Library of Congress: only U.S. copy

I am wondering if the copy of Bertrand Teyou’s  La Belle de la Republique Bananière: Chantal Biya – de la rue au Palais* which I acquired is the only copy of the book here in the United States. Most copies of the book were confiscated by the Cameroon government itself. My search for it did produce a lone copy from the Library of Congress, which was sent me through the modern miracle of the inter-library loan system. I doubt it was an original – but seemed instead to be a Xeroxed copy, its pages poorly cut with a paper cutter, so that some of the text was cut away.

Still there it was, and I read it in its entirety.

For his contribution to our understanding of the psychology of power and female upward mobility in Cameroon Teyou was rewarded by being thrown in prison for six months where he nearly died. He would have, if not for an international campaign to free him that included publicity of his fate by organizations like Amnesty International and PEN International. 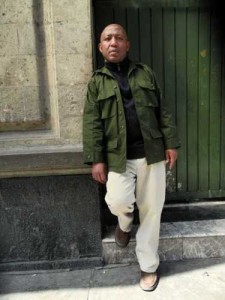 Teyou had been arrested in the Cameroon port city of Douala, a long-time center of opposition, where he had organized a book signing in a local hotel. Copies of the book were confiscated; Teyou was arrested, tried and convicted of “insult to character” and “organizing an illegal demonstration” (a book signing?). Sentenced to two years imprisonment or a fine of near $4,500, unable to pay the fine, Teyou “chose” the prison option.

Explaining why he wrote what amounts to a cruel – but accurate – exposé of the country’s first lady, Teyou commented: “We are entitled to rise against the injustice that is crippling our country. We cannot let evil go unquestioned… This book is the expression of my dissatisfaction with what is going on in Cameroon, especially the macabre system that gives Chantal Biya the leeway to treat people around her with extreme cruelty.”

The international campaign to free Teyou was successful. In poor health, he was released from prison on May 2, 2011. In an act of literary solidarity, the chair of African literature at the University of Bayreuth, in Germany, also offered to pay the expenses for La Belle de la république bananière to be reprinted in German. But Teyou paid an additional price. While in prison, his home mysteriously burnt down, killing his daughter. On his release, Teyou described the New Bell Prison where he was incarcerated as “a death chamber, particularly for the poorer prisoners. Only those who have the possibility of ransoming their way out survive.” Calling New Bell Prison “a concentration camp – not a prison,” Teyou went on to describe the deplorable prison conditions where prisoners were thrown their food on the ground “like animals” and where many inmates went insane as a result of the conditions.

No doubt, Teyou’s portrayal of Cameroon’s “first lady,” Chantal Biya, cuts to the chase, although it is carefully written and documented. Teyou is careful not to accuse her of too much – only passing mention of the lack of transparency of her foundation, suggesting that its funding probably comes from siphoned-off public funds. The fact is that Chantal Biya’s life is so outrageous, corrupt and wasteful – quite frankly, nothing short of a national embarrassment – that most of its details are well known to the country’s populace. But Teyou – who writes extremely well from my viewpoint – puts it all together in a convincing, devastating manner.

Chantal Biya is the second wife of the country’s long-time president, Paul Biya, one of Africa’s longest standing – and least interesting – political leaders. Bastard daughter of a French “cooperant” (a volunteer in France’s version of the Peace Corps) who refused to even acknowledge his fatherhood and a shapely, but dirt poor, Cameroonian mother, Chantal Biya grew up in utter poverty. With little else going for her, she learned early on how to use her good looks to get ahead in the world, in a country where the opportunities for poor girls (and boys) are close to non-existent.

Chantal Biya learned to sleep her way to fame and fortune and did so with much talent and vigor. Having reached the heights of Cameroonian society through her marriage to Biya, Chantal has managed to tighten her grip that much more, as rumors fly in Yaounde, Cameroon’s capitol, that she is working to have the country’s constitution changed so as to be able to replace her husband as president (as if she hasn’t already done so de facto.)

It is interesting how dull middle-aged Third World leaders like Biya and overthrown Tunisian President Zine Ben Ali have chosen vibrant, younger, physically attractive (and usually) second wives. Tunisia’s Leila Trabelsi and Chantal Biya have strikingly similar profiles. An accident or something else? Trabelsi was a hairdresser who learned early on that her upward mobility was based upon sleeping with powerful men. Thus did she pull herself – and her eight siblings – up Tunisia’s economic and political ladder. Chantal Biya started out even poorer.

The combination of older men in need of Viagra and their ambitious, younger wives is the stuff of soap operas. Will the president die of a heart attack? Are the young wives seeking their passion elsewhere? What better way for a poor Cameroonian woman to pass her time while dying of starvation or AIDs than wondering about the sex lives of the rich and powerful?

The younger, energetic Tunisian and Cameroon presidents’ wives added flair to their boring, paranoid husbands. With their “foundation work” Cfunded in large measure from moneys stolen from the public budget – they gave the impression of social involvement, of the country’s making advances in women’s rights, and this in turn makes them popular with French, U.S. political circles. The fact that Leila Trabelsi and Chantal Biya literally come from the street to the palace, touches a chord in many a poor Tunisian and Cameroonian young girl. Maybe she too can have a rags-to-riches Cinderella life, sleeping her way up the social ladder.

An echo of the great Argentinian, Eva Peron, whose journey to power parallels these two?

I believe so. My hunch is that Paris probably encouraged Ben Ali and Biya in their choices of second wives. Of course the two were getting on in age and the thought of a younger consort probably played into their decision. Middle-aged men are susceptible to such things. Of course French advisors have other things in mind beyond satisfying the sexual fantasies of the African leaders whose countries they squeeze dry of wealth. Of course, to corrupt a man sexually – rather easy – is only one step along the way of doing so economically and politically. It’s kind of a package deal.

Paul Biya – a dull and oppressive member of “Francafrique”

As for Chantel’s husband, Paul Biya is a generally dull and uninteresting man who compensates with cunning what he lacks in intelligence, humanity and vision. But cunning alone has not been the key to his political longevity. With no domestic social base to speak of, Biya has been able to remain in power principally as a result of the support he enjoys from Paris, who advise him – run him would be a more accurate term – and train his elaborate intelligence apparatus and police force and military. Biya is a typical African leader within the system known as Francafrique. Elaborate secret agreements give Paris the right to intervene militarily if they see their interest threatened. The Cameroon secret police, trained and run by the French intelligence service is one of the world’s most ruthless. Thus Biya has been the perfect malleable tool of French corporate and strategic interests both in Cameroon and Francophone Africa more generally.

Then there is the more serious problem of the restless masses: how to keep the thoughts of the public away from politics, away from the oppressive state of affairs in which the Tunisian and Cameroonian people find themselves. Of course sports help a lot. People, male and female, get all worked up about their soccer teams, football, whatever. Works like a charm in my hometown Denver, as well as Tunis or Douala. But for those who don’t like to see men (mostly men), kicking the stuffing out of each other once or twice a week in sports stadiums, there is soap opera at the top!

*The Banana Republic’s Beauty: Chantal Biya’s Journey from the Street to the Palace