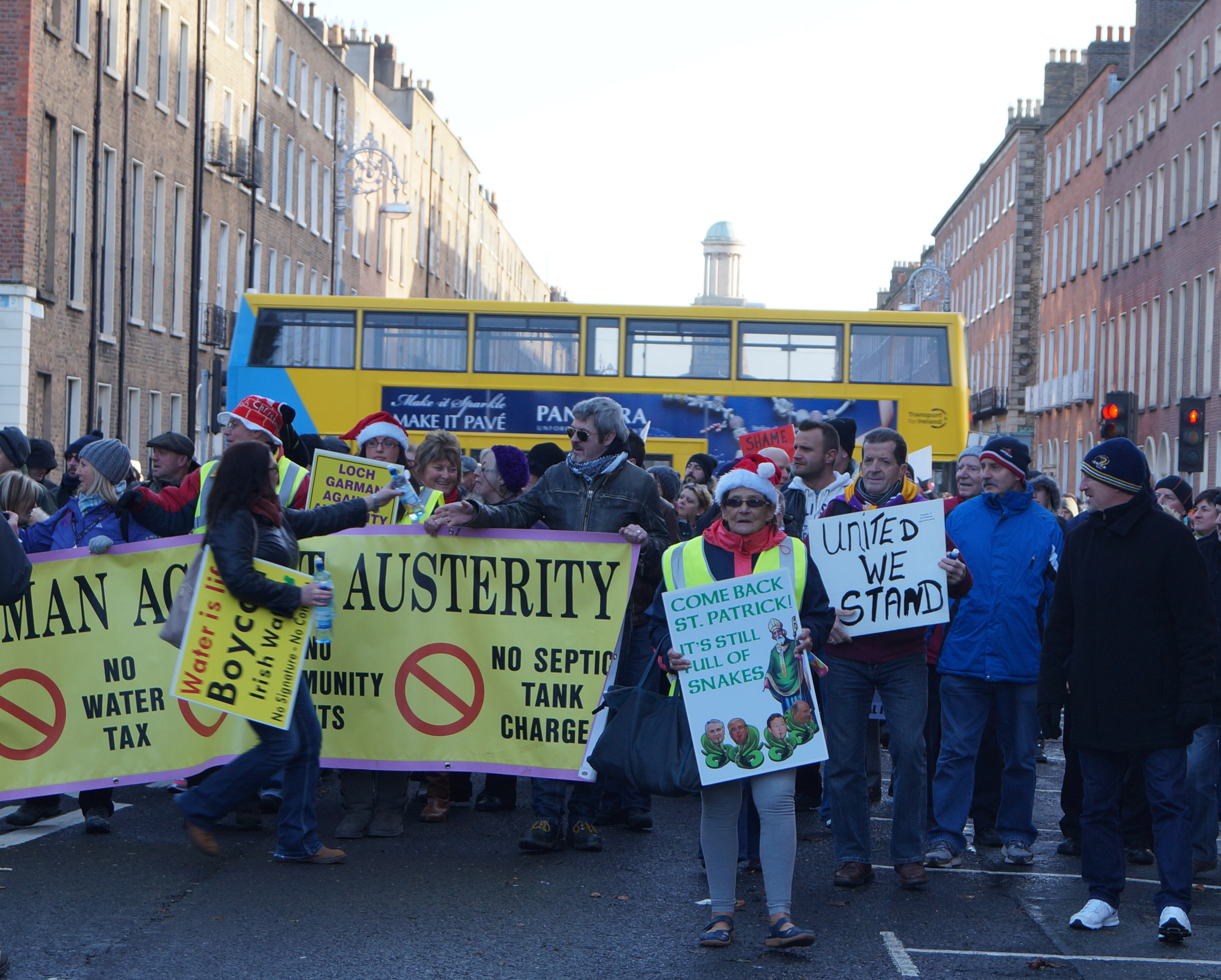 Can the New Left Govern Europe?

After a year of earthshaking victories and devastating setbacks, Europe's new progressive parties are slowly learning how to balance governance with activism.
By Conn Hallinan | February 12, 2016

Over the past year, left and center-left parties have taken control of two European countries and hold the balance of power in a third. Elections in Greece, Portugal, and Spain saw right-wing parties take a beating and tens of millions of voters reject the economic austerity policies of the European Union.

But what can these left parties accomplish? Can they really roll back regressive taxes and restore funding for education, health care, and social services? Can they bypass austerity programs to jumpstart economies weighted down by staggering jobless numbers? Or are they trapped in a game with loaded dice and marked cards?

And, for that matter, who is the left?

Socialist and social democratic parties in France and Germany haven’t lifted a finger to support left-led anti-austerity campaigns in Greece, Spain, Ireland, or Portugal, and many of them helped institute — or went along with — neoliberal policies they now say they oppose. Established socialist parties all over Europe tend to campaign from the left, but govern from the center.

Last year’s electoral earthquakes were triggered not by the traditional socialist parties — those parties did poorly in Greece, Spain, and Portugal — but by activist left parties, like Syriza in Greece, Podemos in Spain, and the Left Bloc in Portugal.

With the exception of Ireland’s Sinn Fein, all of these parties were either birthed by, or became prominent during, the financial meltdown of 2008 that plunged Europe into economic crisis. Podemos came directly out of the massive plaza demonstrations by the Indignados — the “Indignant Ones” — in Spain’s major cities in 2011.

Syriza and the Left Bloc predated the 2011 uprising, but they were politically marginal until the EU instituted a draconian austerity program that generated massive unemployment, homelessness, poverty, and economic inequality.

Resistance to the austerity policies of the “troika” — the European Commission, the European Central Bank, and the International Monetary Fund — vaulted these left parties from the periphery to the center. Syriza became the largest party in Greece and assumed power in 2015. Podemos was the only left party that gained votes in the recent Spanish election, and it holds the balance of power in the formation of a new government. And Portugal’s Left Bloc, along with the Communist-Green Alliance, has formed a coalition government with the country’s Socialist Workers Party.

But with success has come headaches.

Syriza won the Greek elections on a platform of resisting the troika’s austerity policies, only to have to swallow more of them. In Portugal the Left Bloc and the Communist-Green Alliance are unhappy with the Socialist Party’s commitment to re-pay Portugal’s quite unpayable debt. Spain’s Podemos proposed a united front with the Socialist Party, only to find there are some in that organization who would rather bed down with Spain’s right-wing Popular Party than break bread with Podemos.

It is still too early to draw any firm conclusions about what the 2015 earthquake accomplished — and Ireland’s election has yet to happen — but there are some obvious lessons.

First, austerity is unpopular. As Italy’s prime minister, Matteo Renzi, put it after the Spanish election: “Governments which apply rigid austerity measures are destined to lose their majorities.”

Second, if you’re a small economy, taking the power of capital head on is likely to get you trampled. The troika didn’t just force Syriza to institute more austerity: It made the austerity more onerous — a not very subtle message to voters in Portugal and Spain. But people in both countries didn’t buy it, in large part because after four years of misery, their economies are still not back to where they were in 2008.

But can these anti-austerity coalitions force the troika to back off?

A major part of the problem is the EU itself, and in particular the Eurozone — the 19 countries that use the euro as a common currency. The euro is controlled by the European Central Bank, which in practice means Germany. In an economic crisis, most countries manipulate their currencies — the United States, the United Kingdom, and China come to mind — as part of a strategy to pay down debt and re-start their economies. The members of the eurozone don’t have that power.

Germany pursues policies that favor its industrial, export-driven economy, but that model is nothing like the economies of Greece, Portugal, Spain, or even Italy. Nor are any of those countries likely to reproduce the German model, because they don’t have the resources (or history) to do so.

Complicating matters are political divisions among the troika’s left opponents.

For instance, Syriza is under attack from its left flank for not exiting the eurozone. Former Syriza chief economic advisor Jannis Milios charges that Syriza has abandoned its activist roots and become just another political party more interested in power than principles. There are similar tensions in Spain and Portugal.

But what to do next isn’t so obvious.

Withdrawing from the eurozone can be perilous. In Greece’s case, the European Central Bank threatened to shut off the country’s money supply, making it almost impossible for Athens to pay for food, medical, and energy imports, or finance its own exports. In short, they threatened Greece with economic collapse and possible social chaos.

But following the policies of the troika sentences countries to permanent debt, rising poverty rates, and a growing wealth gap. Portugal has one of the highest inequality rates in Europe, and Spain’s national unemployment rate is 21 percent — and double that among the young. Greece’s figures are far higher.

The left coalitions are far from powerless, however. Portugal’s coalition government just introduced a budget that will lift the minimum wage, reverse public sector wage cuts, roll back many tax increases, halt privatization of education and transportation, and put more money into schools and medical care.

Which doesn’t mean everything is smooth sailing. The coalition has already fallen out over a bank bailout, and it disagrees on the debt. But so far the parties are still working together. Jeremy Corbyn, the newly elected left leader of the British Labor Party, hails the Portugal alliance as the beginning of an “anti-austerity coalition” across the continent.

Interesting developments in Spain address the tensions between street activism and political parties. Emily Achtenberg, a long-time housing expert from Boston and an analyst for NACLA, has studied Barcelona’s “Platform of People Affected by Mortgages,” or PAH.

PAH came out of Spain’s catastrophic housing crisis brought on by the financial meltdown of 2008. Some 650,000 homes are in foreclosure, and 400,000 families have been evicted. Worse still, Spanish homeowners are responsible for debts even after declaring bankruptcy — debts that can block them from renting an apartment, buying a home, or purchasing a car.

At the same time, according to the 2013 census, 34 million homes and apartments — 14 percent of the country’s housing stock — are vacant, most of them owned by banks. And since Barcelona has become one of Europe’s tourist magnets, “tens of thousands of once-affordable apartments are marketed to tourists through on-line platforms like Airbnb,” says Achtenberg, exacerbating the situation.

With the help of Podemos, progressive activists linked to CAH and other groups won control of the big cities of Madrid, Barcelona, Cadiz, and Zaragoza last year. Ada Colau, the mayor of Barcelona, is a founder of PAH. She and her allies on the city council have slowed down the evictions, cracked down on unlicensed Airbnb owners, and leaned on the banks to free up vacant homes and apartments.

PAH now has some 200 chapters all over the country and is planning to press the national parliament to end Spain’s “debt for life” law, which traps bankrupt people with crushing debt from their homes. While allied with Podemos, PAH has maintained its political independence, working both sides of the street: sit-ins and protests, and running for office.

“A perennial question,” says Achtenberg, “is whether the impetus for progressive change comes from inside the institution, or from the streets. In Barcelona today, it seems that both strategies are needed, and are working.” As Colau says, for progressive movements, “both are indispensible. For real democracy to exist, there should always be an organized citizenry keeping an eye on government — no matter who is in charge.”

Between Change and Co-optation

Putting people in apartments and raising minimum wages doesn’t overthrow capitalism, but many activists argue that such victories are essential for convincing people that change is possible and that the troika isn’t all-powerful.

They also play to the left’s strong suit: building a humanistic society.

Finding that fine line between change and co-optation isn’t easy, and one formula doesn’t fit all circumstances. Spain has more breathing room than Portugal and Greece simply because it’s bigger. Yet the Portuguese may find their path a bit easier simply because they have allies in the eurozone. As Greek Prime Minister Alexis Tsipras says, “I think it is not so easy to change Europe when you are alone.”

In the end the path may be like that old peace song: “If two and two and 50 make a million, we’ll see that day come ‘round.”