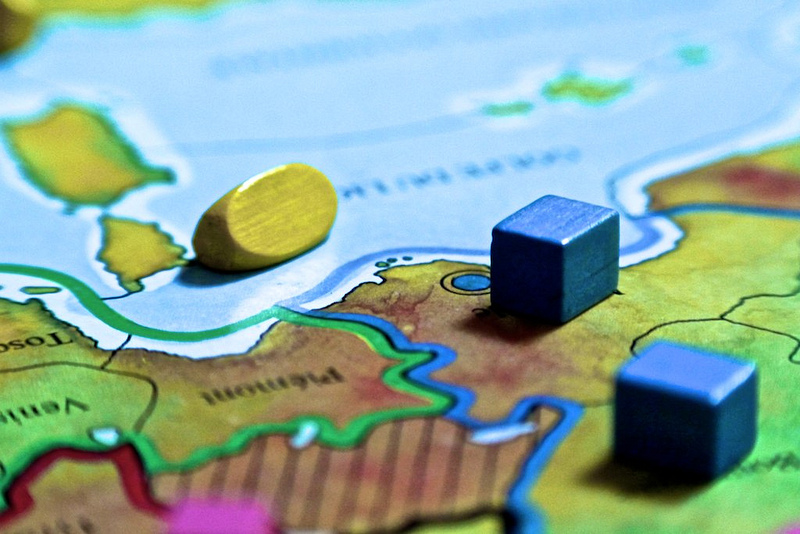 From North Korea to Russia to the Middle East, there's no shortage of deal-making needed. But beware the fine print of anything with Trump's insignia.
By John Feffer | July 12, 2017

Seems like a fair deal — hats off to Trump.

Oh, except that there are a few important caveats to the quid pro quo. The chicken can only be cooked. It won’t be labeled as coming from China. And consumers won’t even know the name of the brand that will market the birds. So, if you’re worried about eating chicken produced in a country with notoriously lax food safety regulations and inspections, stay away from that box of drumsticks in the freezer aisle.

But here’s perhaps the most idiotic part of the deal. The chickens that China cooks have to be sourced from the United States, Canada, or Chile. Chickens can’t fly long distances. But these particular chickens are jetsetters, flying as much as 12,000 miles one way from Chile to China and then another 7,000 miles from China to the United States.

Sorry, Donald: As deals go, this one’s definitely a zonk, as Monte Hall would have put it.

Now, nearly a half-year into his term, Trump needs to demonstrate his dealmaker cred. He’s just returned from the G20 meeting in Hamburg where he’s touted his agreement on Syria with Vladimir Putin. It’s not yet clear whether this ceasefire will stop the fighting in Syria or whether it will turn out to be another crazy chicken deal with its ridiculous stipulations.

Meanwhile, the United States desperately needs to sit down and talk with North Korea to avert war in Northeast Asia. It has to help patch up relations between Qatar and its Persian Gulf neighbors. And it has to find some way to repair ties with Europe in the wake of Trump’s resolute efforts to alienate German and French leadership.

This is the bare minimum of negotiating that the administration needs to do. More ambitious and urgent deals, such as another climate pact or a way for America to rejoin the existing one, are obviously beyond Trump’s interest or understanding. At the same time, Trump’s ability to make any deals in the present is complicated by the deals he or his associates might have made in the past, particularly with the Russians.

But for the sake of world peace, let’s assume that Trump can do something positive. It’s been all too easy to see what Trump minus looks like. What about Trump plus?

On July 4, North Korea crossed a red line that Trump drew in the stratosphere. At the beginning of 2017, North Korean leader Kim Jong Un promised to launch a successful ICBM within the year. Trump tweeted in return, “It won’t happen.”

Now that North Korea has successfully tested something that approximates an ICBM — in reality, it would be difficult at this point to imagine the Hwasong-14 accurately reaching a target in Alaska — Trump must decide how to proceed.

The Trump administration could continue to ignore North Korea — the very strategy it has criticized the Obama administration for adopting. It could go to war, which would be a catastrophe as anyone with even a passing knowledge of the Korean peninsula could tell you.

Or Trump could go with door number three.

North Korea likes to make deals, and it bargains hard. It tries to extract the most money or the most ironclad guarantees from both allies and adversaries. It also sometimes breaks agreements. That, alas, is all too common in geopolitics.

In 1994, the United States managed to retard North Korea’s nuclear program by supplying heavy fuel oil and promising to build two light-water reactors through the Agreed Framework. North Korea secretly pursued a different (uranium enrichment) path to the bomb, while the United States and its partners never built those nuclear reactors. Deal off.

Between 1992 and 1994, Israel attempted to pay North Korea about a billion dollars to stop it from exporting missiles to the Middle East. North Korea even agreed to allow Israeli inspectors on North Korean soil to verify the agreement. The United States, however, blocked the effort. Deal off.

In 2007, because of a deal reached at the Six Party Talks, North Korea began to dismantle its nuclear program in exchange for an easing of sanctions and the removal of the country from the U.S. terrorism list. But a year later, disagreements sharpened over inspections, North Korea grew more recalcitrant, and the incoming Obama administration failed to engage immediately to sustain momentum. Deal off.

What kind of deal would North Korea consider at this point? Of course I’d like to see North Korea mothball its nuclear program. But because of its fear of regime-change efforts, North Korea probably won’t agree to give up its deterrent capability. The United States could still attempt to freeze North Korea’s program as is and explore a moratorium on long-range missile tests (which Pyongyang maintained from 1999 to 2006). The real question is how much sweetener Washington will have to add to its offer, and what that sweetener will look like.

Trump has proven that he gets along great with dictators. For once, he should put this talent to good use.

A Deal with Doha

Exxon CEO Rex Tillerson was a terrible choice for secretary of state for many reasons — his lack of diplomatic experience, his conflicts of interest in the energy sector. But if there’s one place in the world where he should be able to exploit his modest capabilities, it’s the Persian Gulf. In the wake of the falling out between the tiny sheikhdom of Qatar and its neighbors Saudi Arabia and the United Arab Emirates, Tillerson is on his way to the region to see if he can help sort things out.

It’s not going to be easy. Not only does he have to deal with Riyadh, which has presented Doha with a long list of frankly unreasonable demands such as the closure of Al Jazeera, but he also had to do battle with his own administration. President Trump has indicated his own support for Saudi Arabia in this conflict even as his underlings in State and the Pentagon are desperately trying to patch things up. Qatar, after all, hosts Al Udeid airbase (and 11,000 U.S. and U.S.-led coalition forces) and plays a key role in the fight against the Islamic State.

So, first task: Get the president to stop tweeting on the issue. It’s not that difficult. Qatar’s banishment was a full month ago, Trump is easily distracted, and he’s now busy defending his son from charges of colluding with the Russians.

Second task: lower expectations. State Department spokesperson Heather Nauert announced last week that “we believe that this could potentially drag on for weeks; it could drag on for months; it could possibly even intensify.”

Third task: connect with the most promising mediator. Kuwait is the go-to country in this regard. It has remained neutral in the Gulf showdown. It has also tried to mediate other conflicts in the region, such as the war in Yemen. It’s the first stop on Tillerson’s itinerary.

Fourth task: apply leverage. The United States can threaten to reduce Saudi arms sales — which would be an excellent idea anyway — and it can threaten to move its base away from Qatar. Indeed, Washington holds a lot of trump cards in this game.

But first, Tillerson has to maneuver Trump out of the game. To clean up the Gulf mess, I’d choose a former oil exec over a former reality TV star any day.

Reset with Europe (and Russia?)

A picture in The Washington Post shows Donald Trump sitting alone at a table during the G20 summit as other participants socialize behind him. Here is America, in the “solitude of its power,” having “ceased to draw other nations to itself,” as Jean-Marie Colombani wrote immediately after 9/11in his famous Le Monde article “We Are All Americans.”

Of course, Trump supporters will see a very different photo. Snooty Europeans! And there is our defiant president, sticking to his guns and continuing to declare at every turn that America is first.

Indeed, Jeffrey Lord in a CNN commentary, gives Trump 11 out of 10 for his performance at the G20 (because of the apparently inadvertent reference to the movie This Is Spinal Tap, I initially took Lord’s piece to be a satire). “Count on the president’s supporters seeing this as a great win — a win in which Trump stayed true to his campaign promises to put American interests above all else,” Lord writes.

Trump has made no real effort to bridge the distance between himself and European leaders. Indeed, his only other stop in Europe was Poland, where he could commune with a similarly far-right government that hates immigrants, the media, and an open society. The Polish government obliged by bussing in loyalists who could be counted on to cheer a world leader in which only 23 percent of Poles have any confidence.

From adulation, Trump then traveled to consternation. Even otherwise conservative politicians like the UK’s Teresa May have been appalled at Trump’s maladroit moves at the global level. The assembled leaders of the G20 probably would have preferred if Ivanka had substituted for her father throughout the entire proceedings instead of just that one short seat-warming occasion.

In a direct rebuke to Trump’s dangerous and delusional approach to environmental issues, the European Union and the rest of the “G19” issued a final communiqué reaffirming their commitment to the Paris agreement on climate change. It will probably be the last G20 meeting Trump has to worry about — the next summits will be in Argentina, Japan, and Saudi Arabia. Perhaps that’s what he was thinking when he was sitting by himself at the table. Or perhaps he was daydreaming about firing all the other G20 leaders.

The focus of media coverage, meanwhile, was the sideline meeting between Trump and Russian President Vladimir Putin. Controversy continues to swirl over what the two might have said, or promised, concerning the charges of Russian interference in the U.S. election. But let’s take a closer look at the deal-making.

Putin and Trump capped several months of behind-the-scenes negotiations when they announced a ceasefire in Syria as the UN starts up its seventh round of indirect peace talks. Sure, there are plenty of reasons why this ceasefire is flawed. Every previous attempt at stopping the bloodshed has failed. This one covers only one part of the country. Iran did not participate in the deal. Russian police are slated to monitor the ceasefire, but Israel has already said that it doesn’t want Russians across its borders in Syria. It’s a win for Syria’s murderous leader, Bashar al-Assad.

But beware of the fine print on any deal with Trump’s insignia on it. For a businessman who routinely swindled his contractors and filed bankruptcy to escape from his monumental mistakes, the “art of the deal” is all about looking out for number one.

And let’s be clear, number one is not America. It’s Trump himself.