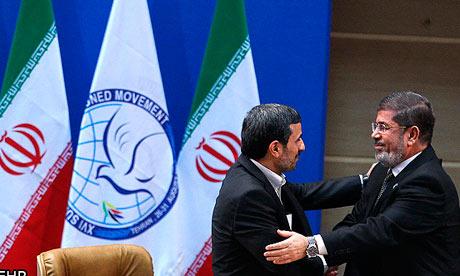 Can Egypt Chart Its Own Course?

Egyptian President Mohamed Morsi has proved willing to act independently of Washington, but he's not about to leave the fold.
By Giorgio Cafiero | September 17, 2012 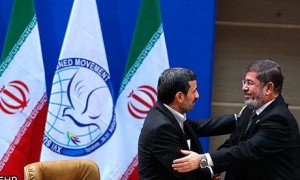 Egyptian President Mohamed Morsi’s bold initiatives on the world stage indicate that the Muslim Brotherhood leader is attempting to pursue a more independent approach to international affairs. By visiting China and Iran before the United States, forcing several high-ranking leaders of Egypt’s U.S.-backed military to retire, and deploying forces within the Sinai, Morsi is boldly challenging the Washington-Tel Aviv-Riyadh axis of power that has defined the Middle East’s order for decades.

Returning from a visit with Chinese President Hu Jintao in Beijing, Morsi attended the Non-Aligned Movement’s (NAM) summit in Iran on August 30. To the dismay of the United States and Israel, Morsi joined officials from 119 other countries and U.N. Secretary General Ban Ki Moon in a demonstration of support for Iran’s nuclear program, despite widespread condemnation for Iran’s position on Syria. As the first Egyptian head-of-state to visit Iran since 1979, Morsi’s attendance was a symbolic victory for Tehran, which has not had diplomatic relations with Egypt since 1980. Less than three weeks earlier, Iranian president Mahmoud Ahmadinejad and Morsi cordially embraced each other at a summit of the Organization of Islamic Cooperation in Mecca, Saudi Arabia.

In Tehran, Morsi outlined a proposal whereby the region’s four most powerful Muslim states – Egypt, Turkey, Saudi Arabia, and Iran – would establish a contact group to supervise a peaceful settlement in Syria. Provided that Iran is the only Middle Eastern government actively supporting Syria’s regime, Morsi’s initiative would bring in opposing stakeholders.

The inclusion of Iran will ruffle feathers in Washington, as U.S. leaders will accuse Morsi of undermining Western efforts to isolate Iran. As Patrick Seale, a British expert on Middle Eastern politics, observes, “President Morsi evidently prefers to resolve the Syrian crisis by negotiation rather than war … In other words, he is telling the United States and NATO to keep out of Syria and leave it to local powers.”

Neoconservatives and liberal hawks like Thomas Friedman have strongly condemned Morsi’s visit to Iran and fear that he is providing legitimacy to the clerical regime. But Morsi isn’t advocating for Iran’s interests. Instead, he is taking steps vis-à-vis Iran to reassert Egypt’s role as a powerful Middle Eastern actor that successfully brokers peace in Syria and acts on the world stage with less dependence on the United States, toward which 85 percent of Egyptians citizens hold an unfavorable view. “Morsi is not talking about Syria to improve relations with Iran,” writes Paul Pillar. “His government is talking with the Iranians to try to do something about Syria.”

Even as U.S. policymakers remain wary of Morsi’s relative independence, his Syrian initiative is conducive to the U.S. interest in resolving Syria’s civil war. As the conflict continues, the security of key U.S. allies (Israel, Turkey, and Jordan) remains jeopardized. Al Qaeda’s exploitation of Syria’s conflict should alarm Washington, especially when the risk of the regime’s weapons of mass destruction falling into the hands of non-state actors is factored into account. Regardless of U.S. opposition to Iranian influence in Syria, the Obama administration would be wise to avoid the mistakes of previous administrations that sought to pursue a diplomatic agenda in the Middle East without treating Iran as a relevant actor.

Indeed, the United States and Israel have each paid a price for their attempts to marginalize Iran over the years. When the United States felt invincible in the aftermath of the first Gulf War, the George H. W. Bush administration excluded Iran from the Madrid Conference of 1991, which sought to resolve the Palestinian-Israeli conflict. In response, the Islamic Republic dramatically increased its support for armed rejectionist Palestinian factions that launched deadly attacks against Israelis throughout the 1990s, thus derailing the “peace process.” Until the Madrid Conference, no act of terrorism directed against Israeli citizens had Iranian fingerprints. Years later, when U.S. efforts to stabilize Iraq after the 2003 invasion were failing, the George W. Bush administration stubbornly refused to engage Iran diplomatically until half-hearted measures were taken in Bush’s second term. By sponsoring Shia militias that killed scores of U.S. troops, Tehran certainly made Washington pay for its exclusion of Iran.

Today, if negotiations over Syria are held without Iran, the Iranian regime will have no interest in the initiative’s success. Under such circumstances, Tehran will likely continue to support Syria’s pro-Iranian militias and derail any peace process.

The Limits of an Egyptian-Iranian Rapprochement

By meeting with Mahmoud Ahmadinejad in Saudi Arabia and attending the NAM summit in Tehran last month, Morsi has opened the door for a new chapter in Egyptian-Iranian relations. Nonetheless, two important factors will limit the extent to which Cairo and Tehran can improve bilateral relations.

The first is Egypt’s economic dependency on Saudi Arabia. The hundreds of thousands of Saudi tourists who vacation in Egypt each year and the hundreds of thousands of Egyptians employed in the kingdom who send remittances across the Red Sea are extremely valuable to Egypt as it grapples with the grave economic challenges of the post-Mubarak era. Egyptian dependency on foreign aid provides Saudi Arabia with leverage that will further limit the extent to which an Egyptian-Iranian rapprochement can develop. Although Riyadh promised Cairo $4 billion in aid after Mubarak’s ouster, according to David Ottaway, “they’ve only provided a little under $2 billion so far. They will watch and wait to see what the new Egyptian government does vis-à-vis Iran before it hands out the other $2 billion. The Saudis are certainly going to make it clear that the Egyptians should not have a close relationship with Iran.”

Second, although Egypt seeks to include Iran in discussions surrounding the Syrian conflict, Cairo and Tehran have polar opposite agendas in Syria. Whereas Morsi stated that the Assad regime should “disappear from the scene” and compared the Syrian opposition’s struggle to that of the Palestinians, Iran views its alliance with Syria as vital to ensuring its strategic posture in the Levant. Egypt (90-percent Sunni Muslim) and Iran (90-percent Shia Muslim) are also on opposite sides of the regional sectarian divide. It is reasonable to assume that sectarian divisions may also polarize Cairo and Tehran’s agendas elsewhere, particularly in Lebanon and Iraq. Washington and Riyadh are unquestionably banking on this division to keep Egypt a close ally of Saudi Arabia at Iran’s expense.

The fact that Tehran appointed an ambassador to Cairo while Egypt, as of this writing, has not reciprocated likely indicates Morsi’s hesitancy to entirely normalize relations. Moreover, although Morsi’s trip to Iran received much attention, his first international trip as president was to Saudi Arabia, indicating the value that his government places on Cairo’s relationship with Riyadh.

Egypt in a New Middle East

Egypt has the largest population and most powerful military in the Arab world. Egypt’s alliance with the United States and the Saudi-led Gulf Cooperation Council, in addition to its neutrality in the Arab-Israeli conflict since 1979, has greatly facilitated the Washington-Tel Aviv-Riyadh axis of power. However, as a democratically elected leader, Morsi will necessarily be pressured to cater to Egyptian public opinion, which was overwhelmingly opposed to Mubarak’s foreign policy. As Seale noted, “Many Egyptians have a certain feeling of guilt about the 1979 peace treaty with Israel. They know that, by removing Egypt from the Arab military equation, the Treaty gave Israel more than thirty years of unchallenged military dominance – and with it the freedom to strike its neighbors at will, without the risk of being hit back.”

The outcome of the struggle between Egypt’s democratically elected Islamist president and the U.S.-backed military will determine much about Morsi’s capacity to conduct a foreign policy independent of Washington. Regionally, the nuclear-armed Israel—which defeated Egypt’s military in 1948, 1967, and 1973—will remain the militarily dominant actor. The Egyptian government, which struggles to provide services for its tens of millions of impoverished citizens, cannot contemplate the idea of war with the Jewish state. The massive sums of foreign aid on which Egypt depends will thwart Cairo from excessively antagonizing Riyadh by pursuing closer relations with the Islamic Republic of Iran. Additionally, Morsi will certainly take steps to maintain cordial relations with Washington while simultaneously reaching out to Chinese and Iranian leaders as American influence in the region declines.

One can expect President Obama to have strong words for Morsi when he visits the White House in December, as Washington’s efforts to isolate Iran may be jeopardized by an Egyptian-Iranian rapprochement. Nonetheless, considering America’s three decades of support for the dictator who once imprisoned Morsi—along with its policies vis-à-vis Iraq and Palestine that most Egyptians detest—Egypt’s democratically elected president may cater more to the will of his people, rather than a foreign government intent on keeping Egypt within its sphere of influence.