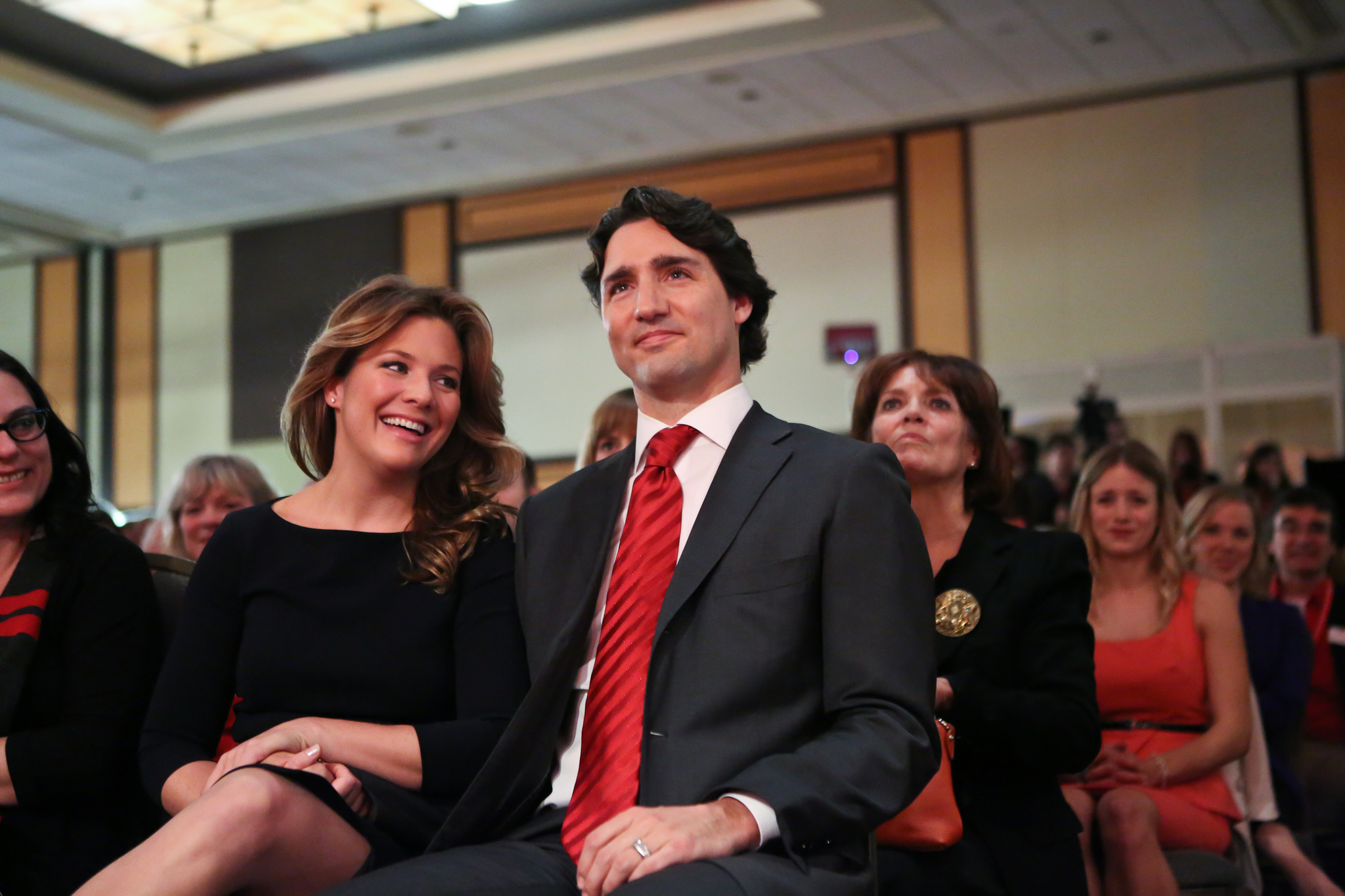 The victory of Canada's Liberal Party was a mixed one for the country's left. But from pulling out of Syria to (maybe) legalizing marijuana, they're welcoming the change in governance.
By Stuart Trew | October 21, 2015

Nearly a decade of Conservative rule in Canada has come to an end with the dramatic election victory of the centrist Liberal Party.

The message wasn’t complicated: Canadians demanded change and an end to the “politics of fear,” as the young and charismatic Liberal leader Justin Trudeau put it. Polls consistently backed up these claims throughout the long (by Canadian standards) 78-day campaign.

The question, up until the vote itself, was which of the main opposition parties — the centrist Liberals or the more left-leaning New Democratic Party — could provide that change by defeating the Conservatives.

An Opening for Liberals

The NDP entered the election campaign in the lead. But an overly cautious campaign by leader Thomas Mulcair, once Quebec’s Liberal environment minister, failed to excite undecided voters while turning off the party’s base.

Mulcair was criticized for running to Trudeau’s right on some issues, despite having a more progressive platform overall. Instead of highlighting the party’s plans for a badly needed national pharmacare program, for example, he chose to front cuts to small business taxes. On climate change he was timid, endorsing an ineffective carbon trading scheme and wobbling between support and opposition to a controversial oil pipeline that would carry Alberta bitumen to Atlantic ports.

To be sure, there were important promises in the NDP platform to create thousands of new child care spaces and — in a cry increasingly echoed south of the border — to raise the federal minimum wage to $15 an hour. But the party ended up fighting media skepticism about the costs of its proposals. Frustratingly for NDP supporters, Mulcair’s subsequent promise to balance the budget was then ridiculed by some of the very same journalists after Liberals announced a plan to run deficits, profiting from historically low interest rates.

Liberal and NDP support in the polls reversed around this point, giving Trudeau the freedom to embrace using public debt to stimulate a stagnant Canadian economy through badly needed infrastructure investments and other job-creation interventions — staples of progressive domestic policy on both sides of the U.S.-Canada border.

However, it would be wrong to say that Canadians voted en masse for stimulus spending on October 19. They voted against Stephen Harper.

After winning a majority government in 2011, Harper’s Conservative government waged an all-out war on civil society, parliamentary democracy, the environment, organized labor, indigenous First Nations, and anyone else that posed an obstacle to the government’s priorities.

First among these was Harper’s plan to reposition Canada as an “energy superpower” — or, as Foreign Policy magazine once put it, a “reckless petrostate” — followed closely by his party’s ideological commitment to cutting Canada’s social safety net and lowering taxes.

The Conservatives aggressively pursued fossil fuel development, wrote recommendations from the industry verbatim into new legislation, and turned Canada into an international “climate pariah” by withdrawing from the Kyoto protocol. They also drained finances from public services and introduced new labor legislation making it more difficult to certify — and easier to de-certify — new unions. Services for veterans and federal food and rail safety inspections suffered from lack of funding.

On the world stage, meanwhile, the mythology of Canada as a peacekeeper was replaced in government propaganda by Canada the strong U.S. ally and warrior nation. When he led Canada’s parliamentary opposition, Harper eagerly supported the Bush administration’s wars in Iraq and Afghanistan. In government, he backed the Obama administration’s air strikes against the Islamic State in Iraq and Syria.

In particular, the federal relationship with Canada’s First Nations deteriorated to new lows, despite a historic 2008 apology for the abuse suffered during Canada’s long residential schools system — a late 19th and early 20th century program to forcibly assimilate indigenous children, which resulted in thousands of deaths from disease and neglect.

Indigenous frustration with the Harper government’s intransigence on treaty rights, inadequate funding of First Nations infrastructure and social programs, and outright dismantling of Canada’s environmental assessment regime gave way to the Idle No More campaign, an indigenous-led movement to resist government encroachment on the environment and native sovereignty.

Electoral mobilizations followed. The national chief of the Assembly of First Nations, breaking a tradition of non-partisanship, said in September, “I will vote in this federal election in support of a government committed to closing the gap between First Nations people and Canadians. I continue to encourage all First Nations people to vote.” Indigenous Rock The Vote campaigns across Canada mobilized young people in huge numbers.

Turnout was so much higher than expected in some northern communities that they ran out of ballots.

In a practice worth of Nixon, the Harper government developed lists of “enemies” from civil society that were to be kept away from government decision-making, much of which took place at the very top.

In parliamentary committees, when civil society groups challenged certain pieces of legislation — for example, the final text of a free trade agreement, or reforms to Canada’s electoral law that risked disenfranchising tens of thousands of voters — their evidence was at best ignored. At worst, indigenous groups, environmental organizations, and social activists who spoke out in the media were demonized by the government, threatened with defunding, and even likened to terrorists.

Following a terrorist attack in Ottawa last year, the government introduced “anti-terrorism” legislation in January that sanctioned egregious civil liberties abuses by state security agencies if they could argue that doing so would make Canada “safer.”

Worringly, the law expanded the network of government agencies responsible for collecting information on Canadians whose activities could be alleged to threaten the security of Canada, including its economic security. A consensus emerged among privacy experts, civil liberties advocates, and a list of former prime ministers and government officials that under these terms, nonviolent people asserting their right to contest major resource projects (like tar sands development, for instance) could find themselves on a terrorist watch list.

As a result, many Canadians felt targeted more than governed — especially Canadian Muslims.

As the election drew close, the Conservatives they ran a xenophobic campaign that disparaged Syrian refugees, fomented mistrust of Canadian Muslims, promoted legislation to strip Canadians found guilty of terrorism-related offenses of their citizenship, and promised to ban Muslim women from wearing the niqab during citizenship ceremonies or while performing public sector work.

That fear-mongering campaign looked successful at first, but the negativity wore off, and the NDP — the party that most overtly challenged the anti-niqab campaign — was unable to capitalize. By then, Trudeau was running an attractive, optimistic campaign on a promise to change more than the government’s policy direction: He promised to change the very way government interacts with the public.

At first glance, the Liberal victory was a superficial one for the left.

On many of the most important issues to Canadian social justice activists, the Liberals are somewhat out of line. For example, though he promised to set binding carbon emissions reduction targets in international climate talks later this year in Paris, Trudeau has publicly supported the Keystone XL pipeline. His party endorses the yet-to-be-ratified Canada-EU Comprehensive Economic and Trade Agreement, and will almost certainly back the Trans-Pacific Partnership, even though it was negotiated entirely by the outgoing Conservatives. Instead of national child care, the Liberals promise bigger (undoubtedly important) monthly checks to families with children.

Meanwhile the more left-leaning NDP was reduced to 44 seats in Parliament, where Conservatives now form the main opposition. With few exceptions, Canada’s daily newspapers endorsed Stephen Harper for a fourth term on what they thought to be the strength of his economic policy. (He was a jerk, but he was “our” jerk, they implied in editorials shrugging off the government’s anti-democratic tendencies.) This will create significant rightward pressure on the Liberals, despite running on a progressive platform.

But in an important way, we can already feel the change in governance.

The Liberals have promised to publicly scrutinize the Trans-Pacific Partnership when it’s finally released on November 4. They’ve started to negotiate with First Nations on an inquiry into missing and murdered indigenous women, a major issue the Conservatives had long refused to engage with. And Trudeau used his first conversation with President Barack Obama to announce that he’d be pulling Canada’s planes out of the Syrian mission and cancelling the country’s participation in the F-35 fighter jet program, a costly boondoggle that’s long been a leading priority of the U.S. military-industrial complex.

The Liberals may also make Canada the first country in North America to legalize marijuana.

It’s as if the newly elected Liberals are trying to erase the memory of Harper’s Conservatives. Canadians haven’t elected a naturally progressive party in the Liberals, but they do have one currently intent on implementing a progressive campaign that will improve many people’s lives. They also have an opportunity to revitalize their democracy, which had been sidelined and nearly dismantled by the previous government.

In the end, this election forces the Canadian left to be more organized outside of Parliament while reopening long closed doors to collaborate on policy-making inside government.

Stuart Trew is the editor of The Monitor, the Canadian Centre for Policy Alternatives’ national magazine, and a co-editor (with Teresa Healy) of The Harper Record 2008-2015. Follow Stuart on Twitter @StuJT.