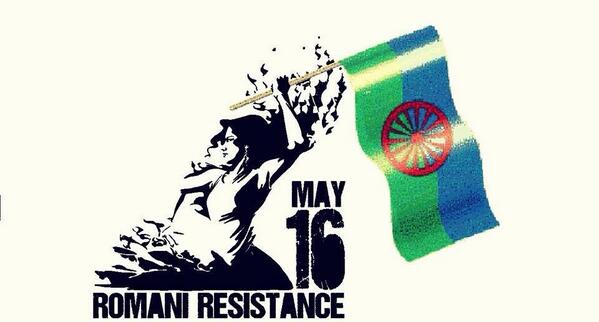 A growing movement among Roma activists looks to celebrate their ancestors' resistance to persecution — and to pick up where they left off.
By Margareta Matache, Jacqueline Bhabha | May 15, 2015

On May 16, 1944, the Nazis scheduled the extermination of the Roma in the Auschwitz II-Birkenau’s Zigeunerlager. But the transfer of the Roma to the gas chamber met with vigorous resistance. Approximately 6,000, Roma alerted to the Nazis’ extermination plans, barricaded themselves in the Zigeunerlager buildings and prepared to fight back against the German SS. The guards withdrew in the face of this uprising.

This event is now commemorated annually on May 16 as Romani Resistance Day.

These accounts of resistance are largely missing, however, from the history of Roma persecution — not only from history books, but also from the Roma movement’s own account of key events. In contrast, Jewish resistance to Nazi rule has become part of the broader discourse though research, literature, and popular culture.

Only a few modest initiatives are dedicated to raising awareness of Roma resistance. Over the last five years, several groups of Romani activists have started to cultivate a language of “pride” and to organize a youth movement drawing inspiration from the historical Romani resistance to the planned extermination in Auschwitz.

These actions build on the need for a broader debate on reparations for historical injustices. Following the example of other movements pressing for reparations, the Romani movement is acknowledging the ongoing legacy and moral debts arising out of both past and ongoing racist violence.

Roma activists are looking to other movements for inspiration. Reparations occupy a central place in the contemporary discussion of U.S. racial inequality and the continuing impact of slavery and Jim Crow laws on American society. Native American communities are also engaged in a consideration of reparation claims and strategies for advancing them. Also, 14 Caribbean states are seeking reparations from the UK, France, and the Netherlands regarding the losses caused by centuries of slavery.

Precedents exist for enforcing such claims. New Zealand has given Maori tribes compensation for injustices caused during the colonial period dating back to 1840. The British government has compensated 5,228 elderly victims of colonial torture during the Mau Mau uprising in the 1950s in Kenya. North Carolina passed legislation to compensate victims of forced sterilization from 1929 to 1970.

Roma and the Holocaust

The most extensive enactment of reparation measures is the German program of payments following the Holocaust.

However, the failure to fully acknowledge the impact of the Holocaust on the Roma has long been a contentious issue. Various programs have given monetary compensation to specific groups of victims, such as Jehovah’s Witnesses, people with disabilities, and LGBT victims — some of which have included Roma. But no reparation programs designed exclusively for Roma victims exist.

For instance, in Romania — home to one of the largest Roma populations in Europe — victims were granted 7,000 euro in compensation. But due to the lack of awareness and gaps in implementation, many Romani survivors have not benefited from the program. And these monetary compensations have not been part of a robust structural reparations policy. Public acknowledgement of responsibility and culpability for Roma extermination policies is still lacking, as are post-trauma support for survivors and a commitment to promoting solidarity among non-Roma with Romani survivors and their descendants.

There’s at least been some success at the regional level. The European Parliament, for example, recently proclaimed August 2 as the European Roma Holocaust Remembrance Day. Perhaps high officials in all European countries can now start marking this commemoration through state memorial ceremonies and public acknowledgments.

Equally unknown is the 500-year period of Roma slavery across an extensive area of what is now Romania. Other instances of slavery — including Spain’s shipping of Roma slaves to the Americas in the 15th century and English and Scottish transports of Roma slaves to Virginia and the Caribbean in the 17th and 18th centuries — are also largely forgotten. Though Roma have attempted to preserve the memory of these past persecutions, scholarly inquiry falls far short of the need for reparations and recognition.

There are several different aspects to the debate about Roma reparations.

First, governmental measures for social inclusion have failed to relate present Roma circumstances to the losses that the Roma community has experienced through forced assimilation, sterilization, the Holocaust, and slavery. In reinforcing stereotypes about Roma victimhood, the contemporary institutional focus on poverty has not created a sense of social responsibility and solidarity toward the community.

Second, a prerequisite for reparations involves a pledge by both state institutions and the broader citizenry to acknowledge past injustice and to start ensuring equal treatment for the oppressed groups.

Yet half of the Romani children in some European countries are still affected by school segregation. Police abuse, relocation of Roma into environmentally toxic areas, separate buses for Roma, and illegal expulsions continue to be accepted or perpetrated by official institutions in Europe. Pogroms, anti-Roma marches, hate crimes, and high levels of rejection characterize the recent attitudes toward significant minorities among the non-Roma population in some European cities and districts.

Anecdotal accounts suggest the presence of significant discrimination in Latin America and the Middle East, too. A large portion of the roughly 14 million Roma across the world continue to endure exclusion, violence, and blunt discrimination.

So governments have failed to ensure a radical structural and moral break with the legacy of past Roma persecution. A debate on reparations may seem premature in such conditions. However, through a reparation program aiming for recognition and acceptance of the past guilt, officials and ordinary citizens might be better prepared for a real break with the past and for the advancement of just policies and interactions with the Roma.

Against this bleak backdrop, some steps have been taken toward a reparations agenda for the Roma.

The government of the Czech Republic, responding to the UN Human Rights Committee’s criticism, announced a bill to compensate Romani women unlawfully sterilized in the former Czechoslovakia. The Swedish government has appointed a commission to examine the atrocities committed against the Romani people before the 2000s. The Norwegian prime minister apologized to the Roma for the racist, exclusionary policies perpetuated by Norway before and after World War II and announced a plan for compensation. These initiatives set the basis for a broader agenda on reparations for Roma victims of state persecution all over the world. Along with monetary compensations, reparation measures should clearly address rehabilitation and guarantees of non-repetition.

As a disenfranchised global diaspora, the Roma have a special claim to reparation for harms going back centuries. To move forward, in an era of increasingly global interconnections and of international memorialization of past atrocities, the claims of the Roma should be discussed in conjunction with the reparation claims of other groups across the world.

Even more, as a resilient and surviving minority, the Roma need to acknowledge and celebrate more actively their resistance and that of their predecessors in face of exclusionary policies and racist attitudes. The Roma prisoners in the Zigeunerlager who courageously fought back against the Nazis were killed a few months later on August 2. But their bravery, as well as other instances of resistance to slavery, pogroms, forced assimilation, and present-day acts of violence, should not remain obscured by the sense of victimhood that dominates Roma narratives. It’s time, once again, to stand up and fight back.

Dr. Margareta Matache is an instructor at Harvard’s François-Xavier Bagnoud Center for Health and Human Rights and the former director of the Roma rights group Romani CRISS. She’s the author the human rights quarterly The Deficit of EU Democracies: A New Cycle of Violence Against Roma Population.

Jacqueline Bhabha is the director of research at Harvard’s François-Xavier Bagnoud Center for Health and Human Rights and a professor at the Harvard School of Public Health. She’s the author of Child Migration and Human Rights in a Global Age.