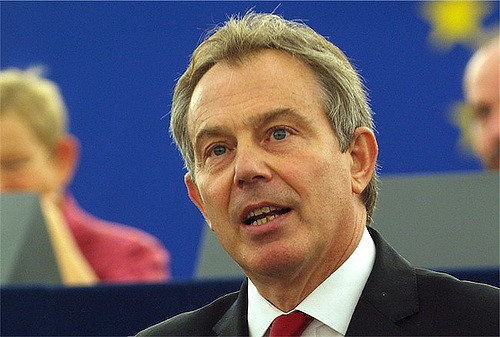 The term “center” is in the eye of the beholder: To Tony Blair it’s much further right than it once was. (Photo: Matthew Yglesias / Flickr Commons)

Tony Blair, the former British “Labour” Prime Minister, has an Op Ed piece about the outcome of the Brexit vote the New York Times on June 26. He concludes (final sentence): “The center must hold.” What that means isn’t clear, and beyond that he has nothing to propose.

No surprise from the man whose view of “the center” was total partnering with George W. Bush in the disastrous wars on Iraq and Afghanistan.

But that “center” can’t hold.

If the turbulent times we’re living in tell us something, it’s that the “status quo” is untenable, actually failing everywhere. The prevailing social system of escalating inequality — call it globalization, imperialism or capitalism — is producing consequences it cannot control. So anti-establishment desperation mounts feverishly in a variety of sometimes diametrically opposite political directions.

Blair’s most demoralizing pitch in favor of his vague “center” is to equate so-called “extremism” of the left and the right. I guess there’s a reason why that’s such a common ploy for establishment politicians and supporting media. You don’t have to offer answers to difficult problems. Just lay claim to “common sense” and label activism for social change as extremist, radical and unrealistic. Some people feel comfortable being in the “middle”. But it would be an insult to Blair’s intelligence and experience to suspect him of naiveté. He surely knows that the rising neofascist bigotry promoted by Trump, Le Pen, and British racists is the very antithesis of social protest movements against austerity, racial injustice, and corporate greed.

Events here and elsewhere mark this as a time of political shake-ups and surprises. Most of all, we don’t want to be surprised by the election of Il Duce Trump. Neither do many millions of Americans whether they think of themselves as middle-of-the-roaders, liberals, independents, progressives, Democrats, or Republicans who feel betrayed. From that standpoint, there is an undefined political center quite apart from Blair’s limiting conception.

This election may be birthing a movement for change suited to these difficult times. That would be a thriving independent Left determined to see significant social change, a Left which respects and receives respect from every individual, organization, and political party committed to turning the tide against the bigotry and fascist tendencies rife today.