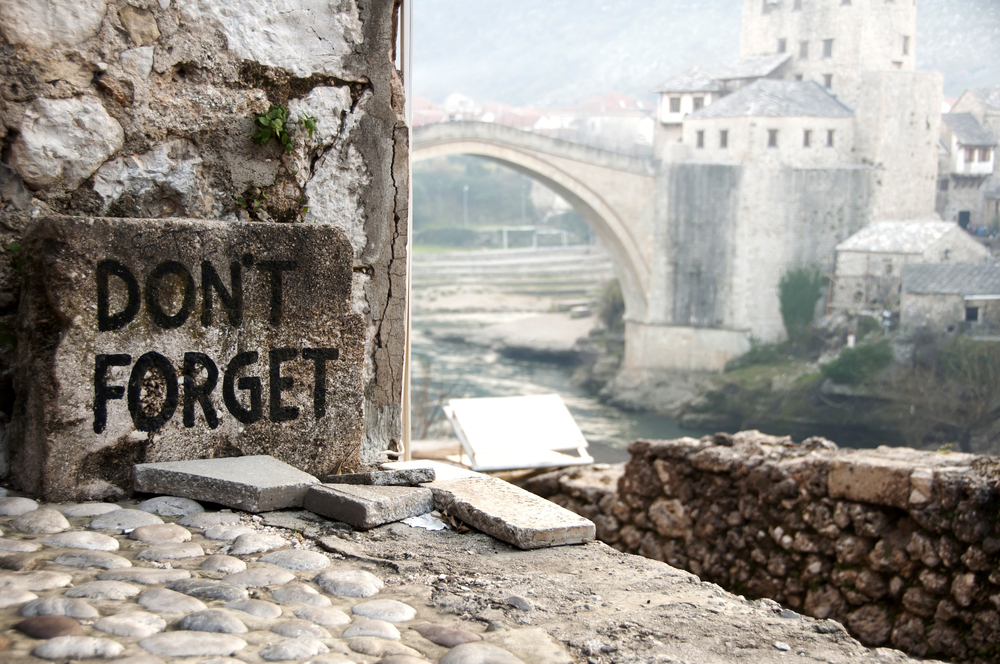 Changing My Mind on Ukraine

Bosnia did not get the support it needed 30 years ago to defend itself. Today it is barely a state, and that's the fate that Ukraine needs to avoid.
By John Feffer | December 7, 2022

In the early 1990s, as the war in Yugoslavia spread to Bosnia, I took what I considered to be a principled position. I backed the UN-imposed arms embargo to the region. I urged friends and colleagues not to support actions to escalate the war. I believed that I was in the pro-peace camp. I hoped for a ceasefire. I yearned for more resolute diplomacy. I was sickened by all the bloodshed.

The war had begun in earnest in 1991, particularly after Croatia declared its independence from Yugoslavia that June. Ethnic Serb enclaves in turn broke away from Croatia, and the Yugoslav army intervened on their behalf. Beginning with the siege of Vukovar in August, the war escalated with terrifying rapidity.

In early 1992, the war spread to the multiethnic republic of Bosnia, after ethnic Serbs there followed the example of their brethren in Croatia and created their own Republika Srpska. In late February 1992, Bosnia held a referendum on independence. The result was overwhelming: over 99 percent wanted Bosnia to become a new state. Many ethnic Serbs, however, boycotted the vote. The government of Alija Izetbegović nevertheless went ahead and declared Bosnia independent on March 3.

As soon as Bosnia declared independence, Serbia widened the war by “defending” Serbian-controlled areas of the new state. The Bosnians formed an ad hoc partnership with Croatian forces, and the war devolved into a succession of atrocities: the siege of the capital Sarajevo, the massacres of Bosnians in Srebrenica, the widespread ethnic cleansing. Ethnic Serbs committed the lion’s share of these atrocities.

Bosnians appealed to the outside world for money and arms to fight back and preserve their new country. Except for some majority-Muslim countries that provided aid and a few fighters, those appeals fell on deaf ears. ”Unfortunately, what is happening in Bosnia is that the world is sitting and watching the most advanced Muslim community in the world being wiped out,” Adnan Iskandar of the American University in Beirut said at the time.

I was horrified by the violence that had accompanied the break-up of Yugoslavia. I was clear that Serbian aggression was responsible for the wars even if nationalists elsewhere in the disintegrating country had abetted those wars. And I roundly criticized the knee-jerk “pro-Serbian” analyses of some leftists who parroted the propaganda of strongman Slobodan Milošević’s government just as naïve leftists unwittingly follow Kremlin talking points on Ukraine today.

Nevertheless, I opposed the transfer of weapons to the Bosnians because I thought it would simply add fuel to the fire of the conflict. I was firmly in favor of the further integration of Europe, not the further disintegration of its border regions.

I was wrong about not helping Bosnia with weapons. My misreading of that war—and my analysis of what has happened to Bosnia since the war—explains in part why I support Ukraine today.

The wars in Yugoslavia ended because the primary aggressor, Serbia, was defeated militarily. In the first case, in August 1995, the U.S.-assisted Croatian army expelled ethnic Serbian militias from land it controlled in Croatia and Bosnia in what was then the largest military campaign in Europe since World War II. The Croatian army committed various war crimes during Operation Storm, including the expulsion of tens of thousands of ethnic Serbs and the execution of civilians, though international courts subsequently rejected the Serbian claim of genocide.

In the second case, NATO bombed Serbia from March to June 1999, forcing it to pull its troops out of the disputed region of Kosovo. NATO never received authorization from the UN Security Council, so the bombing was technically in violation of international law. A number of civilians also died as a result of the attacks, including three Chinese journalists when the Chinese embassy in Belgrade was hit.

Sometimes wars end in stalemates. Sometimes one side is decisively defeated. The conflict in Ukraine, at this point, could go either way. Given that Russia is a powerful country with nuclear weapons, the Serbia scenario will probably not happen. Putin, unlike Milosevic, is unlikely to be toppled by a popular uprising and then trundled off to a war crimes tribunal. But the Russian army could still be decisively defeated in its effort to bite off as much of Ukraine as it can chew. Ukraine has the will and, unlike Bosnia, the capacity to defend itself.

How the war ends in Ukraine is important, but equally important is how the future peace is constructed.

The Problem with a Dictated Peace

Serbia lost the war in Bosnia. But Bosnia did not win. It didn’t have a sufficient military force to dictate facts on the ground.

So, the Dayton Accords imposed a faulty peace on the country that continues to plague Bosnia today. As a result of Dayton, the military conflict among Bosniaks, Serbs, and Croats has been transposed to a political register. Instead of fighting it out with weapons, the three principle groups now battle each other in the unwieldy political institutions that Dayton created. This is good, in that people are no longer killing each other. It is bad, however, in that Bosnia is today barely a country.

There are two principle parts of Bosnia: Republika Srpska and the Federation of Bosnia-Herzegovina, which consists of the often-quarrelsome duo of Croats and Bosniaks. These two autonomous entities also jointly administer a third area, the Brcko District. The presidency rotates among three members, a Serb, a Croat, and a Bosniak, elected by their respective communities. The ethnic divisions that gave rise to the war—exploited by opportunistic politicians—has resulted not in a democracy but an ethnocracy.

Nor does the country really function as a country, not with the Republika Srpska continually threatening to secede from the state, Croats perpetually tired of being a junior partner, and Bosniaks wanting a unitary state that better reflects their demographic majority (50.1 percent of the population compared to 30.8 percent Serbs and 15.4 percent Croats). The elections that periodically take place have been called “the most complicated in the world.” A foreigner actually administers the territory like a neocolonial governor. German politician Christian Schmidt, the High Representative for Bosnia Herzegovina, demonstrated his neocolonial role by  intervening in the most recent elections this year to unilaterally impose changes in the election law.

Bosnia has applied for membership in the European Union, which is one of the few things that most citizens of the benighted state support. Despite this support, the divided political institutions can’t agree on the constitutional, judicial, economic, and other steps necessary to qualify for EU membership. Corruption is rampant, the per-capita GDP of roughly $6,000 puts it at least $3,000 behind the EU’s poorest country, Bulgaria, and nearly half of all young Bosnians want to leave because their future inside the country looks bleak.

The Dayton Accords froze in place many of the dynamics that tore Bosnia apart in the first place. The prospect of future EU membership could serve as the force to push the country together, just as accession for Serbia can encourage greater democracy in that country and accession for Kosovo can help smooth the way for its international recognition.

Whether this happens or not, however, Bosnia is just the kind of solution that Ukraine is trying to avoid. Anyone who believes in a just peace in Ukraine must consider all the strategies that can forestall the Bosnian fate. These strategies all involve reducing Russian occupation of territory and involvement in Ukrainian affairs to as little as possible.

Avoiding a Dayton “Solution” in Ukraine

Serbia continues to play a spoiler role in Bosnia because of its close relations with Republika Srpska. That’s the fallback position Putin would accept if he can’t absorb all of Ukraine into Russia or install a puppet government in Kyiv. He will use the Donbas and Crimea to disrupt the functioning of Ukraine just as Serbia interferes in Bosnia through its proxy.

As an all-but-failed state with uncertain borders, Ukraine wouldn’t be able to qualify for EU membership. With an economy devastated by Russia’s relentless attacks, Ukraine would not a pose any economic threat to Russian interests. Disarmed and neutral, Ukraine could be invaded at will by any future Russian government that doesn’t like what its neighbor is doing.

Of course, I’m not the only one who sees the parallels with Bosnia. Here’s Hamza Karčić, an associate professor at the University of Sarajevo:

If Zelenskyy ​​were forced to allow autonomy in the east, he would risk overseeing the establishment of a Republika Srpska-type entity. This would effectively give pro-Russian rebels a say in the governance of Ukraine, likely through veto powers akin to those of Republika Srpska, which would render the country dysfunctional like Bosnia has been. This would not only upend the development of the country but also block its integration into the EU and NATO.

To avoid this scenario, Ukraine has to win. It has to preserve the very sovereignty that Putin pretends to support, at least in theory, with his “sovereignist” foreign policy. It has to use force of arms not only to repel the Russian invaders but to prevent the kind of “frozen conflict” that Russia has used so effectively to hamstring Georgia and Moldova after earlier military interventions in those countries.

It’s not clear whether Ukraine can recapture Crimea or all of the Donbas, or what the price of those campaigns will be for Ukrainians and the world. But some kind of forced peace along the lines of the Dayton accords is not in the interests of Ukraine or, frankly, anyone outside of the Kremlin. The Ukrainians are right to be wary of its allies dictating the terms of a future agreement. They can see the challenges Bosnia faces today, nearly 30 years after the war.

The question is: when will the rest of us learn the lessons of Bosnia, too?