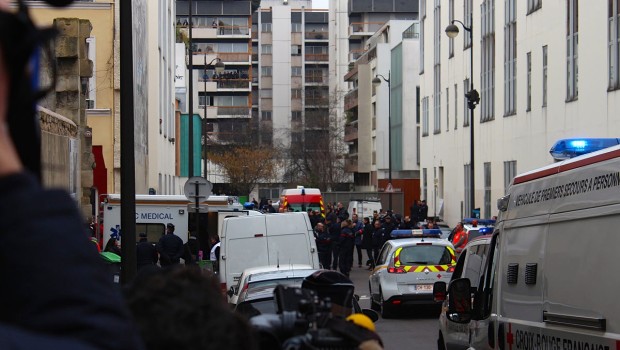 After the Paris massacre, European governments should resist narratives of civilizational conflict and push for a ceasefire in the Syrian war.
By John Feffer | January 12, 2015

The recent attack on the French satirical magazine Charlie Hebdo, which left a dozen editors and cartoonists dead, has renewed concerns that blowback from the latest round of fighting in Syria and Iraq is finally reaching Europe.

In a September 2014 video, the Islamic State (ISIS or IS) called on its militants and sympathizers around the world to kill “disbelievers” in the United States and France in response to air strikes against the radical group. European governments have also feared the return of Europeans radicalized by the war in Syria to fight as “lone wolves” in their countries of origin. A major terrorist attack mounted by such returnees is “pre-programmed,” a top EU official said in September.

“It was culpably naïve to imagine that sparks from the Iraq-Syrian civil war, now in its fourth year, would not spread explosive violence to Western Europe,” warned Patrick Cockburn in The Independent after the Hebdo attack. “With thousands of young Sunni Muslims making the difficult journey to Syria and Iraq to fight for Isis, it has always been probable that some of them would choose to give a demonstration of their religious faith by attacking targets they deem anti-Islamic closer to home.”

Several violent actions have already taken place. In May, French citizen Mehdi Nemmouche, who had fought in Syria with IS, claimed responsibility for an attack on a Jewish museum in Brussels that left four dead. In December, an IS sympathizer took hostages at a café in Sydney before he and two customers died in a shootout with police.

At first glance, the Charlie Hebdo killings seem to fit this pattern. One of the two brothers suspected in the shootings, Cherif Kouachi, tried to leave France in 2005 to fight in Iraq and then stood accused of helping others make the same journey. The assailants carried out the killings this week with what observers have called “military precision.” Several press outlets have suggested that one or both brothers had been to Syria. Other outlets report that the older brother, Said Kouachi, traveled to Yemen in 2011 for training with al-Qaeda in the Arabian Peninsula.

This narrative elevates what might otherwise be a solitary act of terrorism — like the assassination of Theo van Gogh in Amsterdam in 2004 or the massacres in 2011 in Norway by Anders Breivik — into the latest skirmish in a larger war. Such a narrative serves the purposes of IS and al-Qaeda, which both seek a global battlefield to raise their status and boost recruitment. But it also meets the needs of those in the West who seek a rationale for the build-up of the national security state or who want to promote a civilizational conflict against Islam more generally.

Even if the killings can be linked to the ongoing conflict in Syria and Iraq, they would only constitute the second such tragedy to fall into that category, after the Brussels murders last May. Other incidents have been mentioned in the same breath, such as Mohammad Merah’s killing spree in Toulouse and Montauben in 2012. But Merah, reportedly motivated by anti-Semitism and the war in Afghanistan, had not himself fought in the Middle East. The police have also reportedly foiled about a dozen terrorist plots involving returnees from the Syrian conflict.

The far right has already used the Charlie Hebdo killings to bolster its larger Islamophobic agenda. Nigel Farage of the UK Independence Party linked the attacks to a “fifth column” living in the West. French politician Marine Le Pen claimed that only her National Front party was equipped to take on the challenge of “Islamic fundamentalism on our territory.” In the Wall Street Journal, the outspoken Ayaan Hirsi Ali urged the non-Muslim world to stop appeasing radical jihadists, political Islamists, and Muslims more generally (the three categories frequently elide in her analysis).

These tirades miss the point. Muslim organizations, from the Union of Islamic Organizations of France to the Council On American-Islamic Relations, have been vehement in their denunciations. The governments of Iran and Saudi Arabia condemned the attacks. Even the European Muslim organization with strong ties to the Muslim Brotherhood declared the killings a “vile terrorist act,” and Hezbollah leader Sheikh Hassan Nasrallah announced that extremists do more harm to Islam than the cartoons. The Charlie Hebdo assault, in other words, has been an opportunity for Muslim and non-Muslim alike to unite against and further marginalize IS, al-Qaeda, and their followers.

The tragedy should also prompt a rethink of the way Europe is addressing the potential of blowback from the ongoing conflicts in the Middle East. For instance, most governments have adopted an increasingly hardline approach to returnees. Approximately 3,000 Europeans have gone to fight in Syria, but only a few hundred have returned so far (approximately 120 of the 700 French fighters, for instance, and 40 out of 110 Swedes). Most European countries are jailing these former fighters if they betray any links to radical factions in the Middle East.

But jails are the worst place to send these fighters. Those not yet radicalized can come under the sway of persuasive proselytizers. The already convinced, meanwhile, treat prison as a meet-up group to plan future ventures and collaboration.

Denmark, however, has adopted a different approach. It is offering counseling and assistance for returnees to reintegrate into mainstream society. The program is based on the methods used to deal with neo-Nazis, a threat that has largely faded in Denmark. “What we are doing seems to be working,” according to the chief of police in Aarhus, where a number of Syrian fighters have returned.

It is critically important to separate the average fighter, who might have gone to fight in the Middle East for any number of reasons, from hard-core al-Qaeda and IS adherents. Such triage frees up resources for law enforcement to focus on people like Cherif and Said Kouachi.

So far, the number of returnees is manageable on a country-by-country basis. But the longer the conflict continues — and the more resources Europe puts into the fight against the Syrian government of Bashar al-Assad — the larger the potential pool of returnees. Detaining people for going off to fight against Assad while at the same time investing resources into rebels engaged in combating the same enemy makes little sense. European countries should deal with the threat of blowback by trying to reduce the root cause of the problem through diplomatic efforts to end the war or through deescalating the conflict itself.

The Charlie Hebdo killings, whatever their connections to the current wars in the Middle East, were acts of terrorism that should be handled by law enforcement. Blowback from these wars has so far been minimal in Europe. By resisting narratives of civilizational conflict and pushing for a ceasefire in the Syrian war, European governments can do even more to reduce the threat of this blowback.

John Feffer is the editor of LobeLog and the director of Foreign Policy In Focus.