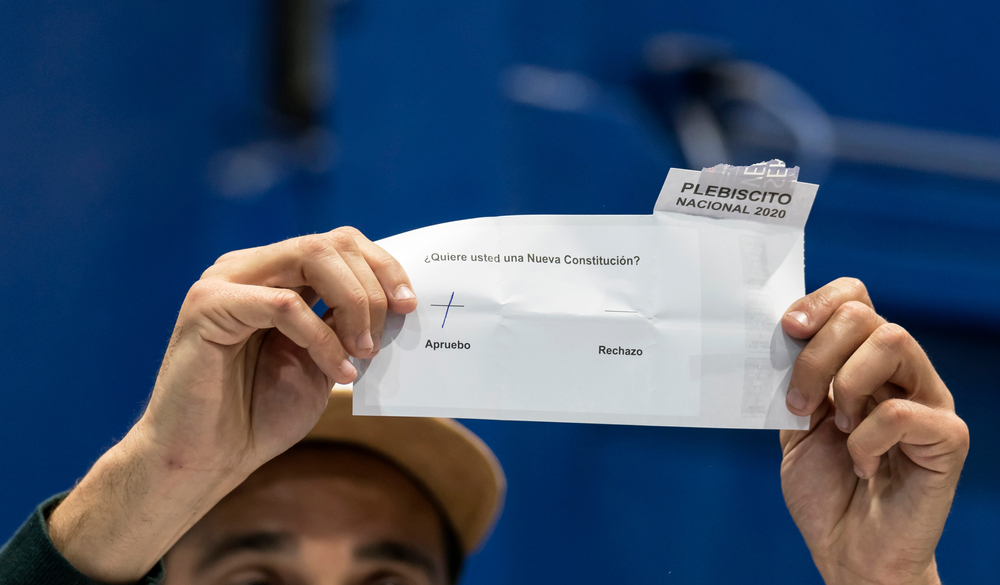 Chile at the Crossroads: Between Reform and Reaction

After finally destroying the last vestiges of Pinochet, is Chile about to elect a right-wing populist to its highest office?
By Kevin Funk | November 29, 2021

In separate votes in October 2020 and May 2021, Chileans went to the polls and delivered three resounding defeats to the country’s political establishment.

First, nearly 80 percent of voters chose to discard the country’s constitution, a neoliberal-oriented product of the violent, U.S.-backed Augusto Pinochet dictatorship that ruled from 1973-1990.

Second, a similar margin decided to exclude existing representatives from the process of drafting a proposed new constitution, instead putting this power in the hands of directly elected citizens.

And third, they elected a left-dominated slate to serve on the Constitutional Convention, which is now headed by Elisa Loncón, an academic and activist from the oppressed Mapuche indigenous group.

Lurking beneath what both domestic and foreign observers had long lauded as Latin America’s most successful country—as the story goes, a solid, stable democracy with functioning institutions and a development trajectory that is much envied in the region—was a moribund and sclerotic political-economic order dominated by leaders allergic to meaningful reform, feudally minded elites, and astounding and ever-rising rates of inequality.

Based on these electoral results, diverse left-aligned forces seemed ascendant, poised to sweep away both traditional right-wing parties and the neoliberal center.

The elections of November 21, which consisted of a first-round presidential vote and the selection of over half of the country’s senators and all of its federal deputies, provided a seemingly ideal opportunity for the left to cement its gains.

Instead, the right struck back.

Most international coverage, quite naturally, has focused on Donald Trump and Jair Bolsonaro acolyte José Antonio Kast coming out on top in the first round of the presidential election with nearly 28 percent of the votes.

Trailing by just over two points was Gabriel Boric, a student-activist-turned-federal deputy who became the surprise left-wing frontrunner after defeating Communist Party member Daniel Jadue, currently the mayor of the Recoleta area of the capital Santiago, in the July primary.

Given the splintering of the electorate—seven candidates contested the presidency, with five earning over 10 percent of the vote—it was unsurprising that no figure amassed the majority needed to avoid a runoff, scheduled for December 19. Further, it was widely predicted that Boric and Kast would be the chosen candidates.

Yet until recently, it was Boric who was widely tipped to be the leading vote-getter. Although all that matters in the end is the second-round result, Kast has claimed to have seized momentum by “winning” the first round.

In turn, the fact that the third- and fourth-place finishers also belong to distinct factions of the right suggests a much more challenging runoff than expected for Boric, around whom all of the country’s anti-authoritarian forces are expected to naturally coalesce in the second round.

Though left-leaning congressional candidates were also expected to triumph, what was achieved—at best—was parity.

In the 50-member Senate, right-wing parties now hold 25 seats, versus 22 for their center-left or left-wing counterparts, along with three independents. Although presidential candidates from both the traditional right and center-left underperformed, the story is different at the congressional level: Kast’s appropriately named “Republican Party” claimed only one seat, while at least 10 were won by the old right. On the left, newish parties also claimed fewer seats than the traditional centrist forces that long ago made peace with neoliberalism, though notably, two Communist Party representatives were also elected for the first time since the 1973 coup against socialist president Salvador Allende.

Chile also elected an entirely new 155-member Chamber of Deputies, with similarly divided results: 74 deputies from either the left or center-left coalitions, an equal number on the right (including 14 from Kast’s “Republicans”), and a smattering of independents, the majority of whom seem to lean to the left. Here, as in the Senate, the defining trait is fragmentation.

For a country that has seen recurring and massive protests for years against widespread inequality and social exclusion, along with the high and escalating costs of education, and the country’s loathed private pension system, the Chilean right’s election-day success seems incongruent.

Yet when conventional parties fall into disrepute, a door is not only opened for progressive movements, but also for far-right forces that are well positioned to both generate and weaponize discontent for reactionary ends.

It’s not surprising that Chilean society includes a significant number of unreformed pinochetistas and other elites who are much more interested in protecting their wealth and privilege than in any semblance of democratic norms.

Nor is the deliberate, and deeply lamentable, incitement by Kast and others of xenophobic and racist sentiment in a country that has seen large numbers of arrivals in recent years from Haiti, Colombia, Venezuela, and elsewhere.

Further aspects of the global right-wing playbook are also on display here.

These include the promise to fight crime with mass incarceration and harsh policing, an ill-defined (and capital-friendly) anti-corruption discourse that taps into real popular discontent over the machinations of Chile’s elite, and fomented moral panics over abortion, the role of women in society, and gay and transgender rights.

Additional factors behind Kast’s surge include a right-wing backlash against rewriting the constitution, and strong backing from landowners in the country’s south—along with the capital Santiago’s wealthy northeastern suburbs, Kast’s electoral heartland—who seek further repression of Mapuche movements that continue to struggle, both peacefully and at times violently, for their rights to ancestral lands.

The same mainstream, “pro-democratic” intellectual elite that abhors Kast more on aesthetic than policy grounds has already decided that the problem with Boric’s campaign is that he ran too far to the left.

Chile is a moderate country, we are told, and Boric will need to move to the center to triumph in the second round and save Chilean democracy (such as it is). Yet this is, to say the least, a rather odd argument, especially given widespread disenchantment with the country’s traditional elites and “moderate” parties.

Nor is the proffering of a left-wing, social-democratic alternative sufficient to ensure success.

That Boric’s platform is, if anything, to the left of Bernie Sanders’, simply did not drive enough turnout in the same working-class sectors who would benefit most directly were it to be implemented. Indeed, over half of Chileans simply did not vote.

This rate does not vary markedly vis-à-vis the recent constitutional elections that produced strong results for the left. Instead, the difference, in part, appears to be that many of the same right-leaning voters who abstained from the last two votes out of apathy or despair turned out in larger numbers this time, while the inverse was true for at least some sectors of the left.

Most of Chile’s upper classes, and those who aspire to join them, have watched years of street protests with great alarm, with fear building daily over the ongoing process of a left-leaning and popularly elected constituent assembly—led, it bears repeating, by an indigenous woman—to draft a new constitution.

With an energized right-wing unifying behind Kast as their protector against the potential of a new political-economic order that threatens longstanding elite privilege, Boric’s ability to command a second-round majority is thus hardly a foregone conclusion, though early polls do show him with a clear advantage.

…and What Could Still Go Right

A large part of the Chilean electorate is angry, and not always in politically coherent ways.

Absent a left-wing movement that is able to channel popular discontent and restore a sense of agency among the country’s disaffected majority, the far-right is likely to prosper, even if victory in the upcoming second-round election proves elusive. It can do so by hoodwinking certain sectors of the working poor to seek facile “solutions” in alliance with the oligarchy. Or it can profit from, as well as actively foment, the nihilistic view that another Chile is not possible—and that any effort to promote progressive reform will inevitably lead to breadlines and turn the country into Venezuela (this, by now, a recurring right-wing propaganda theme throughout the Americas).

In other words, a break is needed not just with neoliberal policy, but with neoliberalism’s cultivation of a highly individualistic social order in which solidarity and collective action appear quaint and quixotic. The hard political work to be done, then, does not revolve around catering to the same (and numerically small) “moderate” factions that have cultivated the swamp out of which Kast arose. Rather, what is needed is a popular campaign for democracy and egalitarianism that offers more credible, specific, and tangible proposals to improve the material lot of the majority of Chileans.

Kevin Funk, Ph.D., is a Fellow in the Committee on Global Thought at Columbia University. He teaches and writes about global political economy and Latin American politics and is the author of the forthcoming book, “Rooted Globalism: Arab–Latin American Business Elites and the Politics of Global Imaginaries.” He can be reached at kevin.funk@gmail.com and followed at @KevinBFunk.