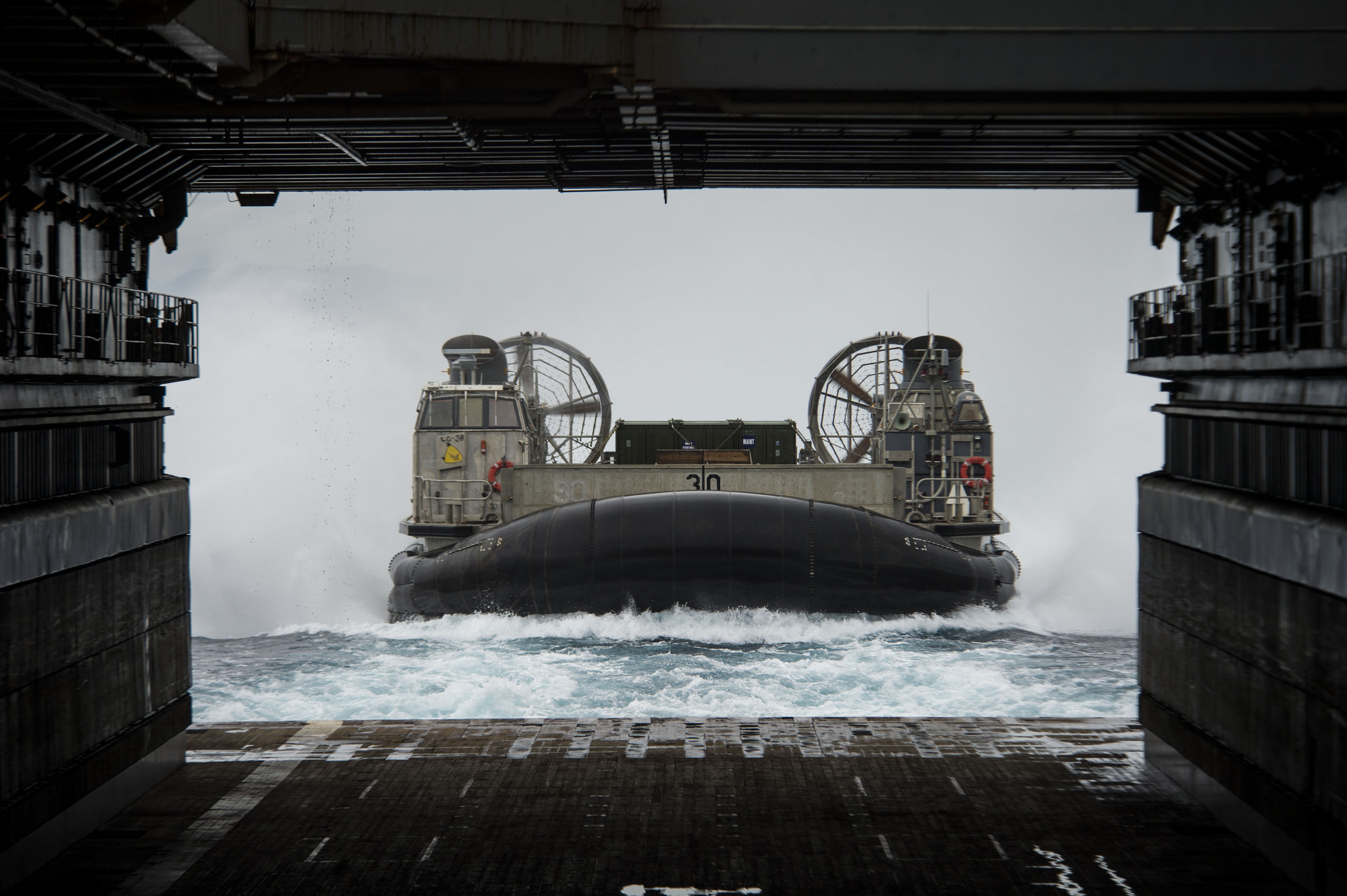 China and the U.S. are Approaching Dangerous Seas

It's not just the chilling rhetoric. In the past five months, warships from both sides have done everything but ram one another.
By Conn Hallinan | August 17, 2016

A combination of recent events, underpinned by long-running historical strains reaching back more than 60 years, has turned the western Pacific into one of the most hazardous spots on the globe. The tension between China and the United States “is one of the most striking and dangerous themes in international politics,” says The Financial Times’ longtime commentator and China hand, Gideon Rachman.

In just the past five months, warships from both countries—including Washington’s closest ally in the region, Japan—have done everything but ram one another. And, as Beijing continues to build bases on scattered islands in the South China Sea, the United States is deploying long-range nuclear capable strategic bombers in Australia and Guam.

At times the rhetoric from both sides is chilling. When Washington sent two aircraft carrier battle groups into the area, Chinese defense ministry spokesman Yang Yujun cautioned the Americans to “be careful.” While one U.S. admiral suggested drawing “the line” at the Spratly Islands close to the Philippines, an editorial in the Chinese Communist Party’s Global Times warned that U.S. actions “raised the risk of physical confrontation with China.” The newspaper went on to warn that “if the United States’ bottom line is that China has to halt its activities, then a U.S.-China war is inevitable in the South China Sea.”

Add to this the appointment of an extreme right-wing nationalist as Japan’s defense minister and the decision to deploy anti-ballistic missile interceptors in South Korea and the term “volatile region” is a major understatement.

A History of Conflict

Some of these tensions go back to the 1951 Treaty of San Francisco that formally ended World War II in Asia. That document, according to Canadian researcher Kimie Hara, was drawn up to be deliberately ambiguous about the ownership of a scatter of islands and reefs in the East and South China seas. That ambiguity set up tensions in the region that Washington could then exploit to keep potential rivals off balance.

The current standoff between China and Japan over the Senkakus/Diaoyu islands—the Japanese use the former name, the Chinese the latter—is a direct outcome of the treaty. Although Washington has no official position on which country owns the tiny uninhabited archipelago, it is committed to defend Japan in case of any military conflict with China. On Aug. 2 the Japanese Defense Ministry accused China of engaging in “dangerous acts that could cause unintended consequences.”

Tokyo’s new defense minister, Tomomi Inada, is a regular visitor to the Yasukuni shrine that honors Japan’s war criminals, and she is a critic of the post-war Tokyo war crimes trials. She has also called for re-examining the 1937 Nanjing massacre that saw Japanese troops murder as many as 300,000 Chinese. Her appointment by Prime Minister Shinzo Abe seems almost calculated to anger Beijing.

Abe is also pushing hard to overturn a part of the Japanese constitution that bars Tokyo from using its military forces for anything but defending itself. Japan has one of the largest and most sophisticated navies in the world.

Over the past several weeks, Chinese Coast Guard vessels and fishing boats have challenged Japan’s territorial claims on the islands, and Chinese and Japanese warplanes have been playing chicken. In one particularly worrisome incident, a Japanese fighter locked its combat radar on a Chinese fighter-bomber.

Behind the bellicose behavior on the China and U.S. sides is underlying insecurity, a dangerous condition when two nuclear-armed powers are at loggerheads.

From Beijing’s perspective, Washington is trying to “contain” China by ringing it with American allies, much as the United States did to the Soviet Union during the Cold War. Given recent moves in the region, it is hard to argue with Beijing’s conclusion.

After a 20-year absence, the U.S. military is back in the Philippines. Washington is deploying anti-missile systems in South Korea and Japan and deepening its military relations with Australia, Vietnam, Indonesia, and India. The Obama administration’s “Asia pivot” has attempted to shift the bulk of U.S. armed forces from the Atlantic and the Middle East to Asia. Washington’s Air Sea Battle strategy—just renamed “Joint Concept for Access and Maneuver in the Global Commons”—envisions neutralizing China’s ability to defend its home waters.

China is in the process of modernizing much of its military, in large part because Beijing was spooked by two American operations. First, the Chinese were stunned by how quickly the U.S. military annihilated the Iraqi army in the first Gulf War, with virtually no casualties on the American side. Then there was having to back down in 1996, when the Clinton administration deployed two aircraft carrier battle groups in the Taiwan Straits during a period of sharp tension between Beijing and Taipei.

In spite of all its upgrades, however, China’s military is a long way from challenging the United States. The Chinese navy has one small aircraft carrier, the United States has 10 enormous ones, plus a nuclear arsenal vastly bigger than Beijing’s modest force. China’s last war was its disastrous 1979 invasion of Vietnam, and the general U.S. view of the Chinese military is that it is a paper dragon.

That thinking is paralleled in Japan, which is worrisome. Japan’s aggressive nationalist government is more likely to initiate something with China than is the United States. For instance, Japan started the crisis over the Senkaku/Diaoyus. First, Tokyo violated an agreement with Beijing by arresting some Chinese fishermen and then unilaterally annexed the islands. The Japanese military has always had an over-inflated opinion of itself and traditionally underestimated Chinese capabilities.

In short, the United States and Japan are not intimidated by China’s New Model Army, nor do they see it as a serious threat. That is dangerous thinking if it leads to the conclusion that China will always back down when a confrontation turns ugly. Belligerence and illusion are perilous companions in the current tense atmosphere.

The scheduled deployment of the U.S. Theater High Altitude Area Defense (THAAD) anti-missile systems has convinced Beijing that the United States is attempting to neutralize China’s nuclear missile force, not an irrational conclusion. Although anti-missile systems are billed as “defensive,” they can just as easily be considered part of the basic U.S. “counterforce” strategy. The latter calls for a first strike on an opponent’s missiles, backstopped by an anti-ballistic missile system that would destroy any enemy missiles the first strike missed.

China is pledged not to use nuclear weapons first. But given the growing ring of U.S. bases and deployment of anti-missile systems, that may change. It is considering moving to a “launch-on-warning” strategy, which would greatly increase the possibility of an accidental nuclear war.

The AirSea Battle strategy calls for conventional missile strikes aimed at knocking out command centers and radar facilities deep in Chinese territory. But given the U.S. “counterforce” strategy, Chinese commanders might assume that those conventional missiles are nuclear-tipped and aimed at decapitating China’s nuclear deterrent.

According to Amitai Etzioni of Washington University, a former senior advisor to President Jimmy Carter, “China is likely to respond to what is effectively a major attack on its mainland with all the military means at its disposal—including its stockpile of nuclear arms.”

A report by the Union of Concerned Scientists concluded that if China moves to “launch on warning,” such a change “would dramatically increase the risk of a nuclear exchange by accident—a dangerous shift that the U.S. could help to avert.”

President Obama is said to be considering adopting a “no-first-use” pledge, but he has come up against stiff opposition from his military and the Republicans. “I would be concerned about such a policy,” says U.S. Air Force Secretary Deborah Lee James. “Having a certain degree of ambiguity is not necessarily a bad thing.”

But given the possibility of accidents—or panic by military commanders—”ambiguity” increases the risk that someone could misinterpret an action. Once a nuclear exchange begins it may be impossible to stop, particularly since the U.S. “counterforce” strategy targets an opponent’s missiles. “Use them, or lose them” is an old saying among nuclear warriors.

In any case, the standard response to an anti-missile system is to build more launchers and warheads, something the world does not need more of.

Although China has legitimate security concerns, the way it has pursued them has won it few friends in the region. Beijing has bullied Vietnam in the Paracel islands, pushed the Philippines around in the Spratly islands, and pretty much alienated everyone in the region except its close allies in North Korea, Laos, and Cambodia. China’s claims—its so-called “nine dash line”—covers most the South China Sea, an area through which some $5 trillion in trade passes each year. It is also an area rich in minerals and fishing resources.

China’s ham-fisted approach has given the United States an opportunity to inject itself into the dispute as a “defender” of small countries with their own claims on reefs, islands, and shoals. The United States has stepped up air and sea patrols in the region, which at times has seen Chinese and American and Japanese warships bow to bow and their warplanes wing tip to wing tip.

The recent decision by the Permanent Court of Arbitration at The Hague that China has no exclusive claim on the South China Sea has temporarily increased tensions, although it has the potential to resolve some of the ongoing disputes without continuing the current saber rattling.

China is a signatory to the 1982 Law of the Sea Treaty, as are other countries bordering the South China Sea (the U.S. Senate refuses to ratify the treaty). China has never tried to interfere with the huge volume of commerce that traverses the region, trade that, in any case, greatly benefits the Chinese. Beijing’s major concern is defending its long coastline.

If the countries in the region would rely on the Law of the Sea to resolve disputes, it would probably work out well for everyone concerned. The Chinese would have to back off from their “nine-dash-line” claims in the South China Sea, but they would likely end up in control of the Senkakus/Diaoyu islands in the East China Sea.

But to cool the current tensions Washington would also have to ratchet down its military buildup in Asia. That will be difficult for the Americans to accept. Since the end of World War II, the U.S. has been the big dog on the block in the western Pacific, but that is coming to an end. According to the International Monetary Fund, China surpassed the U.S. economy in 2014 to become the world’s largest. Of the four largest economies on the globe, three are in Asia: China, Japan, and India.

Simple demographics are shifting the balance of economic and political power from Europe and the United States to Asia. By 2015, more than 66 percent of the world’s population will reside in Asia. In contrast, the United States makes up 5 percent and the European Union 7 percent. By 2050, the world’s “pin code” will be 1125: one billion people in Europe, one billion in the Americas, two billion in Africa, and five billion in Asia. Even the CIA predicts, “The era of American ascendancy in international politics that began in 1945—is fast winding down.”

The U.S. can resist that inevitability, but only by relying on its overwhelming military power and constructing an alliance system reminiscent of the Cold War. That should give pause to all concerned. The world was fortunate to emerge from that dark period without a nuclear war, but relying on luck is a dangerous strategy.