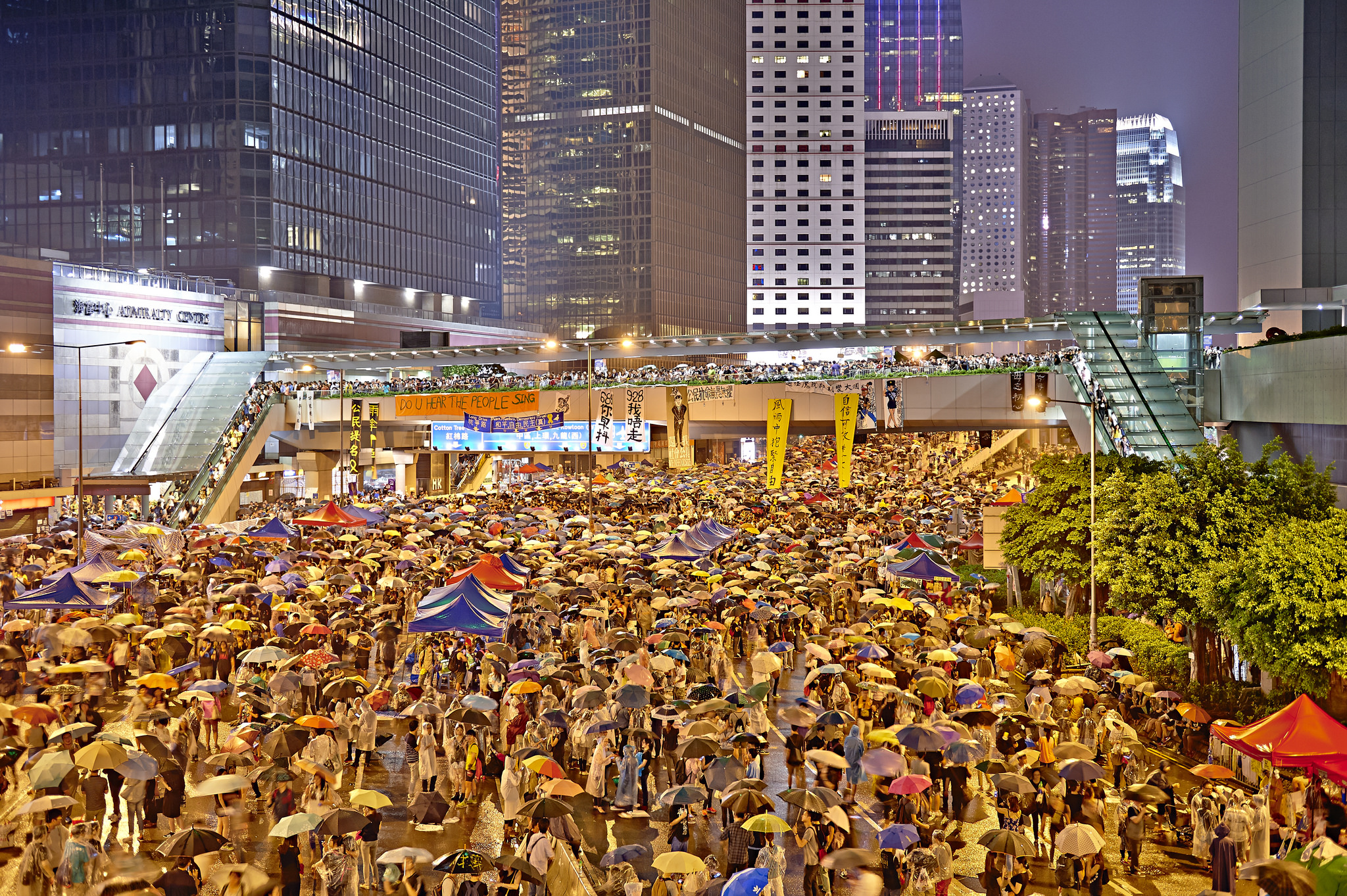 Hong Kong's Occupiers have been peaceful and their demands reasonable, but China's leaders see bogeymen around every corner.
By Kaja Baum | October 10, 2014

Occupy Central—a student-led protest in Hong Kong that swelled rapidly in size, diversity, and visibility—has now matured into a familiar phase of relations with the governing authorities: deadlock.

Hong Kong’s protesters, fueled by a range of issues from housing prices to political interference from Beijing, have united around one clear demand: the right to choose their own leaders.

Armed with little more than umbrellas and face masks, they have been protesting Beijing’s control over the city’s elections in anticipation of the coming chief executive election in 2017. They are especially irked about an unelected, pro-Beijing “nominating committee” that prevents “unpatriotic” candidates from standing for office in Hong Kong. They have demanded the right to choose their own candidates, especially for the post of chief executive.

After over a week of protests, the Hong Kong government, under the influence of Beijing, agreed to preliminary talks with the Hong Kong Federation of Students, a group that represents the protesters. But just days after agreeing to the talks, the government canceled them.

The plug was pulled after an investigation by Hong Kong’s Justice Department revealed a payout of $6.4 million that was made to Chief Executive Leung Chun-ying by UGL Ltd, Australian engineering company, after he was elected. The payment was supposedly for the acquisition of DTZ Holdings, a property consultancy and Leung’s former employer.

The cancellation of the talks came just a few days after Leung, whose resignation many protestors have demanded, claimed that the Hong Kong government was “sincere in having dialogue on constitutional development.” Explaining the about-face, Hong Kong Chief Secretary Carrie Lam gave the excuse that the “students’ call for an expansion of an uncooperative movement has shaken the trust of the basis of our talks, and it will be impossible to have a constructive dialogue.”

The reality is that the students’ core political demands were unlikely to make the agenda anyway. Even if Beijing had been willing to negotiate, the possibility of a fully democratic Hong Kong was no more likely than it was before. Hong Kong officials had said that changes to election laws were possible for restructuring the nominating committee, but nothing more. “Sooner or later, it’s going to sink in with them that what they’re asking for, they’re just not going to get,” said one anonymous official.

Beijing’s willingness to allow negotiations came in stark contrast to the hard line it has propagated in state media outlets, which have painted Occupy Central as a hostile movement and accused the peaceful protesters of “illegal activity.”Heavily censored news reports and editorials have played up the inconvenience the protests have caused the general population and the threat they may pose to Hong Kong’s economic stability. Following a meeting with U.S. Secretary of State John Kerry, Chinese Foreign Minister Wang Li reinforced Beijing’s refusal to compromise. “I believe for any country, for any society, no one will allow those illegal acts that violate public order,” he said.

Michael Forsythe and Alan Wong of the New York Times had postulated that the talks may have been used to “provide a useful delay for the government, helping to sap the energy of the protests without promising a meaningful compromise.” It is possible that they were canceled to prevent even that victory from coming to fruition, as the ranks of protestors have slowly dwindled.

For China, the outcome of these protests will have consequences that reverberate far beyond the borders of Hong Kong itself. As Vox’s Max Fisher observes, the Chinese government views Occupy Central as “a potentially existential threat to the entire Chinese system, which is perceived as so weak and embattled that leaders believe even peaceful protests like this could bring everything crashing down.”

Contrary to its reputation in much of the world as a rising power and economic powerhouse, China is facing numerous internal challenges that have greatly diminished its own self confidence.

Following decades of tremendous economic development, China’s export-based economy now faces a looming economic stagnation crisis that will require major policy changes to adjust. And the breakneck pace of development in the country has fomented all kinds of social unrest. According to Foreign Policy In Focus columnist Walden Bello, the country has seen a wave of new protests and strikes against inequality, corruption, environmental degradation, labor exploitation, and land grabs.

China’s restive minority groups, as well as nervous countries on its periphery, are watching the events closely for an opportunity to highlight what they see as Beijing’s unfair and even brutal policies. According to Foreign Policy magazine, China’s handling of Hong Kong is seen as a “template for how it might approach Taiwan,” which currently functions as an independent state that China claims as rightfully belonging to the mainland. In western China, Tibetans and Uighurs are also hoping that these events draw more international attention to how China treats its ethnic minorities.

From their point of view, President Xi Jinping and China’s leaders are beating back the wolves at every door and in their own den. While the rest of the world may view China as a rising and sometimes intimidating power, the Chinese leadership sees bogeymen around every corner, threatening its legitimacy.

The likelihood that China’s negotiations with Hong Kong’s citizens would have led to any substantial victories on behalf of the voters was small. Although some form of negotiations may eventually resume, there is simply too much at stake in the eyes of China’s leadership to offer major concessions. As Occupy Central’s holdouts return to their studies and jobs, tired Hong Kong citizens may be losing their window for reform, with convictions fizzling out even promises are broken.

There is small comfort to be taken, if only feigned, in China’s temporary willingness to talk with protestors. It lands far removed from the grisly conclusion of the highly publicized protests in 1989 at Tiananmen Square.

Will Hong Kong’s protestors be able to resurrect the promise of negotiations in the future? The longer the issue is drawn out, the less likely it becomes that the movement will have the leverage it needs to push the government—at least not without maintaining a vibrant presence in the streets.

The election for Hong Kong’s next chief executive, however, does not take place until 2017. Even if the democratic aspirations of Hong Kong’s citizens are not addressed this time around, the opportunity is not entirely lost. “All gates were closed before,” said federation spokeswoman Yvonne Leung. “We have now won some space for dialogue, and we’ve seen a growth in our civil society. The people used to be unaware of their own power, but now they know.”