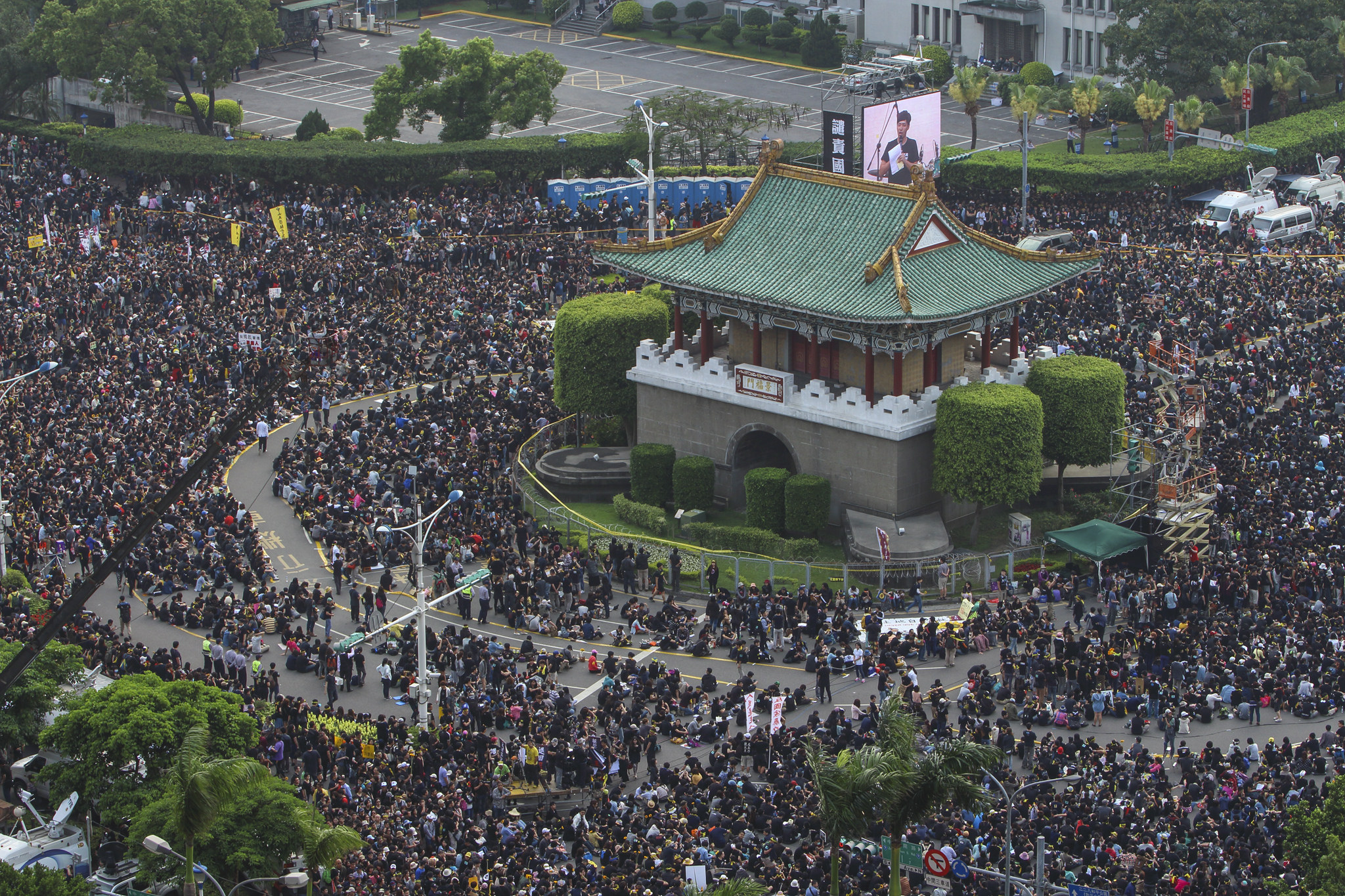 Young activists in Hong Kong and Taiwan are increasingly combining their efforts to protect local autonomy and democracy.
By Glenn Smith | July 16, 2014

Just off the shores of mainland China, an Occupy-style movement is taking shape in Hong Kong.

Shortly before the July 1 kickoff of Occupy Central in Hong Kong, three hopeful attendees from Taiwan learned that they were unwelcome. Sunflower movement leaders Lin Fei-fan and Chen Wei-ting, both student activists, and Huang Kuo-chang, an associate researcher at Academia Sinica, discovered that Hong Kong authorities had rejected their applications for visas.

Lin, in a Facebook post, said that the three of them—dubbed The Trio in Taiwan for their persistent visibility at the storming of the Legislative Yuan last March—were hoping to return the support that Hong Kong’s citizenry had shown toward their political action in Taiwan.

The decision by Hong Kong immigration authorities was hardly unexpected, however. The People’s Republic of China (PRC) has a long and determined history of preventing exiled dissidents or overseas Chinese democracy activists from stepping foot on its soil.  What rankles China most is the formation of coalitions of activist leaders within its Special Administrative Districts (SAR) of Hong Kong and Macau, and in what it views as its province-in-waiting, Taiwan.

One organization that has already felt China’s ire is the New School for Democracy (NSFD) formed by Wang Dan—a former student leader of the 1989 Tiananmen Square pro-democracy movement and currently a professor at Taiwan’s National Tsing Hua University—and other Chinese pro-democracy advocates in Taiwan, Hong Kong, and the West. Founded in 2011, the NSFD’s launch date—October 1, Communist China’s national holiday—was intentionally provocative. “Today is not a day to celebrate the founding of the PRC, but a national mourning, because the Chinese Communist Party regime has done more harm than good to the country,” said Wu Dan at a ceremony in Taipei.

NSFD member Tseng Chien-yuan, an associate professor at Taiwan’s Chung Hua University, was turned back on May 30 at the airport in Hong Kong, where he was to participate in a seminar marking the 25th anniversary of the Tiananmen massacre. In a statement, the NSFD responded: “Beijing has long been violating international law by restricting blacklisted democracy advocates’ visits to Hong Kong, but Tseng might be the first Taiwanese citizen, with legal and effective traveling documents, to be denied entry.”

Now comes the blacklisting of Taiwan’s Sunflower Trio—Lin, Chen, and Huang—a signal that Beijing is casting its spotlight as well on the new generation of political activists along China’s increasingly restive and turbulent borders. Twenty-something activists—loosely labeled the “Post80s” in Hong Kong and the “Wild Strawberries” in Taiwan—have formed the backbone of major political protests in Hong Kong and Taiwan in recent years.

Two observers of this trend are Edmund Cheng, a lecturer at the Open University of Hong Kong (OUHK), and Mingsho Ho, a professor at National Taiwan University (NTU). Cheng reports a sharp increase in Post80s activism beginning in 2006, while Ho pegs the birth of the Wild Strawberries to 2008.

Hong Kong’s population was often described as politically apathetic under British colonial rule. But following the transfer of sovereignty to China on July 1, 1997, Hong Kong has become a city of protests. In a forthcoming paper, Cheng supplies the official police tally—51,946 approved applications for protests in the 15 years between the handover and September 2012. This tally, Cheng cautions, includes everything but the kitchen sink—workers protesting at a single place of business, for example, or AstroTurf efforts by established political parties, as well as the sundry outpourings of fleeting discontent that fade in a day. But in 2006, a new spirit of dissent emerged, and it coincides with the coming of age of the Post80s generation.

“Compared with past rallies that required months of preparation, including the coordinating of NGOs, the establishing of an agenda, and the organizing of press meetings, post-2006 contention has emerged spontaneously,” explained Cheng in an email interview.

In his research, Chen focused on what he calls “salient” events, defined as protests involving at least 500 participants, lasting more than a week, comprising a range of NGOs, earning headlines in three newspapers, and warranting response from the highest authorities or resulting in policy changes. He lists six such events since 2006, which generally entailed protests against infrastructure and development projects, a national educational curriculum, and television licenses.

“Hong Kong’s activism emerged in 2006 through heritage and hence identity struggles,” said Cheng. “In part, the tactic was inspired by the South Korean farmers’ direct actions during the WTO’s ministerial conference in Hong Kong In 2005. It was then magnified by the undemocratic [SAR] government’s incapacity to respond to their post-modern appeals. Of course, what drove these young people to the streets in the first place was the decline in social mobility they face in Hong Kong.”

Summarizing these “salient” protests in Hong Kong, Cheng said: “The ‘undemocratic’ [SAR] administration is obviously the target [of these protests], but the origin of contention is always Beijing.” Expanding his field of observation to include Taiwan, he added, “China’s rise has created anxiety in the two Asian Tigers; its economic and political encroachments have further prompted civil society in Taiwan and Hong Kong to defend their areas’ ways of life, identity, and political systems.”

Taiwan has a much different history of resistance than Hong Kong. During the past several centuries, Taiwan was a frontier society that battled the Spanish, the Dutch, the Ching Dynasty throne, interloping European traders, and the Japanese. After being expelled from the mainland by Mao’s Communists, Chiang Kai-shek’s Kuomingtang (KMT) party arrived in 1949 and declared martial law. Two decades of White Terror ensued.

NTU’s Mingsho Ho has written extensively about social movements in Taiwan, including a recent paper summarizing their history from 1980 to the near present. Modern Taiwan saw a burst of student activism, dubbed the Wild Lily Movement, after the lifting of martial law in 1987 that faded away in the early 1990s.

“In November 2008, the student movement made an unexpected comeback to protest the police brutality that had occurred when the Ma government received China’s emissary,” wrote Ho in his paper. “Self-consciously following the precedent of 18 years [previous], the student activists called their movement Wild Strawberry.”

The Chinese emissary was Chun Yunlin, chairman of the PRC’s private foundation, Association for Relations Across the Taiwan Strait (ARATS), formed as a governmental proxy for meetings with its Taiwan counterpart, the Straits Exchange Foundation (SEF). Chun had come to Taipei for five days of talks with SEF’s chairman Chiang Pin-kung, the highest-level meeting between the KMT and the Chinese Communist Party in six decades. Earlier that year, in March, the KMT’s Ma Ying-jeou had won the presidency, and his party had a large majority in the legislature. During his campaign, Ma pledged to improve and expand political ties with China.

“There had been student political action clubs in the 1980s, but they died out in the 1990s, and now they were back again,” said Ho in an interview at his office on the NTU campus. Ho described student activism in Taiwan. There is no single student “movement” per se. Instead, across campus one finds scores of single-issue political action clubs. Many have as few as 10 members, and a particular student might be active in as many as a dozen of them.

“Now the students have experience,” said Ho. “They know how to work with NGOs, and how to recruit new members. They can handle the pressure. Many of their issues are local—concerns that only locals care about. But sometimes these small cases catch the attention of outside groups and gain widespread attention and become national causes.”

The Sunflower student movement, which put student activists Lin and Chen in the national spotlight, is a prime example.

China is notorious for censoring news and blocking web media. Beijing doesn’t generally consider stories touting the success of Hong Kong’s Occupy Central or Taiwan’s Sunflower movement to be fit for domestic consumption. Even in the SAR districts of Hong Kong and Macau, despite their guaranteed press freedoms, China exerts some influence. Taiwan’s media, however, is completely beyond its control.

But still China tries to quarantine activists in Hong Kong, Macau, and Taiwan to curtail cross-pollination. Yet prohibiting Lin, Chen, and Huang from entering Hong Kong was as spiteful as it was pointless. Asked if students in Taiwan and Hong Kong exchange ideas, Ho said that Hong Kong students are well informed of what is going on in Taiwan.

“I was in Hong Kong in March and visited three campuses,” said Ho. “On March 24, I was at Hong Kong Chinese University—this happened to be the day after the Sunflower protesters were forcibly expelled from the Executive Yuan—and more than 100 students showed up for my talk. There were banners everywhere. My hosts were quite surprised.” Some of the activists Ho met in Hong Kong later flew to Taipei to participate in the Sunflower movement.

On Taiwan campuses, some join the political action clubs that Ho mentioned, and some go home as radicals. A notable example is former NTU student Su Jiahao, who after leaving Taiwan became a leader of Macao [sic] Conscience, and helped launch Macau’s May 25th rally against the “Bill of Greed and Privilege” attended by 20,000 protesters.

But this campus-to-campus conduit is mostly one-way. Studying abroad is a dream for many Taiwanese students, and mastering a foreign language is part of it. Of the 33,881 students who went abroad in 2012, nearly all chose a country with a non-Chinese language, the foremost being English and the runner up Japanese.

Behind all this activism in Hong Kong, Macau, and Taiwan lies the specter of Tiananmen Square and the tragic end to the protests on June 4, 1989. “I won’t go for a Tiananmen comparison since the contexts are so different,” said NTU’s Ho. “Social activism always comes and goes. What is happening in Taiwan and Hong Kong is that activism has picked up at roughly the same time, as both societies are experiencing the same negative impact from China.”

OUHK’s Cheng doesn’t like the Tiananmen Square comparison either. “China and Hong Kong’s government is worried about student activism,” he said. “Youth is the new player who they don’t understand and who would never resort to backdoor negotiation. The new activism, in general, looks vibrant and sincere to the concerned public. I believe it will continue to mobilize.”

Glenn Smith is a journalist who’s been based in Taipei for 30 years. He has contributed to more than 100 publications, including Foreign Policy In Focus.