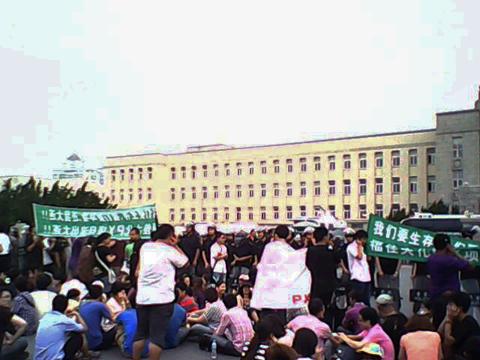 Micro-blogging is increasing the pressure on the Chinese government to eradicate “Re-education Through Labor” camps.
By Emma Lo | August 1, 2013

“The 2,000 something yuan state compensation will be of help to my poor family but it’s really not a lot of money. The main reason for my appeal is to prove my innocence,” Tang Hui, mother of a rape victim, told the South China Morning Post. On July 15, Hunan Provincial People’s High Court ruled for Tang Hui to receive compensation for having spent nine days of unjustified detention in a labor camp. The ruling holds important and promising implications, for both reform of the labor camp system and for the power of the Chinese public.

In October 2006, Tang Hui’s daughter was kidnapped, raped, and forced into prostitution for two months before she was rescued and returned to her home. Of the seven kidnappers tried in June 2012 at the Hunan Provincial Higher People’s Court, two [P1] were sentenced to death, while four received life sentences and the last was sentenced to serve in prison for 15 years.

Finding the milder sentences unacceptable in a country that executes more prisoners than any other, Tang protested at government buildings, demanding the death penalty for all involved. Tang’s demonstrations against the court’s ruling, including sleeping in a courtroom for 15 nights, prompted authorities to place Tang in the Yongzhou “re-education through labor” (RTL) center[P2]  for 18 months for “disturbing social order.”

The public responded to Tang’s sentence with an enormous online backlash. Chinese microblogging sites such as Sina Weibo exploded with millions of tweets in reaction to Tang’s sentence, pressuring the Yongzhou RTL center to release Tang after only nine days. “This really would have been unimaginable without the Internet,” wrote a Chinese lawyer, Sun Yueli.

The continued public support was evidenced in the turnout at her appeal, which attracted “more than 200 people, including 50 journalists,” according to the court’s Weibo posts and photos of the courtroom. With support online, from court spectators, and even in several newspaper editorials, Tang’s fight has become more than a personal defense of innocence as people adopt Tang’s story to combat the labor camp system.

Since the 1950s, the Chinese Communist Party has made use of RTL camps, or laojiao, as a form of punishment that works outside all codes and laws: it grants police the power to detain suspects for up to four years without judicial review. According to the Chinese Ministry of Justice, roughly 3.5 million people have been punished through the RTL system since its founding.

In 2012, the Chinese government made slight reforms to the re-education system in Nanjing, Lanzhou, Zhengzhou, and Jinan by instating pilot replacement systems called “education and correction of violations” centers. Additionally, government officials have been promising larger changes. “The relevant authorities are working intensively on the plan to reform the re-education through labour system,” China’s premier Li Keqiang said in March. “And the plan might be unveiled before the end of the year.”

Many Chinese are hopeful that Tang’s victory and the movement it has created will expedite the reform process. “Since last August, this case has shown its influence on prompting reform of the [labor camp] system,” said Tang’s lawyer, Xu Liping. “And I hope this result will speed up considerations among national leaders to repeal it.”

Tang’s case and others like it are helping to establish a pattern that ultimately leads to government accountability. While progress toward reform has been sluggish, the peoples’ voice can and will serve as a catalyst for change in a display of the new power that the Chinese wield in the Internet age. As its citizens make louder demands for the eradication of the labor camp system, the Chinese government will feel heightened pressure to respond with legislation.

Emma Lo is an intern at Foreign Policy in Focus.