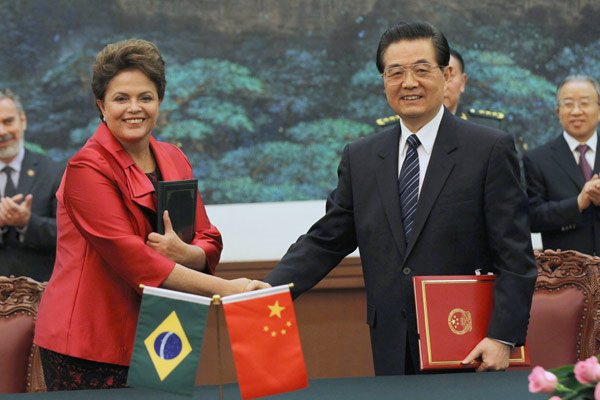 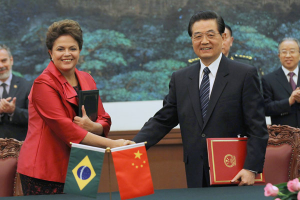 In the wake of Obama’s recent tour of Latin America, media reports and commentators claimed that China has been economically outmuscling the United States in the region. The reality, however, is that Beijing’s economic presence has not come at the expense of the United States. Although Washington still maintains an overwhelming edge, its influence is decreasing. This decline will be exacerbated by Obama’s focus on boosting U.S. exports to the region rather than importing more of Latin America’s manufactured goods.

True, China has become a key trading partner in Latin America during the last decade. Sino-Latin American trade has risen from $12 billion in 2000 to more than $140 billion today (though the region’s trade deficit also rose from $950 million to $32 billion in 2009).

Nevertheless, China’s relations with Latin America need qualifying. In 2008, 90 percent of the region’s exports to China originated in four South American countries (Argentina, Brazil, Chile, and Peru). The disparity of trade with China explains to some extent the different growth patterns within subregions in Latin America. In 2010, Central America’s economy grew by 4.9 percent while South America’s expanded by 6.6 percent.

The current trade dynamic between China and South America is becoming a relationship of economic dependence that benefits Beijing. China is the largest export market for Brazil and Chile, and comes in second with Argentina, Colombia, Peru, and Venezuela. Most exports consist of commodities such as iron ore, copper, copper ores and concentrates, and soya derivates. In turn, up to 92 percent of Latin America’s manufactured exports compete directly or indirectly with China’s products, which ultimately results in deindustrialization for Latin America. In 2010, Brazil lost approximately 70,000 jobs in the manufacturing sector and $10 billion in income.

However, Latin America is in no position to reject Chinese “aid.” Such aid boils down to financing for a wide range of projects that comes with strings attached, such as a guarantee of access to certain natural resources, or the condition that Chinese companies undertake the projects. In 2009, China lent Brazil $10 billion in exchange for future oil shipments. In 2010, China advanced $20 billion to Venezuela to pump oil from the Orinoco Belt block. Last year China lent $10 billion to Argentina to renovate its aging railway system. Smaller loans have gone to other countries.

In order not to completely undermine the Washington-designed and controlled Inter-American Development Bank (IDB), the largest source of development financing for the region, China has become a donor member. In 2009, when it joined the bank at the height of the financial crisis, China committed $350 million. In late March 2011, the IDB and the Export-Import Bank of China signed a letter of intent to establish an infrastructure investment mechanism to finance public and private sector projects in Latin America. The catch, however, is the use of the yuan as one of the currencies to undertake these investments.

Raising the yuan’s profile in international trade enhances China’s leverage over South America. Among the BRIC nations Brazil and Russia supported China’s call in 2009 to replace the dollar as a reserve currency with the International Monetary Fund’s unit of account SDR (an international reserve asset created by the IMF in 1969 that has the potential to act as a super-sovereign reserve currency). The reality, however, is that the initiative would take years and is complicated by the inconvertibility of the yuan. In the meantime, China is promoting its currency in bilateral trade. In 2009, Argentina signed a 70 billion yuan ($10 billion) currency-swap agreement. Brazil tentatively agreed in 2009 to trade with China in renminbi and reals. And this year, Peru became the first Latin American country where businesspeople can open yuan-denominated bank accounts to settle trade with China.

Despite the strides that China has made in the region, countries remain apprehensive. The WikiLeaks diplomatic cables highlighted the level of suspicion. One Colombian trade representative based in Beijing noted that his country would not be “walked all over” by China “like Africa.” A Mexican official stated that “we don’t want to be China’s next Africa.” And the Brazilian consul general in Shanghai argued that “China’s strategy is very clear: it is doing everything possible to control the supply of commodities.”

China’s negotiation tactics in the region corroborate such apprehension. In 2010, after Argentina imposed anti-dumping measures on Chinese footwear and textile products when the government detected unfair competition, Beijing halted imports of soya oil, Argentina’s main export, in retaliation. Despite Argentine concessions, Beijing has not resumed imports. In another example, last year, Ecuador suspended negotiations with China’s Eximbank for a $1.7 billion loan after Quito found unacceptable a demand to provide the Central Bank’s assets as collateral. Ecuador’s president stated that “negotiating with China is worse than the IMF.” The loan was eventually signed, but details are unclear.

Beijing’s actions to secure land for agriculture are also raising concerns in the region. China has 20 percent of the world’s population but only 11 percent of its territory is suitable for agriculture. China’s land acquisitions have been more prominent in Africa, but in recent years South America has received attention as well. In 2010, a Chinese firm’s lease of 320,000 hectares of Argentine land created considerable opposition after the signed deal became public. The implications for local food sovereignty are at the forefront of worries. As a result in February 2011, Cristina Kirchner, Argentina’s president, announced plans to restrict the acquisition of land by foreigners. In Brazil, lawmakers are also considering amending the law to make it harder for foreigners to acquire land.

South America’s trade with the United States, meanwhile, is more balanced. The approximately $200 billion in annual bilateral trade between the United States and South America relies more on agricultural and manufactured products, rather than on the raw materials that China has extracted from the region. Moreover, the United States remains the single most important source of aid to the region. Throughout the last decade most countries have received economic aid for various health, educational, and environmental programs, but primarily for security initiatives. And even though the amount varies greatly among countries, this economic aid is fundamental for some government programs. Proposed cuts in the 2012 foreign aid budget could reduce such influence. The $1.98 billion budget is the lowest amount since 2007.

The dynamics of Washington’s engagement with Latin America, in spite of historic grievances, renders the United States a more popular power than China. According to a 2010 Gallup poll, 50 percent of Latin Americans approve the job performance of the U.S. leadership. In contrast, 28 percent of the region’s respondents approve of China’s leadership. The leadership of both countries rates a 20 percent of disapproval. There are no significant differences in response between Central and South America.

More telling, however, are the results of a similar Gallup poll carried out in 2006. Five years ago, U.S. approval ratings stood at 30 percent while disapproval reached 45 percent. Regarding China, although 28 percent approved of its leadership, 22 disapproved. Comparing the 2006 with the 2010 results, it is clear that Washington has gained an advantage in soft power over Beijing, especially given China’s repression of human rights activists.

Nevertheless, the self-serving U.S. strategy in the region may be counterproductive. Secretary of State Hillary Clinton articulated Washington’s vision: “Enhancing our competitiveness, accelerating innovation, achieving energy security, and expanding our exports — all of these require robust engagement with Latin America.” Focusing on only increasing U.S. exports to the region while decreasing aid may push countries to fully embrace China’s type of economic engagement. Washington would be wiser to encourage imports of manufactured goods from Latin America that compete directly with Chinese goods and create good jobs in the region.