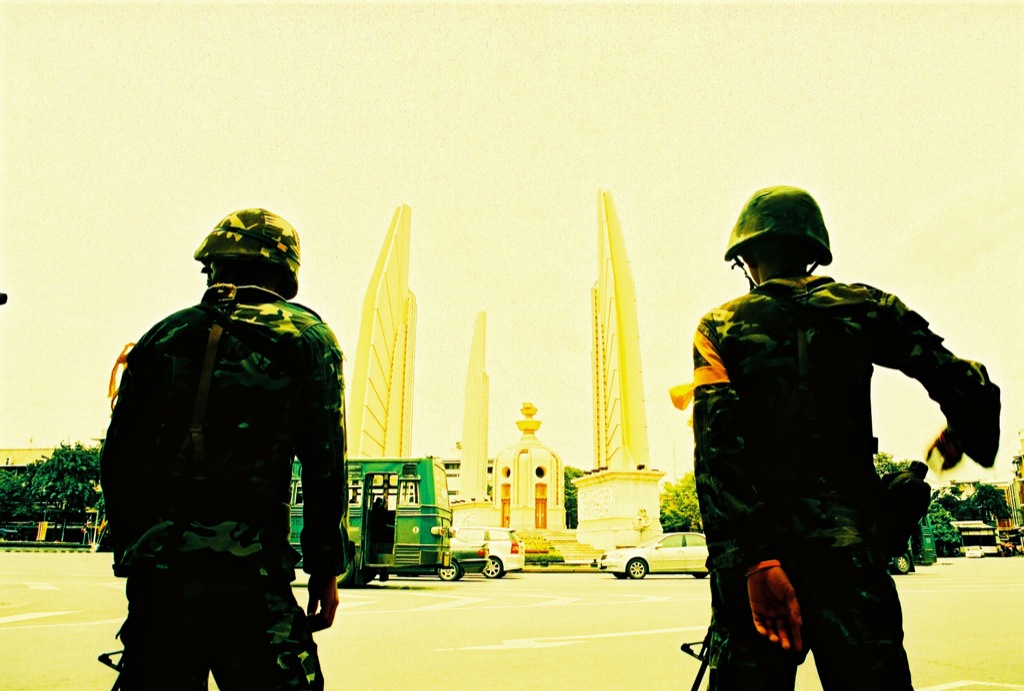 Thailand's military coup is a victory for the country's elites and middle classes. But the country's rural majority is unlikely to stand aside while the elites dictate a new constitution. (Photo: Pittaya Sroilong / Flickr)

Outnumbered by the country's rural voters, Thailand's once vibrantly democratic urban middle class has embraced an elitist, antidemocratic agenda.
By Walden Bello | May 27, 2014

The Thai military portrayed its seizure of power as an effort to impose order after two rounds of talks between the country’s rival factions failed to produce a compromise that would provide Thailand with a functioning government.

The military’s narrative produced few takers. Indeed, many analysts saw the military’s move as a coup de grace to Thailand’s elected government, following what they saw as the judicial coup of May 7.

It is indeed difficult not to see the putsch as the final step in a script deftly managed by the conservative “royalist” establishment to thwart the right to govern of a populist political bloc that has won every election since 2001. Utilizing anti-corruption discourse to inflame the middle class into civil protest, the key forces in the anti-government coalition have, from the start, aimed to create the kind of instability that would provoke the military to step in and provide the muscle for a new political order.

Using what analyst Marc Saxer calls “middle class rage” as the battering ram, these elite elements forced the resignation of the Yingluck government in December; disrupted elections in February, thus providing the justification for the conservative Constitutional Court to nullify them; and instigated that same court’s decision to oust Yingluck as caretaker prime minister May 7 on flimsy charges of “abuse of power.” Civil protest was orchestrated with judicial initiatives to pave the way for a military takeover.

The military says that it will set up a “reform council” and a “national assembly” that will lay the institutional basis of a new government. This plan sounds very much like the plan announced in late November by the protest leader Suthep Thaugsuban, which would place the country for a year under an unelected, unaccountable reform panel.

The military’s move has largely elicited the approval of Suthep’s base of middle-class supporters. Indeed, it has been middle-class support that has provided cover for the calculated moves of the political elites. Many of those that provided the backbone of the street protests now anticipate the drafting of an elitist new order that will institutionalize political inequality in favor of Bangkok and the country’s urban middle class.

The Thai Middle Class: From Paragons to Enemies of Democracy

The sociologist Seymour Martin Lipset once celebrated the middle class as paragons of democracy. But in recent years, middle-class Thais have transmogrified into supporters of an elitist, frankly antidemocratic agenda. Today’s middle class is no longer the pro-democracy middle class that overthrew the dictatorship of General Suchinda Krapayoon in 1992. What happened?

Worth quoting in full is an insightful analysis of this transformation provided by Marc Saxer:

The Bangkok middle class called for democratization and specifically the liberalization of the state with the political rights to protect themselves from the abuse of power by the elites. However, once democracy was institutionalized, they found themselves to be the structural minority. Mobilized by clever political entrepreneurs, it was now the periphery who handily won every election. Ignorant of the rise of a rural middle class demanding full participation in social and political life, the middle class in the center interpreted demands for equal rights and public goods as ‘the poor getting greedy’… [M]ajority rule was equated with unsustainable welfare expenses, which would eventually lead to bankruptcy.

From the perspective of the middle class, Saxer continues, majority rule

overlooks the political basis of the social contract: a social compromise between all stakeholders. Never has any social contract been signed which obligates the middle class to foot the tax bill, in exchange for quality public services, political stability and social peace. This is why middle classes feel like they are “being robbed” by corrupt politicians, who use their tax revenues to “buy votes” from the “greedy poor.” Or, in a more subtle language, the “uneducated rural masses are easy prey for politicians who promise them everything in an effort to get a hold of power.”

Thus, Saxer concludes, from the viewpoint of the urban middle class,

policies delivering to local constituencies are nothing but “populism,” or another form of “vote buying” by power hungry politicians. The Thai Constitutional Court, in a seminal ruling, thus equated the very principle of elections with corruption. Consequently, time and again, the “yellow” alliance of feudal elites along with the Bangkok middle class called for the disenfranchisement of the “uneducated poor,” or even more bluntly the suspension of electoral democracy.

However, the elite-middle class alliance is deceiving itself if it thinks the adoption of a constitution institutionalizing minority rule will be possible. For Thailand is no longer the Thailand of 20 years ago, where political conflicts were still largely conflicts among elites, with the vast lower classes being either onlookers or passive followers of warring elite factions.

What is now the driving force of Thai politics is class conflict with Thai characteristics, to borrow from Mao. The central figure that has transformed the Thai political landscape is the exiled Thaksin Shinawatra, a charismatic, if corrupt, billionaire who managed through a combination of populism, patronage, and the skillful deployment of cash to create a massive electoral majority. While for Thaksin the aim of this coalition might be the cornering or monopolization of elite power, for the social sectors he has mobilized, the goal is the redistribution of wealth and power from the elites to the masses and—equally important—extracting respect for people that had been scorned as “country bumpkins” or “buffaloes.” However much Thaksin’s “Redshirt” movement may be derided as a coalition between corrupt politicians and the “greedy poor,” it has become the vehicle for the acquisition of full citizenship rights by Thailand’s marginalized classes.

The elite-middle class alliance is dreaming if it thinks that the Redshirts will stand aside and allow them to dictate the terms of surrender, much less institutionalize these in a new constitution. But neither do the Redshirts at present possess the necessary coercive power to alter the political balance in the short and medium term. It is now their turn to wage civil resistance.

Since the coup, about 150 people have been reported detained—including Pravit Rojanaphruk, a prominent reporter for Thailand’s Nation newspaper known for his criticism of the anti-government protest movement that precipitated the military’s intervention.

What now seems likely is that, with violent and non-violent civil protest by the Redshirts, Thailand will experience a prolonged and bitter descent into virtual civil war, with the Pheu Thai regional strongholds—the North, Northeast, and parts of the central region of the country—becoming increasingly ungovernable from imperial Bangkok. It is a tragic denouement to which an anti-democratic opposition disdaining all political compromise has plunged this once promising Southeast Asian nation.

Walden Bello, a member of the House of Representatives of the Philippines, was the principal author of A Siamese Tragedy: Development and Disintegration in Modern Thailand (London: Zed Press, 1998).