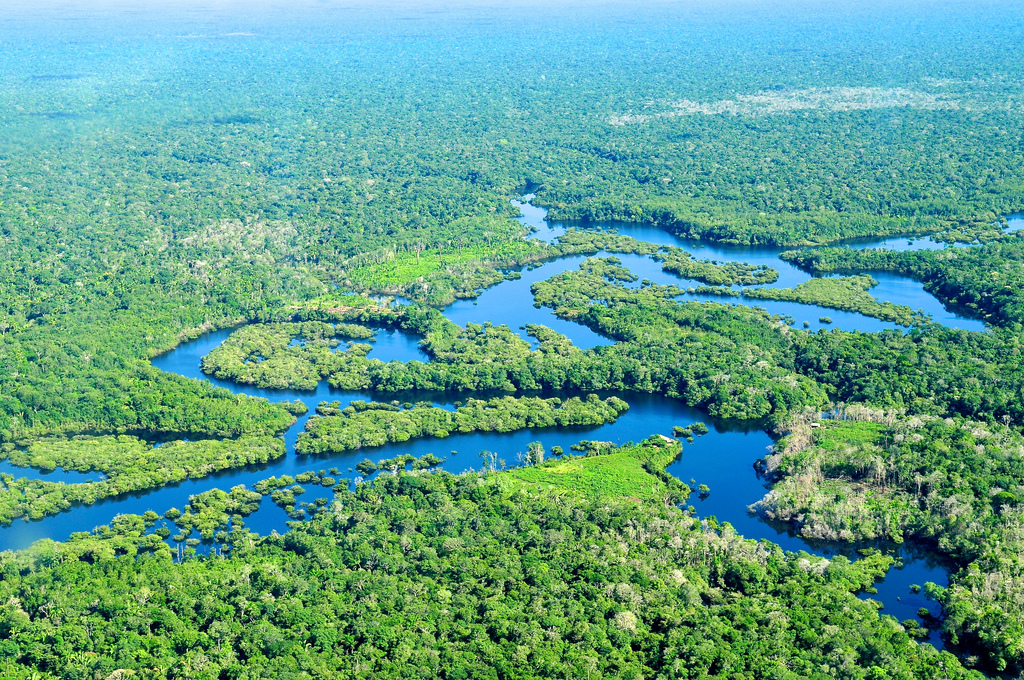 Researchers now credit Brazil with cutting the rate of Amazon deforestation by 70 percent. How valid is that praise? (Photo: CIFOR/Flickr)

Like the United States, Brazil has a long way to go with its response to global warming.
By Jill Richardson | June 27, 2014

Researchers now credit Brazil with reducing its carbon emissions more than any other country by cutting the rate of Amazon deforestation by an impressive 70 percent. The country now leads “the world in mitigating climate change,” exclaimed Daniel Nepstad, one of the researchers.

How valid is that praise?

After all, is it really fair to consider not cutting down big swathes of rainforest as a positive action?

It’s pretty typical of the way experts talk about greenhouse gas emissions these days. They assume that a country will do a certain amount of deforestation and polluting, and then give it credit for not doing it.

Aside from that, let’s look at Brazil and its deforestation problems. Agriculture is largely driving its deforestation — mostly cattle and soybeans. And, as a study reported in Nature notes, Brazil has continued to intensify production of both, resulting in an increase in emissions that cuts into the benefit of reduced deforestation.

The equation is based on the fact that trees take carbon out of the atmosphere, whereas agriculture puts carbon and other greenhouse gases like methane and nitrous oxide into the air. And not all forms of agriculture are equal.

Cutting down fewer trees is a good thing — that means more trees are left standing, doing their pollution-cleaning job. But the increased pollution from agriculture is cutting into the benefit of those trees.

Once upon a time, cattle were all raised on grass — in the United States as well as in South American nations like Brazil, Argentina, and Uruguay. And the land limits the number of cattle one can raise.

According to basic “cowboy math,” the land can support one cow per square mile for each inch of rainfall it receives in a year. That means an area that gets 18 inches of rain every year can only support 18 cows per square mile.

But, if you concentrate cattle in a feedlot and feed them corn, soybeans, and other high calorie foods in addition to grass, you can raise many more cattle in a small space — and you can do so faster because of the increased calories in their diet.

Brazil and Argentina are two of the world’s top soybean producers (only the United States and China produce more). The soy mostly feeds factory-farmed animals, in South America, China, and Europe.

Producing vast quantities of soy far from where it will be consumed guzzles fossil fuels and produces greenhouse gas emissions. Plus, the cattle emit methane when they belch.

The Amazon isn’t the only Brazilian ecosystem accommodating large-scale, polluting agriculture. So is the savannah-like Cerrado, an area far more deforested than the Amazon, and the Pantanal, the world’s largest freshwater wetland system. And just because most Americans don’t realize that the Pantanal is 10 times bigger than Florida’s Everglades and haven’t heard of it or the Cerrado, that doesn’t mean these places aren’t worth saving.

Brazil also tried to score “green” points with its World Cup marketing. Many of the stadiums it built and renovated for the games sport green design features like solar panels and water conservation. But that doesn’t make this event environmentally responsible.

Any energy and water conserved as a result of those efforts will pale in comparison to the environmental toll taken by flying foreign visitors around the games because the stadiums are spread widely across a country nearly as big as ours.

Just as Brazil needs to be more honest about how green this World Cup is, it needs to keep cleaning up its climate act. Like the United States, the country has a long way to go.

Jill Richardson, an OtherWords columnist, writes about all aspects of the food system, from farm to fork. She’s the author of Recipe for America: Why Our Food System is Broken and What We Can Do To Fix It and blogs at La Vida Locavore.