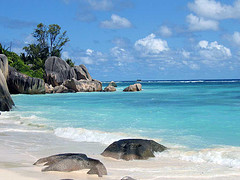 Offshore accounts keep island economies afloat. But they also might sink them.
By Khadija Sharife | February 24, 2010

The water is crystalline, the sand is whiter than white, and elegantly bent palm trees sway in the breeze. This is how the Seychelles markets itself: as “another world.” Tourism is the mainstay of this heavenly island, averaging 20 percent of GDP and 60 percent of foreign exchange earnings.

But given the climate crisis, prospects are dim for climate-vulnerable island nations like the Seychelles. Half of its population lives in coastal areas directly exposed to rising ocean levels, coastal erosion, flooding, and erratic rainfall. The island is also heavily dependent on agriculture, with 70 percent of crops located in the coastal areas and subject to increasingly common saltwater tidal surges. The rising waters thus threaten the livelihoods of the people of Seychelles, as well as the existence of the island itself.

According to projections by the Intergovernmental Panel on Climate Change, many of these island nations are likely to disappear by the end of 21st century. One reason may be the increasing scarcity of fresh water sources. “The Seychelles, in particular, is almost entirely dependent on surface water and therefore highly vulnerable,” revealed the UN Framework Convention on Climate Change. The future of this paradise isn’t as immediately dire as the Maldives, its fellow member of the Alliance of Small Islands States (AOSIS) formed in the lead-up to the Copenhagen Climate Summit. The lowest country on the planet, the Maldives has a maximum ground level of 7.5 feet (one inch below the height of Chinese basketball player, Yao Ming). But the Seychelles would be one of the next islands in line if the water level doesn’t stop rising.

The sad irony, however, is that despite producing little in the way of carbon emissions, both island nations may have contributed to their own demise. After all, the Seychelles and the Maldives share the same secret underpinning to their respective economies. More than 50 percent of AOSIS members are secrecy jurisdictions, misleadingly labeled as offshore centers and tax havens. These economies — characterized by opaque legal and financial services ensuring little or no disclosure, high levels of client confidentiality, and few requirements for substantial economic activity — are recipients of illicit capital. These laundered profits have been siphoned from resource-rich but artificially impoverished developing nations.

Such island hubs act as key facilitators of the network by providing offshore financial services, remotely controlled from onshore head offices such as the City of London. Mobile units of lawyers, bankers, and accountants serve as the intermediaries between white-gloved multinationals and black-gloved political elites. The money that could otherwise go toward reducing the carbon footprint of multinationals and funding sustainable development in developing countries is instead sunk in island accounts. And that money may well end up sinking the islands themselves.

Presently, almost $13 trillion in secrecy-protected wealth is held offshore and out of reach. If moderately taxed, these funds would yield over $250 billion. Such funds could more than finance the Millennium Development Goals, which are estimated by the World Bank at $40-$60 billion annually through 2015. They could also go toward the adaption and mitigation funds needed by developing and emerging nations, which the UN puts at $4-86 billion annually.

Most island economies are politically and economically dependent on major economies like the United Kingdom and the United States. They compete to be the offshore repository of choice by offering opaque financial and legal services and low or zero tax rates. Through these secrecy services, developed governments are also on the final receiving end of illicit flight from regions like sub-Saharan Africa, which is a net creditor to developed nations.

The Source of Funds

Nigeria is Africa’s largest oil producer and the fifth largest exporter to the United States. Since the 1960s, the country’s political and military elite has stolen more than $400 billion in oil revenues from Nigeria’s citizenry and deposited it in secrecy jurisdictions such as Switzerland. Meanwhile, despite the extravagant promises of multinationals like Chevron operating in the country, Nigeria’s people have become progressively poorer. The extractive industries have generated considerable opposition, human rights violations, and violence. And the mass ecological degradation is pegged at $5 billion per annum.

Africa does not share much responsibility for global warming. The continent only contributes 3 percent of global greenhouse emissions. But the extractive industries that operate in Africa are major emitters. Shell, for instance, emits more greenhouse gasses than many countries: Its carbon emissions of 102 million tons in 2005 exceeded the emissions of 150 countries.

Although Africa occupies a small carbon footprint, the continent’s autocratic regimes in Angola, Nigeria, the Congo, and Gabon are located at the base of the commodity chain and depend primarily on the capital-intensive extractive industries that supply the world’s largest carbon-intensive engines with a significant share of fuel. But neither the corrupt regimes nor the corporations that financed and facilitated global warming made it to the Copenhagen agenda.

The discussions at the climate change conference in Copenhagen last year focused on “developed” and “developing” nations, and the new market for carbon offsets. Industrialized governments created these carbon permits from thin air and allocated them to the largest multinationals with the largest carbon footprints. The latter architects of the system, Goldman Sachs, with foreign subsidiaries criss-crossing the globe from the Bermuda to the Cayman Islands, Hong Kong to Jersey, Ireland, the British Virgin Islands and Africa’s own world-famed hub, Mauritius, not only designed the huge carbon market, but also hold a 10 percent share in Al Gore’s Chicago Climate Exchange (CCX) — the pilot carbon trading program in the United States.

Gore’s CCX, whose board includes top VIPs such as the UN’s Kofi Annan and the World Bank’s James Wolfensohn, had advocated for the privatization of the atmosphere as far back at the Rio Earth Summit.

One well-publicized engine of the new carbon trade is the Clean Development Mechanism (CDM), which enables polluters to circumvent caps by financing projects in the developing world that emit little or no carbon. Yet, according to studies by Stanford University’s Energy and Sustainable Development Program, “between a third and two-thirds” of CDM projects do not represent real reductions.

Meanwhile, G20 governments subsidized fossil fuels to the tune of $300 billion in 2009. So, as the G20 spends its time creating a carbon trade market that does little to reduce carbon emissions, multinationals continue to expand their extractive enterprises, dictators continue to siphon off capital, financial firms cash in on pollution credits, and this illicit capital continues to flow into offshore locations that are themselves threatened by the rising waters associated with global warming.

Khadija SharifeFPIF contributor Khadija Sharife is a journalist, and visiting scholar at the Center for Civil Society (CCS). She’s based in South Africa.