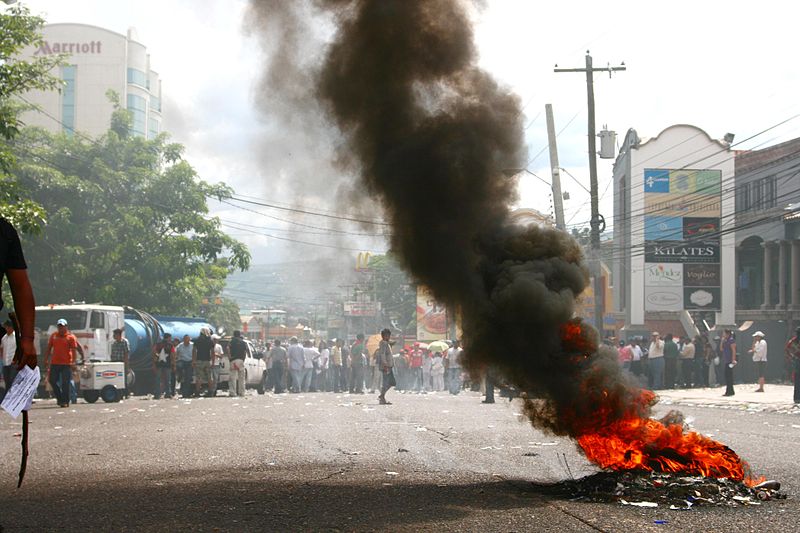 The disputed election of new Honduran president Juan Orlando Hernandez comes amid social tensions that have risen steadily since the 2009 coup. (Photo: Wikipedia)

Honduras' new president, Juan Orlando Hernández, takes office amid rising tensions between developers on one side and indigenous and campesino communities on the other.
By Sam Badger, Giorgio Cafiero | January 27, 2014

This article is a joint publication of  Foreign Policy In Focus and TheNation.com.

Honduras’ new president, Juan Orlando Hernández, takes office on January 27. However, given ongoing questions about his victory in November’s election, the legitimacy of Hernández’s presidency remains in doubt. On this shaky democratic mandate, Hernández will likely continue to militarize Honduran society while implementing more of the neoliberal economic measures that have increased income inequality in the country since the 2009 coup d’état, which deposed the populist president Manuel Zelaya.

These developments bode poorly for the consolidation of democracy in Honduras, where the military has committed human rights violations with impunity throughout the post-coup era. Continued repression in this increasingly polarized country will dim hopes for regional stability and democratization in post-coup Honduras.

A Return to Democracy?

In anticipation of November’s election, many Hondurans held high hopes about a return to democracy four years after the military ousted the democratically elected Zelaya and installed a right-wing caretaker government. Zelaya’s supporters largely boycotted the 2009 election that followed the coup, pushing turnout below 51 percent and casting a pall on the vote, which was overseen by the coup authorities and protested by the region’s left-leaning governments. While the Honduran constitution barred Zelaya from running in the 2013 presidential election, his loyalists decided to participate and supported his wife, Xiomara Castro.

As the presidential candidate of the Libre Party, which was created by anti-coup activists in the aftermath of Zelaya’s ouster, Castro offered a vision for Honduras that greatly contrasted with Hernández’s. Although in agreement with Hernández that Honduras’ dire homicide crisis needed to be addressed, Castro opposed Hernández’s calls for deploying more soldiers on the streets, instead calling on the military to secure the country’s international borders from drug traffickers. While speaking of a “new Honduras,” Castro emphasized support for her husband’s progressive policies. Her campaign received widespread support from many elements of Honduran civil society, including prominent artists and writers, low-income Hondurans, and indigenous communities.

After polls closed, the electoral authority — run by Hernández’s right-wing National Party —announced that Hernández had won 36.8 percent of the vote, defeating Castro by a margin of 8 points. The European Union (EU) and the Organization of American States (OAS) quickly declared that Honduras’ election was free, fair, and transparent, yet such claims are bitterly disputed by many Hondurans. Other outside observers have since lodged complaints of vote buying, voter intimidation, ballot box stuffing, and violence against opposition candidates and supporters.

The Libre Party released its own vote count several days after the election and documented an over-count of 82,301 votes for Hernández and an under-count of 55,720 for Castro. These figures alone constitute 4.6 percent of the national vote, equivalent to more than 50 percent of the National Party’s lead in the government’s tally. Leo Gabriel, an Austrian delegate from the EU’s observer mission, told Brazilian media that he witnessed considerable irregularities in the election, noting that living voters showed up as deceased and dead people’s votes were counted. Gabriel also asserted that votes were bought and sold and that one-fifth of the original tally sheets were sent to an illegal server. Moreover, the murder of three Libre Party activists during the weekend of the election underscored the environment of fear and intimidation in which the election was held.

Triumph of the Oligarchs

It’s difficult to hold an election that is entirely transparent in any developing country. But if the large pro-Castro demonstrations that followed the election are any indication of public sentiment, it is doubtful that many Hondurans will accept Hernández as a democratically legitimate leader.

Festering social and economic conflicts exacerbated by Zelaya’s ouster will make matters worse for the new administration. Two in particular include the campesinos’ struggle to reclaim land from major agribusinesses and the Lenca tribe’s battle to prevent the construction of a dam in its traditional homeland. Both of these conflicts have sparked crackdowns that have brought death and unrest in recent years.

Carbon markets have driven much of the unrest, with entrenched Western economic interests pushing for investment in “green energy” in Central America. In Honduras, this takes the form of large palm oil plantations owned by the country’s economic oligarchs. The palm oil plantations are located on land once farmed by poor campesinos, but which were transferred to big agribusinesses such as the Dinant Corporation.

Dinant is owned by Miguel Facusse, one of the wealthiest men in Honduras. His company, which pushes peasants off their land and has been accused of hiring hit squads to target resisters, has received investment funds from the World Bank for the production of “green energy,” and is able to count the investment as “sustainable” and “green” for the purpose of selling carbon credits on international markets. The World Bank’s own compliance office investigated the bank’s investment in Dinant and found that the institution had been willfully ignorant of the social problems emerging from within Honduras.

In 2009, a number of campesinos who claimed to have been removed from the land started an organization called the United Peasants Movement, or MUCA. MUCA occupied stretches of Facusse’s land, creating subsistence farms and cooperatives. Since then, violence has been waged between Dinant’s private security forces and the Honduran state on one side, and armed campesinos on the other. Blood has been shed on both sides, with most of the casualties being poor farmers. In response to the violence, the Honduran military has reportedly reinforced the strength of the state security apparatus in the region.

Tensions are also rising in the Rio Blanco region, where the Lenca indigenous tribe has resisted a recent plan to construct hydroelectric dams on the Gulcarque River, situated in its traditional land. The project — set to benefit DESA, a company tied to the oligarchs, and Sinohydro, a Chinese firm — was pushed forward without the Lenca tribe’s consultation or consent. In response, the Lenca began to set up roadblocks and protests. During one rally, government soldiers shot at least two protestors, resulting in one death. Indigenous leaders also claim to have received death threats from the military and police.

Such clashes reinforce the widely held view that the 2009 coup — along with events since — was orchestrated by Honduran oligarchs. (Wikileaks cables have suggested that Facusse may have been personally involved, although he denies any role.)

It remains doubtful that peace can be reached when indigenous communities and campesinos view the government as a representative of the private interests arrayed against them and their livelihoods — a perception no doubt exacerbated by the murky circumstances of Hernandez’s recent victory. Long-term questions regarding the stability of Honduras and the government’s ability to administer an inclusive republic must be raised alongside questions about its legitimacy and desire to peacefully resolve internal conflicts.

Even if the November election was legitimate — and there is ample reason to doubt that it was — the continued marginalization of indigenous communities will bode poorly for democratic consolidation in post-coup Honduras.

Sam Badger is an associate lecturer of philosophy and graduate student at San Francisco State University. Giorgio Cafiero is a Washington, D.C.-based foreign affairs analyst and a regular contributor to the Huffington Post.