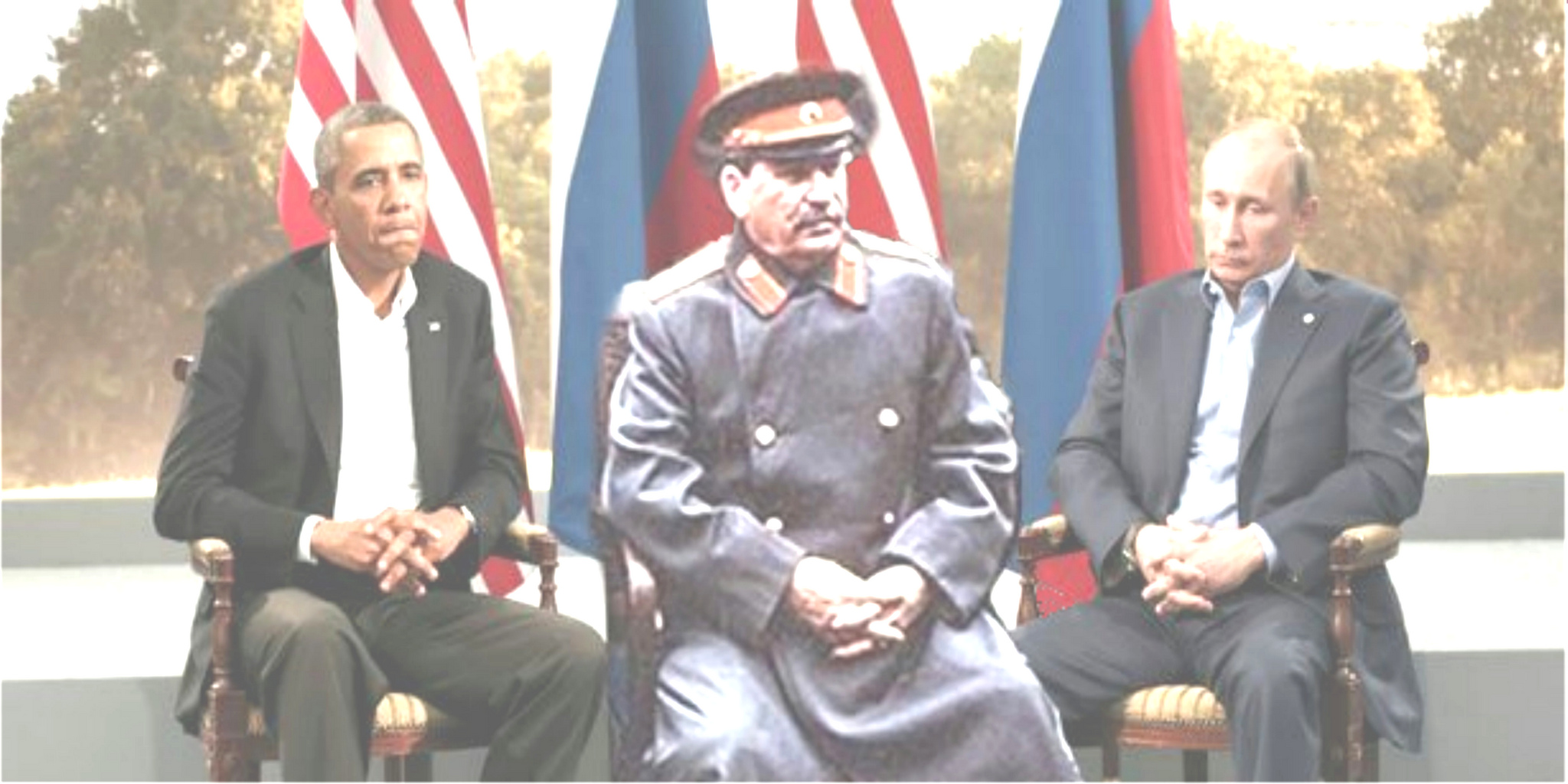 Vladimir Putin is not reviving the Cold War. Rather, the U.S. failed to end it when it had the chance. (Image: IoSonoUnaFotoCamera / Flickr)

Vladimir Putin is not reviving the Cold War. Rather, the U.S. failed to end it when it had the chance.
By John Feffer | September 10, 2014

In ’89, it looked as though the war had finally ended.

For five decades the conflict had ground on, and both sides had grown weary of it all. There had been previous pauses in the hostilities, even a détente or two, but this truce looked permanent. Sure, there were still tensions after ’89, and a few skirmishes broke out. But the peace held, miraculously, for more than 25 years. Then, as suddenly as it had begun, the truce collapsed in ’15, and the war picked up where it left off.

I’m not predicting the future. I’m talking about 1389.

From 1389 to 1415, the second peace between England and France marked the longest break in the Hundred Years War. But Henry V, who saw no glory in peace, started things up again at the Battle of Agincourt with the cry of “once more unto the breach, my friends!” (or so Shakespeare would have us believe). The conflict would rage for another 40 years until the English were finally kicked back across the Channel for good.

We never know the length of the wars that drag on around us. When peace improbably comes, we’d like to think that the treaties are permanent, that they’ll turn former combatants into grumbling but harmless neighbors.

Wars, however, are like acid reflux—they keep recurring no matter how much Pepto-Bismol we chug. Perhaps the Vietnamese thought they’d finally won their independence when they delivered a stinging defeat to the French at Dien Bien Phu in 1954. Perhaps the Afghans imagined that self-determination was theirs when the Soviet superpower withdrew in 1989 (or, for that matter, when the British withdrew in 1880). Wars defy our efforts to write their obituaries.

Indeed, viewed over the long term, war is the very oxygen that we breathe, while peace is but the brief interval when we hold our breath and hope for the best.

The world is currently in the midst of several long wars that don’t have any clear endpoint. The battle over the boundaries of the Middle East, set into motion by the disintegration of the Ottoman Empire, continues to rage in Syria, Iraq, and Israel/Palestine. Conflicts over borders inside Africa, ignited by the collapse of colonialism, are still being fought in Congo, Sudan, and elsewhere around the continent. Then there’s that great misnomer, the “war on terror,” that stretches back before September 11 and will extend well into the future.

By contrast, we’ve been told ad nauseum that the Cold War is over. I’m sure you remember the funeral. We all watched the corpse lowered into the grave, and we happily lined up to throw a handful of dirt into the hole. The inscription on the gravestone—1946-1991—recorded the conflict’s birth in Fulton, Missouri, which was midwifed by Winston Churchill and his infamous Iron Curtain speech, to the quiet death that came with the dissolution of the Soviet Union. But you’ve seen enough whodunits to suspect, even as you were dancing on the grave, that the coffin buried underneath was empty.

The most obvious evidence that reports of the death of the Cold War had been greatly exaggerated has come from Asia. For two decades, I’ve had to add parenthetically to my articles on East Asian security that the Cold War may have ended in Europe but it was still alive and well along the Pacific rim. The Communist Parties of China, North Korea, Laos, and Vietnam all refused to follow the example of their European counterparts by stubbornly clinging to the historical stage, by their fingertips if necessary. The Korean peninsula has remained divided between ideologically implacable adversaries, mainland China and the United States continue to regard each other as military competitors, and the region is divided down the middle between China and its allies versus the United States and its allies.

The coffin was empty precisely because the Cold War had lived to fight another day—in the middle of the DMZ, across the Taiwan Strait, among the islands of the South China Sea.

But even in Europe, the traditional narrative of Cold War history has had its irregularities. During the détente period of the 1970s, Washington and Moscow worked out a reasonable modus operandi through arms control treaties, grain sales, and exchanges of ballet troupes. Pundits increasingly subscribed to the convergence theory whereby capitalism became more state-directed and Communism more market-driven. Then came the Soviet invasion of Afghanistan, the victory of Reaganism, the resurgent fear of nuclear war, and it was once more unto the breach, my friends, comrades, and neocons.

In the 1980s, the Soviet leadership became ever more geriatric as Brezhnev, Andropov, and Chernenko passed away in a blur of state funerals. Then it was the Warsaw Pact’s time to go into hospice. When Gorbachev stopped supplying Soviet life support, the Soviet bloc expired. Two years later, the Soviet Union followed suit. One side in the global tug-of-war stopped pulling. Game over.

Or maybe not. Maybe everything we’ve been told about the collapse of the Cold War is false. With the recent conflict in Ukraine, and heightened tensions between Washington and Moscow, observers across the political spectrum speak of a revival of the Cold War—the hawks with anti-Russian relish and the doves with anti-war horror.

But imagine instead that we’re in the middle of our own Hundred Years War, and the last 25 years were just a hiatus. After all, many of the features of the Cold War are still in place. Although two of the Soviet successor states—Ukraine and Kazakhstan—gave up their nuclear weapons, Russia has continued to maintain its much larger arsenal. And the United States has not only barely touched its own equally sizable deterrent force but has thrown billions of dollars into modernizing the very weapons that Obama has pledged to abolish (at some undetermined point in the future). Nor did NATO disappear even though it should have been obvious to everyone—except those on the NATO payroll—that the organization no longer had a purpose. Its vestigial status certainly didn’t prevent the alliance from pushing eastward to the very doorstep of Russia’s diminished sphere of influence.

The current focus of attention by the Cold War revivalists is the behavior of Vladimir Putin, who has been cast in the role of Henry V. He is responsible for the upsurge in bilateral tensions largely because of his territorial ambitions—first Georgia, then Crimea, and now eastern Ukraine. He has also played hardball with energy sales to Europe. He continues to back dictators like Assad in Syria. And he has worked to establish geopolitical formations to balance U.S. power—the Eurasian Union with Kazakhstan and Belarus, the Shanghai Cooperation Organization with China and the Central Asian countries, the BRICS with Brazil and India.

Putin’s nationalism is noxious, and I’ve written about the impact of even more intolerant strains of extremism on his policies. But here’s the rub: his foreign policies are not substantially different than those pursued by that supposed Westernizer Boris Yeltsin. Russian-backed separatists challenged the sovereignty of the Georgian government in 1992. In that same year, Russian troops also occupied part of Moldova in support of Transnistrian separatists. Hafez al-Assad, Bashar’s father, visited Russia in 1999 and Yeltsin proclaimed him “an old friend of Russia.” In other words, when it was supposedly under the thrall of liberalism, Russia continued to pursue its interests in the “near abroad” and cultivate controversial allies further afield.

The difference is that Yeltsin did not challenge U.S. unilateral power. Economically weak and no longer able to keep pace with the United States militarily, Russia did not push back hard as NATO expanded eastward, first with its Partnership for Peace and then with actual membership for the former Soviet republics of Estonia, Latvia, and Lithuania. Yeltsin was comfortable being a junior partner of the United States, as long as Washington allowed him latitude in his new circumscribed sphere of influence, permitted Russia to hold onto its nukes and export cheap jets and tanks, and ushered the country into the G7 and the WTO.

The Cold War, then, was not just about a confrontation between ideological foes. The Cold War was about a confrontation between two countries that each aspired to maintain hegemony over the entire planet. The Soviet Union dropped out of that competition. And Russia under Putin continues to remain focused on concerns along its borders. The United States, on the other hand, has not changed its attitude. And that, ultimately, is why the Cold War never died.

If the United States had disbanded NATO, pushed for nuclear abolition, and helped to create a new security architecture for Europe that included Russia, the Cold War would have died a natural death. Instead, because the institutions of the Cold War lived on, the spirit of the enterprise lay dormant, only waiting for the opportunity to spring forth.

It’s not that the United States conjured its Russian adversary back into existence out of some misguided nostalgia. Rather, the inevitable consequence of our refusal to restrain our global ambitions necessarily created a counterforce. In the end, it’s boils down to physics: for every action there is an equal and opposite reaction.

So, let’s stop talking about the Cold War’s revival as if Vladimir Putin is the one who raised the dead. We are the vampire hunters who failed to drive a stake through its heart. So we shouldn’t be surprised, when we go out for a stroll one day to survey our domain, to hear the click of sharp teeth poised to tear into its latest victim.