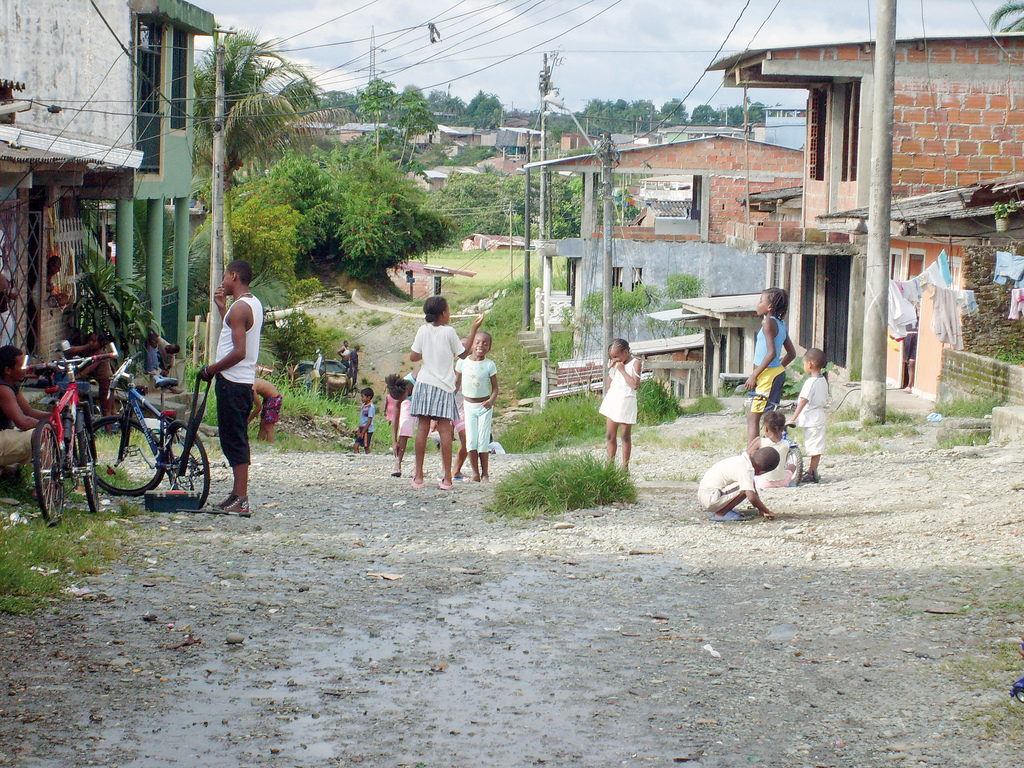 Obama lauded Colombia’s “tremendous progress” over the past decade and praised Santos for his peace talks with the Revolutionary Armed Forces of Colombia (FARC). He commended Santos’ efforts on human and labor rights, and hailed the “success” of the U.S.-Colombia Free Trade Agreement. So good were the conditions in Colombia, he said, that the two countries’ longstanding collaboration on Colombia’s security could now make way for a focus on economic partnership.

But the situation in Buenaventura — Colombia’s principal port city, which I visited in September — hardly supports the rosy picture Obama presented. To be certain, evidence of international trade abounds, from huge construction projects to the multi-billion dollar port. Yet just minutes away, one encounters extreme poverty, with the unemployment rate topping 60 percent among the Afro-Colombians who constitute the majority of the city’s population. Massive capital improvement programs thrive next to abject poverty, while brutally violent murders occur in the shadows of towering cranes. And despite Colombia’s formal commitments to labor rights, port workers lack the most basic of labor protections.

Labor Protections in Name Only

My visit to Buenaventura, the shipping hub through which much of Colombia’s U.S.-bound trade travels, took place just 16 months after the implementation of the United States–Colombia Trade Promotion Agreement (CTPA) in 2012.

Designed in the mid-2000s to expand the U.S. trade presence throughout the Americas, the agreement languished for years before taking effect. Voicing powerful objections to making a trade deal with the most dangerous country for trade unionists in the world, members of the U.S. Congress, civil society, and unions throughout the hemisphere successfully delayed its approval. They noted that Colombia was (and still is) engaged in the hemisphere’s longest running conflict, where even the most basic of human rights are not respected and most institutions lack the ability to protect vulnerable populations. Concerns about the CPTA extended to questions of people’s livelihoods as well — trade experts predicted that the agreement would threaten Colombia’s already struggling small farmers and drive down wages as they were forced to compete in international markets.

To address widespread concerns over labor rights violations and anti-union violence in Colombia, and to pave the way for passage of the agreement in the United States, in 2011 Obama and Santos signed a “Labor Action Plan” (LAP) that outlined concrete steps to protect Colombia’s workers. The LAP has led to some important changes, including the re-establishment of an independent Labor Ministry, modifications in Colombian labor law to curb subcontracting, and protection for labor leaders.

But the vast majority of these changes have been in name only. For example, where some forms of illegal contracting have been outlawed, others have appeared. Although the Labor Ministry has levied fines, companies have refused to pay. And although early signs indicated decreased anti-union violence, in 2013 trade unionist murders increased for the first time in years. Because the LAP lacks a binding enforcement mechanism to require Colombia to show progress, its implementation continues to depend heavily on political will and outside pressure. Not surprisingly, most of the promises contained in the LAP have not been realized.

The View from Colombia’s Largest Port

In no part of the country is the privileging of trade over human rights more evident than in Buenaventura, which I visited with a delegation of union organizers and congressional staffers to explore the human and labor rights situation.

Buenaventura is known as both a receptor and a driver of internally displaced persons. The concept sounds like a cruel joke. Fleeing violence in the rural areas along Colombia’s Pacific coast, families come to Buenaventura in search of some semblance of security. Yet few find it, and many subsequently leave. According to the United Nations, more than 2,800 people were displaced in the first half of November alone, as armed groups vied to control the city.

Guerrilla and paramilitary groups have long battled to control the valley leading into Buenaventura, which is a vital artery to North American drug markets. Their violence has been brutal. For example, in the emblematic 2001 Naya massacre south of the city, paramilitary groups slaughtered hundreds of villagers — some beheaded by machete, others by chainsaw. More recently, armed groups have turned on the city’s Afro-Colombian women — engaging in decuartizando, or murder by quartering, of community leaders.

The free trade agreement did not initiate this violence, but as leaders of the Afro-Colombian Women Human Rights Defenders Project point out, it’s not unrelated either. This year, when at least 12 women were brutally murdered in the city, activists organizing nationwide protests against the killings denounced “the lack of attention to this crisis and the indifference from governmental authorities.” They suggested that the government was privileging the interests of those profiting from the free trade agreement over the needs of those being killed.

With all that violence, why do so many people stay in the city? “I was born here, I will raise my family here, I will die here,” Harrinson Moreno, a community activist with the Afro-Colombian NGO Black Communities Process, explained to me when I asked why he didn’t simply leave Buenaventura. Instead, Moreno and his colleagues have staunchly stood up for the rights of Afro-Colombians, denouncing the military’s ties to paramilitaries and condemning government neglect.

But for all those who refuse to leave, others do depart — driven out by the very free trade agreement that was supposed to have brought prosperity. As the port has dramatically expanded in recent years to accommodate Colombia’s newly tariff-free exports, local residents — many of whom have been evicted from their homes at least once previously—have been forced to flee yet again as cranes dominate in areas they once called home.

Those who stay often find it impossible to make a living, given the pollution generated as new industries pour into the once-verdant area. “You can find fish at the market, and when you cut them open, they have coal inside,” Moreno said, explaining how many residents have lost their livelihoods because of the growing pollution. “The traditional fishing areas now don’t have any fish.”

Ideally, labor organizing could improve workers’ prospects amid burgeoning international commerce. But sadly, trade unionists demanding basic protections and the right to organize face enormous obstacles. Despite the LAP’s commitments to promote direct hiring and other labor protections, over 80 percent of Buenaventura’s workers are illegally subcontracted. By subcontracting — or hiring workers through third-party entities — the company that runs the port effectively stymies the port worker union’s ability to bargain collectively for a contract, secure health and pension benefits, or demand basic safety protections.

These aren’t isolated events, either. According to an October report by U.S. Representatives George Miller (D-CA) and James P. McGovern (D-MA), labor rights violations have continued throughout the country since the free trade agreement was implemented. The congressmen, who met with union, management, and government officials throughout the country, found illegal firings and a flagrant disregard for labor law to be the norm, rather than the exception.

News of this painful reality seems not to have reached the White House. Following his meeting with Santos, Obama declared the free trade agreement a resounding success and said that what remains to be done amounts only to “some details that are being worked on.”

But other officials may be taking note. According to Rep. Miller, Colombian Labor Minister Rafael Pardo Rueda “gave his assurance that his department is taking the problems very seriously.” Within both the U.S. and Colombian labor departments, Miller added, “there is an understanding that these issues need to be resolved.”

Directions for the Future

Colombia has indeed seen progress in recent years — its homicide rate has dropped and an ongoing peace process offers hope that the country’s decades-long civil war could end. But this is far from Colombia’s “mission accomplished” moment. Widespread violence continues throughout the country, and despite promises for change linked to the free trade agreement, workers’ rights continue to be ignored. Meanwhile, Colombia’s own initiatives to promote human rights — among them some well-intentioned efforts — have failed to deliver progress.

Yet while the situation may seem bleak, it is far from hopeless. The Colombian government can protect labor rights by investigating abuses, ensuring that fines are levied and paid, and making sure to address infractions. Without an end to impunity — be it related to street violence or workplace violations — change will not be possible.

In Buenaventura, a civilian state presence must be established to address continued humanitarian concerns and make sure the displaced population receives the protection it needs. Paramilitary groups must be dismantled so the roots of violence can be addressed. This will require more effective investigations and prosecutions of both armed actors and the corrupt state officials that support them. And finally, the United States must regularly — in public and private — make it clear that it requires its trade partners to enforce human and labor rights.

Colombia has a long way to go before it becomes the success story Presidents Obama and Santos claim it to be. Both countries need to realize that while some modest gains have been made, it is folly to prioritize trade over human rights. Only through the rigorous application of labor laws, the investigation and prosecution of acts of violence, and the protection of vulnerable communities can real and lasting progress be achieved.