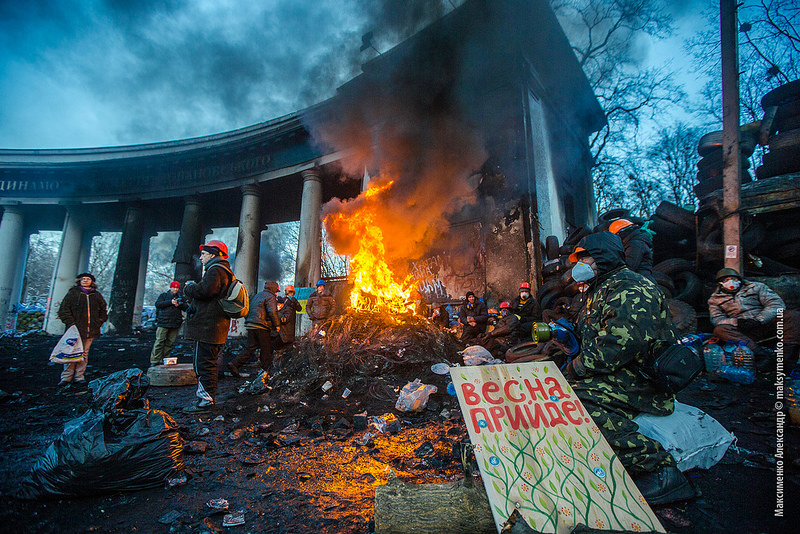 Clashes of colors — red shirts vs. yellow shirts in Thailand, a faded orange revolution in Ukraine — have many people reaching for the rainbow in response.
By John Feffer | February 5, 2014

I played for Green when I was growing up. That was my soccer team. We were divided up by color: Green vs. Red, Gold vs. Blue. The teams were chosen at random, but we became fiercely attached to our color. Friendships across color lines became strained. We talked of “Purple power” and the “Gold tradition.” For all I know, the league was run by psychologists testing the influence of ideology on child development. I loved being Green.

By contrast, the baseball teams in my hometown were sponsored by local businesses. The match-ups had an entirely different flavor: the dry cleaner vs. the diner. Adults back in 1975 might have found this arrangement vaguely ominous, since that was the year the movie Rollerball came out. In that glimpse into the world of 2018, war has been outlawed and replaced by corporate-sponsored athletic contests just as ruthless as the battlefield. None of us Little Leaguers, of course, took the field in those days with spiked gloves like the ones James Caan flaunts in the movie. We did, however, run around like little billboards for local businesses — though I can’t imagine that my striking out or repeatedly dropping fly balls in right field encouraged anyone to shop at the local hardware store.

We are only a few years away from the time that Rollerball imagined. War has not been outlawed. Corporations are more powerful than 40 years ago, but even though they certainly have grabbed the naming rights of many stadiums, they haven’t replaced wealthy individuals as the primary owners of sports teams. We are still some years away from gladiatorial contests between Lockheed Martin and Microsoft.

Colors, on the other hand, have remained a major way of dividing up sides. In Thailand today, the red shirts battle the yellow shirts. We have our own blue states and red states. A series of revolutions have pitted popular forces under the banner of a vibrant color against the gray bureaucracy of despotic government: Rose (Georgia, 2003), Orange (Ukraine, 2004), Blue (Kuwait, 2005), Saffron (Burma, 2007), Green (Iran, 2009), Rainbow (LGBT, everywhere).

The use of colors to identify the sides in a conflict is certainly nothing new. The U.S. Civil War was a contest between the Union blues and the Confederate grays. The Russian civil war following the Bolshevik revolution of 1917 pitted the Reds against the Whites. The Cold War was only a minor variation on that theme, with the Reds arrayed against the Red, White, and Blue. We’ve drawn our colors from uniforms and flags and political parties. Sometimes, like during my soccer days, the colors seem entirely arbitrary. But that hasn’t lessened the passions involved.

Consider the current situation in Thailand. The color politics in the country are rather complicated. The royal color is blue. But King Bhumibol Adulyadej — who has been in power 67 years, longer than any other living monarch — was born on a Monday, which Thais associate with the color yellow. The supporters of the king, and by extension a more conservative order, have adopted the monarch’s birth color.

On the other side stand the supporters of exiled former Prime Minister Thaksin Shinawatra, a corrupt populist. The red shirts of the Thaksin side represent, depending on whom you ask: the people, the land, the nation, the blood shed during Thailand’s independence struggle, or perhaps all of the above. For ethnic Chinese in Thailand — and the Shinawatras come from an ethnic Chinese family — red also means good luck. For the left-leaning, red might also represent socialism.

The battle in Thailand is over the future of the country’s democracy. You might think that given their color — yellow was also the hue associated with “people power” in the Philippines in the 1980s — the yellow shirts in Thailand were massing in the streets of Bangkok in support of participatory democracy. As Foreign Policy In Focus columnist Walden Bello points out, you’d be wrong.

“Professional and highly educated people crowd the streets, and young people shout passionately against corruption,” Bello writes in Thailand’s Deep Divide. “Middle class liberals around the world easily find much they can relate to. But one thing about this movement bothers liberal analysts, including quite a few in the foreign press. The protesters appear to have lost faith in the key tenet of representative democracy: rule by people or parties elected by the majority of citizens.”

On Sunday, the yellow shirts tried to disrupt the parliamentary elections and succeeded in blocking the process in 69 out of 375 electoral districts. Indeed, with the main opposition party boycotting the elections, the yellow shirts prefer a different political solution: an unelected “people’s council.” The anti-government protestors are skeptical of democracy because the party of the current Prime Minister Yingluck Shinawatra — Thaksin’s sister — was elected in a landslide and is expected to win again in this election by a similar margin.

It’s not just politics that determines which color you support in Thailand. “In addition to feeding its own population, and as a major exporter of food, the country has a strong industrial base near Bangkok which is generally controlled, or supported by, elements of the yellow side,” explains FPIF contributor Layne Hartsell in Thailand’s Protests and the Global Economy. “The red shirts, meanwhile, generally favor changes that would lead to closing the gap in wealth and power between the farmers of the north and upper classes in and around Bangkok.” Rice is the place where politics and economic intersect in Thailand. A corruption investigation into Yingluck’s involvement in the country’s huge rice subsidy program might complicate her political future.

Perhaps out of this conflict, a new combination of red and yellow will emerge: an orange revolution committed to economic growth for all and corruption for none. Oh, but that color seems to have already gone out of political style.

Jumpcut to Ukraine, a place where the color has drained out of the conflict. The Orange revolution was such a profound disappointment to most Ukrainians — it produced a government that was political inept, economically maladroit, and just as corrupt as it predecessor — that all talk of orange-ism has faded in the country. One revolution leader became a very unpopular president; the other became prime minister and now sits in jail on corruption charges.

Today, the demonstrators in Kiev want the current, Moscow-leaning president, Viktor Yanukovych, to step down. In a gesture of compromise, Yanukovych offered the positions of prime minister and deputy prime minister to top opposition leaders. But that wasn’t good enough. After all, the police are continuing to beat, abduct, and torture protestors, killing three people so far.

Of course, the opposition is not entirely angelic either, with some genuine fascists elements lurking in the crowds. As with any mass movement, it’s a mixed bag. “A Ukrainian specialist on the European far right, Anton Shekhovtsov, who was there during the recent protests, says that while there is a real neo-Nazi and hooligan fringe, especially in a group called White Hammer, most of the so-called Right Sector activists see themselves as national revolutionaries fighting for independence from Russia,” writes Timothy Garton Ash in The Guardian. In the wild East, as opposed to the wild West, the guys in white are decidedly not the good guys.

Having practically written off Yanukovych after he rejected a cooperation deal in favor of closer economic ties with Moscow, the EU is trying again. Together with the United States, the EU is mulling over a variety of different options to stabilize the Ukrainian economy and prevent the eastern border areas of Europe from spiraling into chaos. With all eyes on the Sochi Olympics, Russian President Vladimir Putin might be in a conciliatory mood. The EU, the Yanukovych government, and the protestors in Kiev have until February 23 — the end of the Olympics — to push through a deal while the world is watching the peaceable version of Rollerball and Putin is smiling for the cameras.

It’s very difficult to reduce these color wars to the simple black and white. The red shirts support more egalitarian politics and economics, but there is a taint of corruption to their enterprise; the yellow shirts are courageous street fighters, but they aren’t particularly democratic. In Ukraine, what had once been a unifying orange has become a muddle of ethnic and linguistic divisions, corrupt domestic politics, and geopolitical intrigue. In the United States, the politics of purple that Obama promised has given way to an even more polarized standoff between the red state (of mind) and the blue state (of mind), though the libertarian reds often seem quite bluish in their foreign policy and the dwindling bloc of blue dogs have quite a reddish tinge to their fur.

We complain that Twitter has reduced our discourse to a mere 140 characters. But colors can be even more telegraphic in their meaning. The combatants in the color wars defend their hues against the possible pollution of the palette. “When you’re a Green,” as the song goes, “you’re a Green all the way: from your first cigarette to your last dyin’ day.” Colors are powerful precisely because they package meaning so succinctly. Not surprisingly, corporations have been trying to cash in on the potential of color for brand loyalty: T-Mobile “owns” magenta, while UPS is attempting to corner brown. In a future remake of Rollerball — which will remove the bad taste in the mouth created by the pallid 2002 version with LL Cool J — Magenta will crush Brown, sending the losers to the hospital or the morgue and revealing the true hidden costs of corporate downsizing.

The clash of colors in the corporate and political worlds has many people reaching for the rainbow in response: why can’t we all just get along? There’s another possibility. You can opt out of the color wars altogether and put out your own flag, a white sheet, which could symbolize neutrality or peace or surrender, or all of the colors of the rainbow combined.

Me, I still have a soft spot for Green….