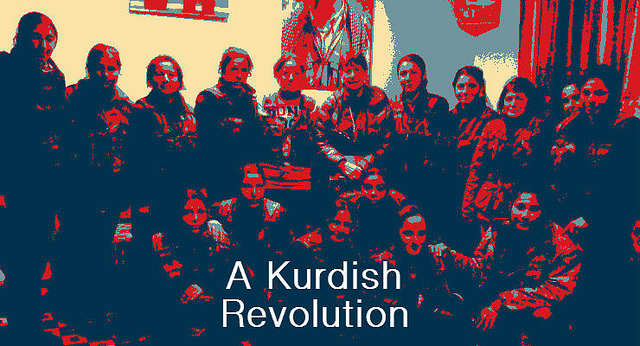 The Confederalists: A Kurdish Movement Bolsters Women and Bashes the West

The flip side to the Islamic State's brutal invasions has been a trans-border unification of Kurdish fighters and refugees.
By Michael Quinones | February 6, 2015

Cross-posted from The New Context.

“While the world is discussing what to do with ISIS, Kurdish women are doing it,” Dilar Dirik cried in a September 2014 speech about theories of statelessness at a European conference. Dirik, a PhD candidate at Cambridge, used the speech to give a voice to the embattled Kurds and remarkable Kurdish women, and denounce the Western nation-state. During the last week of January 2015, armed Kurdish groups declared victory over the Islamic State in Kobani, on the Syria-Turkey border. But Dirik spoke back when the city of Kobani was under siege by IS and Western powers were not yet engaged in the fight.

She pointed out how (in Jan. 2014) the international order was meeting in Geneva to discuss IS and Syria, but Syria’s primary Kurdish power the Democratic Union Party (PYD)—who had been fighting the IS for months—were not represented at the meeting. Instead, that same week, Syrian Kurds in the northeast Rojava region established three autonomous cantons (the towns of Efrin, Cizre and Kobani with their Arab and Christian communities), with a charter of democratic self-rule and policies for women’s equality. As Dirik, an outspoken activist in the Kurdish women’s movement, said, this was symbolic of the failure of the state system and the inspiration for a grassroots alternative. While Western powers dithered and debated geopolitics, multistate Kurdish militias were fighting and dying to save Yezidis on Mount Sinjar and to defend Kobani. These peshmergas, made up of PYD’s armed wing (YPG) and diaspora volunteers—supported by the powerful Kurdistan Workers’ Party (PKK)—had women’s battalions (YPJ), which raised the visibility of the battle and enhanced the Kurdish national image in the West. In the clearest of contrasts, the IS has been enslaving Yezidi women and promoting a patriarchy in extremis.

As many Kurdish writers, particularly those at Kurdishquestion.com, have pointed out, the Western media focus on Kobani and the Kurdish  “young women with big guns” hides a unique political experiment with a socialist-based ideology, drawn partly from the PKK and it’s founder Abdullah Öcalan, and called “democratic confederalism.” So the PYD/PKK and the Islamic State, who declared a caliphate in parts of Iraq and Syria, each have their own border-erasing theories and practices. The flip side to the Islamic State’s brutal invasions has been a transborder unification of Kurdish fighters and refugees.

The resistance of Kobanî is based on a rooted tradition and did not appear out of nowhere. The fighters emphasize that it is the philosophy of the PKK that motivates their struggle. When liberating Kobanî, the fighters immediately chanted “Bijî Serok Apo” – Long live Apo (Abdullah Öcalan, the PKK’s imprisoned ideological representative).

The symbolic and active leader of the PKK, Öcalan—while imprisoned off the coast of Turkey since 1999—is still the lead negotiator of the two-year-old Solution Process for peace with the government in Ankara. He has been pushing this political philosophy in lieu of Kurdish independence. Waging war against the Turkish state since 1984 but also against all rival Kurdish groups, Öcalan is likely responsible for the death of more Kurds than any other person or group, excluding the Turkish military. A Stalin-esque leader who consolidated power through the 80s and 90s by executing dissenters and shaming (if not killing) his top commanders, he is widely revered as the embodiment of the Kurdish national struggle, his face adorning flag and billboard, and can speak no wrong to his followers. Analyzing the man and his messages for years while far away from the frontlines, many Kurdish-Americans still active in the nationalist struggle have grown wary of him. One Kurdish-American man I spoke to who visits Southeast Turkey often suggested Öcalan had been a puppet of Turkish intelligence for years.

In Aliza Marcus’s detailed account of the PKK’s history, Blood and Belief (2014), she describes how after a few weeks in Turkish military custody, Öcalan began praising the Turkish state and saying violence wasn’t the way. He even convinced many of his comrades to turn themselves in to Ankara. Amazingly his grip on the PKK holds today, with the help of executed defectors and critics. Some former members have claimed that killings and attempted murders of PKK critics were ongoing as recently as 2009. Taking pains not to demonize Öcalan and present an objective recital of his murderous and diabolical rise to power, Marcus’s story stems from testimony of those high in the PKK ranks who became disillusioned. It wasn’t the megalomania, paranoia and murder that bothered them, it was his counterproductive fighting tactics, his removal of the PKK’s most effective lieutenants and his newfound diplomatic tone post-capture. Those who had seen comrades, brothers and sisters slaughtered after a life of hard-living in the mountains as a means to Kurdish liberation had been aghast at Öcalan’s turnabout after 1999’s capture.

It had been the commitment to violence and a bitter fight that made the PKK the powerful and still-dominant group it is today. Öcalan, who since March 2013 has been engaged in a “Solution Process” with Turkey’s reigning political leader, Recep Tayyip Erdogan, has written about the error of his violent methods. Before the negotiated ceasefire with the Turkish government, his focus was defining a post-state movement in Rojava:

Öcalan adopted a form of libertarian socialism so obscure that few anarchists have even heard of it: [Murray] Bookchin’s libertarian municipalism. Öcalan further modified, rarefied and rebranded Bookchin’s vision as “democratic confederalism,” with the consequence that the Group of Communities in Kurdistan (Koma Civakên Kurdistan or KCK), the PKK’s territorial experiment in a free and directly democratic society, has largely been kept a secret from the vast majority of anarchists, let alone the general public.

[Janet Biehl, Bookchin’s widow, is one of the few western anarchists to study the KCK on the ground, and has written extensively about her experiences on the New Compass website.]

In her speech at the New World Summit in September, Dilar Dirik refers to Öcalan proudly as the definer of democratic confederalism. However, crucially, she makes it clear that its legitimacy lies in structure of the Rojava communities created along with the disintegration of Iraq and Syria. She does not revere Öcalan, but he can be used a rallying cry, a symbol for an ideological solution to Kurdish statelessness, to inspire fighters and to embody a nationalist turned socialist movement. She frequently implies that the movement is much more than the man.

Dirik can hardly contain her anger at the Western powers for their complacency as the IS attacked Kobani and admits so during her presentation. She uses Öcalan’s preachings to attack capitalism and the patriarchy of the nation-state. And she defends the PKK (designated terrorists by the U.S. and Turkey) :

In other words, the strongest enemies of ISIS are internationally labeled as terrorist, just like the rapist, fascist jihadist murderers. Similarly, everyone is trying to instrumentalise the suffering of the Yezidi people from Mount Sinjar (Shengal) for their own interests, but the thousands of Yezidi refugees in the Rojava state that the international community is doing nothing for them, while it was the YPG/YPJ and PKK that have rescued them in August and looked after them ever since, in spite of the embargo on Rojava and the war in Kobanî.

More importantly, she is claiming this theory and movement to empower women and to undergird and promote Kurdish autonomy at a time when Kurdish fighters of both sexes shine in the global spotlight as heroes for defending Kobani and moving toward Mosul.