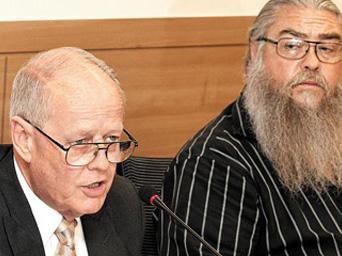 Phil Steward (left) and Steve House offer their testimony at a National Assembly hearing in Seoul on Monday on the use of Agent Orange at American military bases in Korea. Photo courtesy of Yonhap

Allegations of Agent Orange use are rekindling the anti-base movements in South Korea and Japan.
By Ikhwan Kim | September 23, 2011 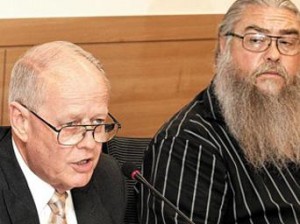 Phil Steward (left) and Steve House offer their testimony at a National Assembly hearing in Seoul on Monday on the use of Agent Orange at American military bases in Korea. Photo courtesy of Yonhap

Agent Orange, the notoriously toxic defoliant first used by U.S. troops during the Vietnam War, has long been known to cause liver cancer, birth defects, leukemia, and other illnesses in people exposed to it. Although the U.S. military hasn’t actively used the chemical since the 1970s, a number of forgotten victims are still suffering the nightmare of its contamination.

Forty years after the Vietnam War, South Korea and Japan have been rocked by allegations about the use of the chemical on U.S. bases. A series of recent confessions by U.S. veterans has lent credibility to the allegation that a considerable amount of Agent Orange was illegitimately used and buried in both South Korean and Japanese soil.

South Korea and Japan are thousands of kilometers away from Vietnam, and neither country has any jungle within its territory. This makes it hard to fathom why the chemical might have been used.

The issue of pollution around U.S. bases has been raised repeatedly in each country over the last two decades. But in the context of the U.S. military’s grand realignment in East Asia, the resurfacing of the Agent Orange issue may precipitate another huge backlash against U.S. presence in the region.

The contentious Agent Orange issue came to the surface in South Korea in May, after three U.S. veterans – Robert Travis, Richard Cramer, and Steven House – testified that they had buried hundreds of barrels of highly toxic chemicals, including Agent Orange, at Camp Carroll, South Korea in 1978.

Buoyed by a surge of public outrage, a wide range of environment organizations, anti-base groups, and national NGOs converged into a chorus of voices calling for a thorough investigation into the allegation.

In the midst of a joint U.S.-ROK investigation, Steven House and another veteran, Phil Steward, paid a visit to South Korea. Over the course of six days, they held meetings with national activists and with members of the National Assembly, mostly from opposition parties. Standing before the National Assembly on August 1, the two veterans gave sworn testimony about the burial of Agent Orange at the base, strongly urging both the U.S. and South Korean governments not only to investigate thoroughly but also to address the fallout of any contamination.

The interim report of the joint investigation, according to The Hankyoreh, tentatively concluded that nothing related to Agent Orange had been detected, even though underground water within the base is contaminated with Tetrachloroethylene (PCE) 50 times above its standard level. Tetrachloroethylene is a widely known carcinogen.

Nonetheless, the findings have attested to widespread concerns over the U.S. base pollution issue. Jung In-Chul, director of Green Korea United, told The Hankyoreh, “It has been again confirmed that Camp Carroll is polluted with other toxic chemical substances, even excluding Agent Orange.”

The South Korean government recently launched another investigation to ease the concerns of nearby villagers who worry they may have been exposed to Agent Orange. Reportedly, the health survey is going to be conducted among those who live within one kilometer of Camp Carroll. According to a Ministry of the Environment official, the government is expecting that more than 3,000 people will participate in the survey and that it will last through the end of the year.

Despite the efforts of both central and municipal governments, the fear of Agent Orange will not likely disappear unless results from both the joint investigation and the health survey show concretely that there is no threat.

South Korea’s neighbor Japan has also been grappling with a similar confession from a U.S. veteran. Japan is another invaluable part of the U.S. strategy to strengthen its military presence across Northeast Asia, as well as in East Asia as a whole. However, the recent allegation will add considerable fuel to the anti-base movement in Japan. According to the soldier’s claim, the U.S. military dug a large pit and buried dozens of barrels of Agent Orange in an area around the town of Chatan on the island of Okinawa.

Similar allegations have been raised over the years, but the Pentagon has thoroughly denied any use or storage of Agent Orange at U.S. bases in Japan. The story of Agent Orange in Japan hit the wall after a series of other U.S. veterans confessed to what they saw and did while they were stationed in Japan in the past. According to the testimonies of a dozen U.S. veterans garnered by The Japan Times, the U.S. military “stored, sprayed and transported Agent Orange on nine U.S. military installations on Okinawa between the mid-1960s and 1975,” which stands in stark contrast to the denials of the Pentagon.

All of the veterans who testified about the use of Agent Orange are suffering various illnesses commonly caused by exposure to dioxin. These former soldiers made a brave and audacious step toward revealing a truth that the U.S. military has constantly denied and abused regarding its bases abroad.

Although South Korea and Japan each have anti-base movements as old as the presence of U.S. forces, these movements have historically struggled to mobilize significant public support outside those residents directly affected by the bases. Problems related to U.S. bases, such as crime, noise, and environmental pollution, are almost always raised by local groups inside the host country.

However, the testimonies of U.S. veterans – coming from the servicemen themselves, rather than from marginalized local groups – have injected new energy into the anti-base movements in both countries. With the allegations coming amid a regional realignment of U.S. forces in full swing, the general public in both South Korea and Japan seems to be paying unusually close attention to the U.S. bases on their soil.

Given the sensitivity of current Japan-U.S. relations over Okinawa, the allegations regarding Agent Orange will become a new obstacle to realigning the U.S. forces stationed there. Both governments will face a strong backlash from people in Okinawa, which will not subside until a thorough investigation is conducted.

Furthermore, the anti-base movements in each country may be converging into a regional, transnational movement against the U.S. presence in Northeast Asia. Although no evidence of Agent Orange has been detected at the U.S. base in South Korea – and despite the fact that Japan has yet to undertake any investigation at all – the recent uproar has given activists and residents from both countries a chance to share their common concerns, particularly over environmental contamination. Although it is too early to determine definitively whether U.S. forces illegally buried Agent Orange and concealed what they did, the fact that both nations now feel to some extent victimized by Agent Orange could encourage a coordinated response from South Korea and Japan.

Implications for the U.S. Realignment

Despite the recent widespread concerns over the environmental contamination of U.S. base sites, neither the South Korean nor the Japanese government will readily dismiss the U.S. forces within their territories. The presence of U.S. forces has largely served the two countries’ interests by functioning as a guarantor of regional stability.

However, the newly reignited distrust of U.S. bases will persistently dog U.S. planners in the region. The realignment of US troops, which entails both the shutting down and expanding of various U.S. bases, will be put into question. Therefore, both the United States and its allies must launch a thorough environmental assessment along with the greater realignment. Otherwise, the old logic of hosting US forces to strengthen national security will no longer carry weight and will eventually be overtaken by the anxiety over environmental contamination.

The incident is also likely to raise calls for revising the SOFAs (status of forces agreements) in both countries. The SOFA between the United States and South Korea, for instance, stipulates that U.S. bases in South Korea must comply with South Korean environmental standards, according to a provision added in 2001. But the new clause doesn’t obligate the polluter to pay for the cost of clean-up and restricts Korea’s right to investigate the problem.

The Pentagon’s new scheme to realign its troops in Northeast Asia has already begun. But what Washington seems to be missing is any regard for the host nations’ public sentiments. Although ordinary citizens understand the Pentagon’s desire to prepare a new military architecture in anticipation of certain regional challenges, they will not forever accept a system that threatens their communities and poisons their environment.

Ikhwan KimIkhwan Kim is a contributor to Foreign Policy In Focus.