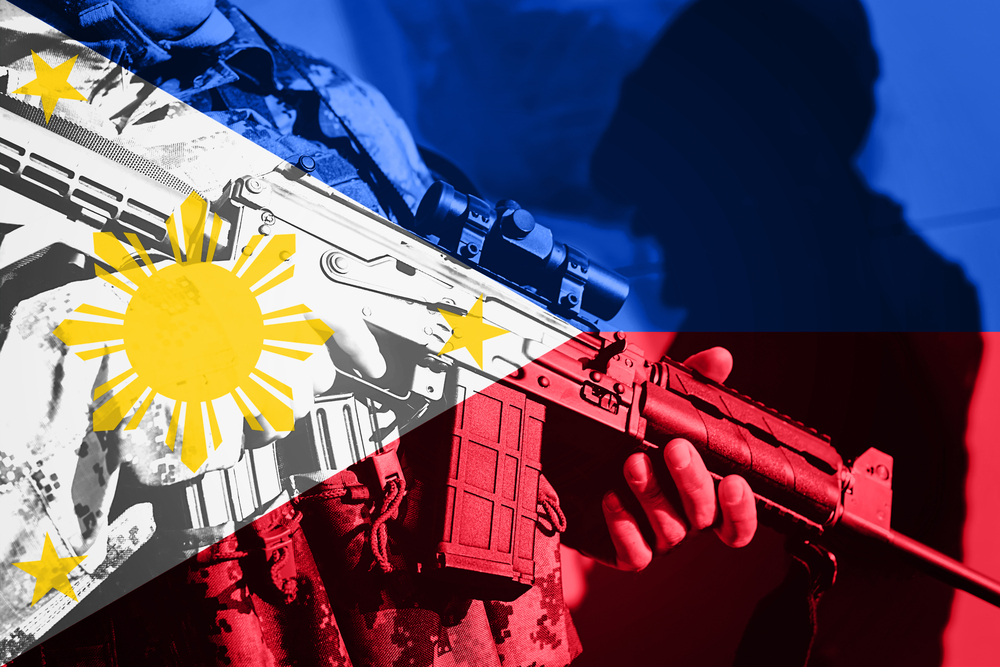 U.S. military aid to the Philippines doesn't defend the country from invaders. It's turned inward, against the poor, journalists, and human rights defenders.
By Drew Elizarde-Miller, Azadeh Shahshahani | June 3, 2019

Election meddling has raised increasing alarm in U.S. politics since the election of Trump. Now, the same question racks the Philippines.

Recently, in a wash of election fraud, candidates backed by Philippine President Rodrigo Duterte swept the country’s Senate — including Ronald “Bato” Dela Rosa, former police chief and architect of Duterte’s drug war. Strangely, now that Duterte has seized control over every branch of government, he’s also become increasingly absent, resurfacing questions of his health and stability to be president.

But if there’s one thing that’s clear from this election, it’s this: Duterte’s administration has proved itself violent and corrupt once again, worsening a human rights record whose severity has long merited an end of U.S. support.

On top of rampant vote-buying, evidence of dramatically increased voter fraud and suppression is mounting. Over 10 times the number of vote counting machines malfunctioned during this election compared to 2016. Voters who selected opposition candidates discovered that their voter receipts showed that their votes had been tallied for Duterte’s slate instead. Some ballots allegedly omitted progressive party lists altogether, while viral social media posts falsely claimed that these had been “disqualified” for “destabilizing the government.”

After publicly reporting 0.4 percent of precincts’ results, the election commission’s servers suddenly shut down for seven hours. When they went back online, over 90 percent of results were in, proclaiming that Duterte’s picks had won the Upper House. For his part, Duterte made a mockery of democracy, commenting that vote-buying is “integral” and “there’s no one who doesn’t buy votes.”

Then there’s the intimidation by the Philippine armed forces, who increasingly function as Duterte’s goons — not only through his infamous “drug war,” but during the elections too. In Manila, uniformed police distributed propaganda newsletters maligning and red-baiting progressive candidates, a McCarthy-era tactic used not only to intimidate, but to target and kill activists. Across the country, volunteers for the progressive Makabayan bloc received death threats and voters were intimidated through misinformation.

Overseas, millions of overseas Filipinos have been disenfranchised, and their votes left uncounted. One voter, Dominico Vega, who has been organizing students at California State University Northridge to lobby for a congressional hearing on the Philippines, expressed: “The Philippines can feel so far from the San Fernando Valley, but when friends and family become victims of Duterte’s human rights abuses, it hits close to home. Elections should not silence us.”

Vega is right in his call for a congressional hearing on the Philippines: U.S. support has been critical to the rise of Duterte’s military and police.

Duterte’s regime is the largest recipient of U.S. military aid in East and Southeast Asia. In 2018, the U.S. sent over $193.5 million in military aid to the Philippine military and police, not including arms sales, and donated equipment of unreported value. The U.S. helped inaugurate Duterte’s drug war, which has now claimed as many as 27,000 lives, by giving the police $32 million for equipment and training in “policing standards” — clearly detrimental when it comes to human rights.

Less publicized in the U.S., Duterte has imposed martial law on the island of Mindanao since 2017. Increased militarization and bombings there, backed by U.S. drones, advisors, and special forces, have caused the displacement of some 450,000 civilians. Philippine soldiers and paramilitaries are meanwhile committing atrocities against indigenous communities who oppose the encroachments of logging and mining conglomerates.

U.S. military aid, often through secretive and unaccountable conduits in the name of the War on Terror, is only making this internal conflict and the overall human rights crisis worse. U.S. military aid does not serve to defend the Philippines against invaders — rather, it is being turned against the vulnerable and marginalized, the journalists and human rights defenders, the dissenters.

History has shown that when the U.S. has made geopolitical calculations at the expense of people’s human rights, that has only fomented insecurity in the form of utter collapse. As the biggest military power around the globe by far, the U.S. should prioritize stopping support to Duterte. An overblown military presence in Asia Pacific only invites an arms race with China. We must stop relying on militarization to ensure security.

Last month, the San Francisco Board of Supervisors condemned Duterte’s human rights abuses and called for a congressional hearing on the U.S. funds fueling the violations, responding to the concerns of Filipino residents in the Bay area. Other U.S. cities should do the same.

But most of all, in solidarity with movements for democracy, human rights, and social justice in the Philippines, Congress must exercise its full powers of oversight to end the military aid and arms sales to Duterte’s regime.

Drew Elizarde-Miller is the National Coordinator of the U.S. Chapter of the International Coalition for Human Rights in the Philippines. Azadeh Shahshahani is Legal & Advocacy Director at Project South and a past president of the National Lawyers Guild; she tweets @ashahshahani.