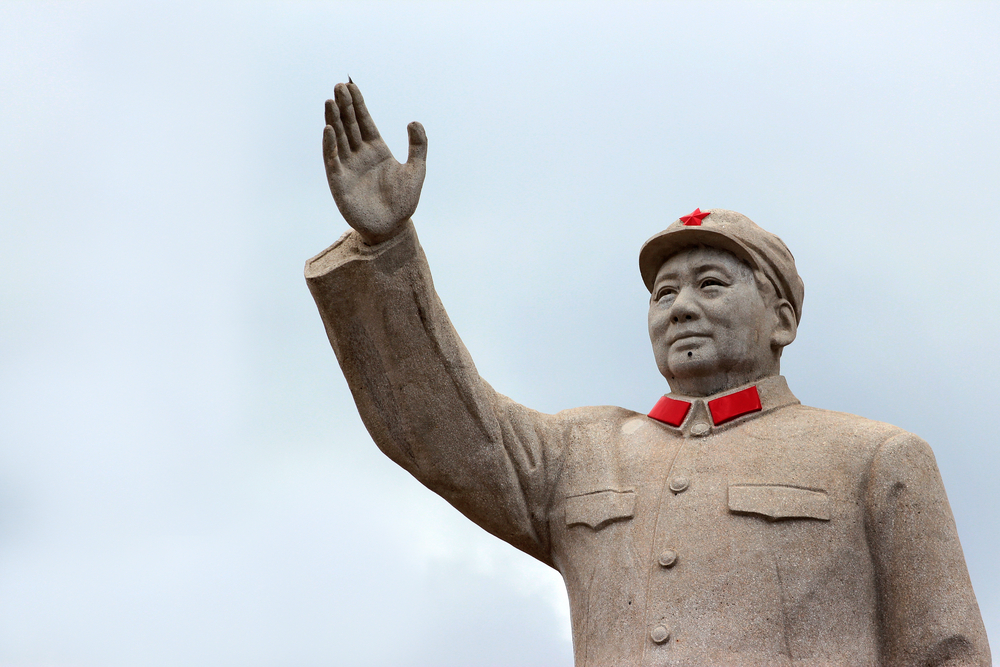 Right-wing “intellectuals” uncomfortable with the Black Lives Matter movement have latched onto a dubious historical analogy.
By John Feffer | June 17, 2020

In their effort to transform their discomfort with the current #BlackLivesMatter protests into a superficially sophisticated critique, right-wing “intellectuals” in the United States and Europe have latched onto a dubious historical analogy.

When former congressman Newt Gingrich, the National Review’s David Harsanyi, Breitbart’s Joel Pollak, and other right-wingers look at the protests against police violence, they see the Cultural Revolution.

The Cultural Revolution, which lasted from 1966 to 1976, turned China upside down. Initially instigated by Mao Zedong to outflank his more liberal opponents, the Cultural Revolution drew millions of young people into a bewildering assortment of Red Guard factions that purged “reactionary” elements from institutions, destroyed irreplaceable historical treasures, and even fought pitched battles against each other. As Mao quickly lost control over the movement, the Red Guards threw China into such chaos that even the country’s nuclear weapons complex was at risk.

The Cultural Revolution lasted a decade, resulted in at least a million deaths, and led to the destruction, in Beijing alone, of nearly 5,000 of the city’s 6,800 officially designated sites of historical interest.

Keep that in mind as you read what Joel Pollak, an editor-at-large at Breitbart, has to say:

Black Lives Matter” has become America’s version of China’s Cultural Revolution — a radical, youth-led purge of the vestiges of traditional culture and authority within a one-party state.

In this case, the one-party system is the “blue archipelago” of Democrat-run cities, most of which have not had Republican leaders for decades, and likely never will again.

The most striking similarity between the two movements is the ritual humiliation of individuals seen to represent “the system.” Mobs of demonstrators have marched up to police and demanded that they kneel with them, or to them. Some officers, in a bid to defuse tensions, have obliged.

What a fascinating set of comparisons.

Only a white conservative born in South Africa would equate the traditional culture of ancient temples with statues of white racists. The United States is a one-party state, oops, can’t say that, since the Republicans control the executive and the Senate, so Pollak immediately pivots to something very different, a “blue archipelago” of cities, even though #BlackLivesMatter protests took place in plenty of “red archipelago” towns and cities as well: Wilmington (North Carolina), Odessa (Texas), Grand Island (Nebraska), and dozens of other places that voted for Trump and have sent Republicans to Congress.

And now for the only concrete comparison, which revolves around ritual humiliation. The Red Guards put dunce caps on their professors and leading cultural figures and forced them to engage in self-criticism sessions. It was quite easy to do that, since the Red Guards had larger numbers and sometimes weapons as well and their opponents were unarmed. Today’s protestors, meanwhile, are the unarmed ones, and they face the armed representatives of the state, who don’t have to defer to the protestors if they don’t want to.

No one has placed dunce caps on their heads. When they kneel, they do so out of actual solidarity, which probably troubles Pollak a good deal more than the imaginary humiliation, or else in a cynical play for the cameras.

If it were just one crazy Breitbart writer, it would be easy to dismiss the violence that Pollak has committed against the art of analogy. But various conservatives, libertarians, and even a “libertarian Marxist” have seized on the Cultural Revolution analogy — probably because they believe that any associations with China are by definition bad and no one really understands references to Jacobins and the French Revolution any more.

The Cultural Revolution comparisons usually fall into two categories. In the first, the analogists want to demonstrate that the current protestors aspire to expunge the past. In the second, they want to prove that the protestors aim to prohibit free speech.

In the bizarre UK magazine Spiked!, the editor and former Trotskyist Brendan O’Neill lays out the first kind of comparison:

Britain is in the throes of a Cultural Revolution. Statues are being tumbled, past art erased, people cancelled. Wide-eyed Woke Guards, heirs to Maoist-style intolerance, are compiling lists of monuments to target and individuals to humiliate. They are remorseless. Nothing old that runs counter to their newthink can be tolerated. Tear it all down.

Sounds pretty scary. What’s actually happened is that protestors have dumped one statue — of slave trader Edward Colston — into the drink and spray-painted “racist” on a statue of Winston Churchill. The UK is now having a discussion about history and how to commemorate it. That’s not exactly Cultural Revolution-style anarchy. Rather, it’s a rather commonplace occurrence.

Even the statue-toppling is more common than O’Neill suggests. It’s not like Stalin statues still look down on people throughout Eastern Europe. Statues of ruthless colonial oppressors were pulled down throughout Africa as part of the independence process. Oh, and what about Ozymandias, the once powerful King of Kings that the poet Shelley discovered as just a pair of legs in the sand?

In the second category, the analogists are particularly exercised by The New York Times backtracking on a Tom Cotton op-ed it published on June 3. In “Send in the Troops,” Senator Cotton (R-AR) urged the use of the U.S. military to quell the unrest surrounding the #BlackLivesMatter protests.

“What you are seeing is Maoism, people who are supposed to be in public confess that they’ve been guilty, people who have to toe whatever the party line is,” opined Newt Gingrich on Fox News. “When we see an institution as famous and as powerful as The New York Times collapse totally in front of the mob, it tells you what’s going on in terms of American elites.”

The mob? The New York Times made its decision to retract Cotton’s op-ed because, first, it contained factual inaccuracies and language unbefitting The Gray Lady’s editorial page. Second, it received pushback from its own staff.

The editors concluded, “the editing process was rushed and flawed, and senior editors were not sufficiently involved. While Senator Cotton and his staff cooperated fully in our editing process, the Op-Ed should have been subject to further substantial revisions — as is frequently the case with such essays — or rejected.”

And unlike Maoist China, the Times published several pieces — by Brett Stephens and Ross Douthat — that supported the publication of Cotton’s op-ed.

None of that has stopped the National Review’s David Harsanyi from concluding during the Cotton affair that “we’re in the dawn of a high-tech, bloodless Cultural Revolution; one that relies on intimidation, public shaming, and economic ruin to dictate what words and ideas are permissible in the public square.”

Now, if Harsanyi were talking about the impact of the Koch brothers on public debate in the United States — trying to intimidate and publicly shame money in politics journalist Jane Mayer in an attempt to stop her investigations, spending millions of dollars to dictate acceptable discourse — then maybe he’d be on to something.

Which leads us to a much more apt Cultural Revolution analogy.

A powerful leader appeals to a group of crazy, gun-toting followers to go after his political opponents. He pits the anarchy of the mob against the level-headed policies of experts and sensible politicians.

When militia members showed up outside state capitols and the houses of governors to protest stay-at-home measures, the solidly Republican head of the National Association of Manufacturers called them “IDIOTS.” In a video call, Jay Timmons continued, “These people are standing so close together without any protection — with children, for God’s sakes. And they have no concern, and it’s all about them, and it’s all about what they want.”

Donald Trump, on the other hand, was enthusiastic about the protests. He called on his followers to “liberate” Virginia, Michigan, and Minnesota. For Virginians, he had an extra message: “save your great 2nd Amendment. It is under siege!” The Second Amendment pertains to the right to keep and bear arms.

When the protests in the wake of George Floyd’s death overwhelmed the anti-quarantine actions, Trump displayed the other side of Mao by threatening to invoke the Insurrection Act and deploy the U.S. military to suppress the demonstrations. Tom Cotton’s vocal support for the action notwithstanding, Trump got serious pushback from former generals and active duty military. Thanks to Pentagon chief Mark Esper refusal to support Trump’s move, America was saved from a Tiananmen Square scenario.

Rebuffed, Trump has retreated to his previous position of backing America’s version of the Red Guard. Marjorie Taylor Greene is running for Congress in Georgia on the Republican Party ticket. If she wins — and she has a very good chance — she’ll be the first member of Congress to believe in the QAnon conspiracy (think: “deep state” times crazy). In June, she posted a video of herself wielding a semi-automatic and a message for “Antifa terrorists to stay the hell out of northwest Georgia.” Trump endorsed her and then congratulated her for winning the recent primary.

After The Washington Post recently published an unflattering profile of her, Greene tweeted, “The Chinese propagandists at the Washington Post are attacking me the same way they attack Donald Trump, and other conservatives.”

I always knew that the 2020 elections were going to feature some back and forth about China. But I never could have imagined Donald Trump as Mao teaming up with Republican wackos in the garb of the Red Guards to fight the reformers who are trying to save the country from a lacerating Cultural Revolution.

And conservative pundits have the gall to twist the very same analogy into a pretzel to throw against their enemies?

Only in Trump’s through-the-looking-glass America.