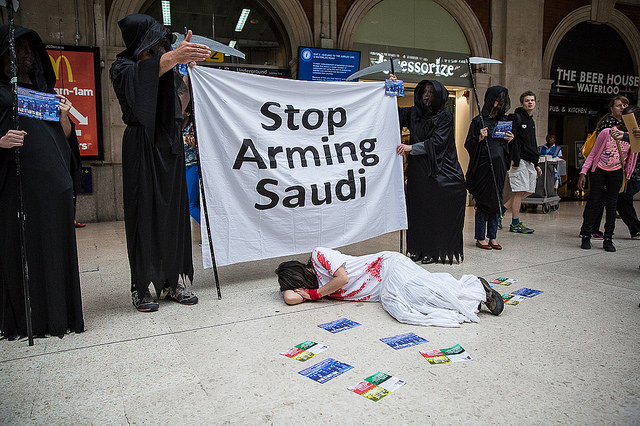 Contesting the U.S.-Saudi Bromance With 1,000 Cuts

There's a movement afoot in Congress to stop U.S. military support for the Saudi war in Yemen.
By Robert Naiman | September 19, 2016

A Senate vote on this resolution is currently expected this week, as early as Tuesday. A broad coalition of human rights and peace advocates, including Oxfam, Amnesty International, Human Rights Watch, the Friends Committee on National Legislation, and the Win Without War coalition (of which Just Foreign Policy is a member) is lobbying senators to vote in favor of the resolution of disapproval. Some of these groups sent a joint letter to Congress urging rejection of the arms deal.

These groups are united in their concern that the United States is supporting a war that has caused a humanitarian catastrophe in Yemen. Moreover, Human Rights Watch and Amnesty International have documented violations of U.S. arms export controls concerning the targeting of civilians and violations of international humanitarian law. The arms deal would, in part, replace Saudi tanks destroyed in the war in Yemen. But this vote is also happening in the context of other concerns about the U.S.-Saudi relationship, in particular, about Saudi Arabia’s support of anti-American extremism.

This vote is happening this week because of an important provision of the Arms Control Export Act (ACEA). The ACEA says not only that Congress can vote to disapprove an arms sale, but that a resolution to do so within 30 days of the administration’s notification to Congress cannot be buried in a hostile committee against the will of the resolution’s sponsors. If the sponsors insist—as Senators Paul and Murphy are now insisting—such a resolution is guaranteed a floor vote.

This provision of the AECA for privileged consideration of a resolution of disapproval of an arms deal is similar to the crucial provisions of the War Powers Resolution that aim to ensure that a resolution to withdraw U.S. forces from a conflict that Congress hasn’t authorized can’t be buried in committee.

The expected Senate vote is the third significant public engagement effort this year to challenge U.S. weapons exports to Saudi Arabia in Congress in the context of the war in Yemen. On June 16, the House of Representatives narrowly failed, 204-216, to pass an amendment offered by Rep. John Conyers (D-MI) to bar the transfer of U.S.-produced cluster bombs to Saudi Arabia. On August 30, during the congressional recess, 64 members of the House signed a bipartisan letter to the administration urging it to postpone the Saudi arms deal so that Congress could fully consider it.

Four Reasons for Working to Stop the Deal

Although fundamental reform in the U.S.-Saudi relationship is a desirable long-run goal, the priority now is to save lives and prevent much unnecessary suffering in Yemen. Not long ago, there was a ceasefire in Yemen. Though imperfect, the ceasefire resulted in less violence and more humanitarian aid was able to get through. Therefore, a completely different U.S.-Saudi relationship isn’t necessary in order to negotiate a life-saving cease-fire. In part because of the perception of congressional pressure, diplomatic and political talks are happening right now towards a political resolution in Yemen, and the U.S. diplomatic stance in these talks has moved from a total embrace of claimed Saudi interests towards a somewhat more realistic and balanced view. More congressional pressure could generate more effective U.S. diplomacy and a new ceasefire. And for many Yemenis, that could be the difference between life and death.

Second, fundamental reform in the U.S.-Saudi relationship will likely not be achieved with a single blow. The challenges include more than a half-century of bipartisan foreign policy inertia, the Pentagon-industrial-congressional complex, and the assumptions of bipartisan military Keynesianism. The status quo of the U.S.-Saudi relationship has many self-perceived beneficiaries. It will likely take many challenges to reform this relationship.

Third, it takes time to mobilize and engage public opinion in a new way. Peace advocates are used to the idea of opposing an authorization for the use of military force. They aren’t accustomed to the idea of opposing an arms deal on human rights and peace grounds. Each battle educates and engages more people; each partial success convinces more people that future and more vigorous efforts on this front are justified.

The more people win, the more they believe they can win. The more senators vote for the resolution of disapproval of the Saudi arms deal, the more controversial the Saudi war in Yemen—and the more controversial the U.S.-Saudi relationship in general—will appear to be in Congress. That will put more pressure on the administration and the Saudis to negotiate realistically for peace in Yemen. And that could save many lives.

The contested vote will also set a broader positive precedent. Constituents who care about peace and human rights will find out how their senators voted and will praise them or criticize them for it. That will change the perception among members of Congress that arms deals are the exclusive political turf of the Pentagon-industrial complex. In the future, there will be more congressional awareness that other interests, such as human rights and peace, have to be taken into account.