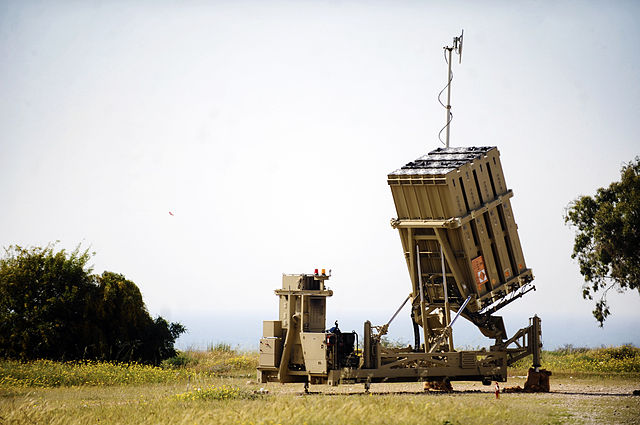 The Contrails Have It: Iron Dome Is a Dud

The effectiveness of missile defense can scarcely be inferred from the “sound and light show” that is Iron Dome.
By Russ Wellen | July 29, 2014

Contrails, the wake of an aircraft usually created by water vapor in its exhaust. When you hear them mentioned these days, it’s usually an attempt to paint them as “chemtrails,” the supposed product of a secret government program for spraying chemical or biological agents on the public to various ends. But contrails happen to be key to the effectiveness ― or lack thereof ― of Israel’s iron dome mobile missile defense program.

Before continuing, if you’re anything like me, you wonder how U.S. missile defense, which (a recent test notwithstanding), has underperformed, while its Israeli counterpart, Iron Dome, has proven successful in stopping rockets launched at it by Hamas and other extremists. First, it behooves us to remember that those are rockets, not ballistic missiles, launched at Israel. Second, where’s the evidence that Iron Dome works anyway? At the Bulletin of the Atomic Scientists, editor Jon Mecklin frames the question.

The New York Times … wrote that the Israeli Army contended Iron Dome “intercepted about 27 percent of all the rockets fired between Monday [July 7] night and midday Wednesday.” But the Times did not indicate how many missiles had been targeted, leaving the efficiency of the Iron Dome system in this conflict unclear, even as the newspaper reported that “Israel has said that the system has a success rate of nearly 90 percent in intercepting the missiles it is meant to thwart.”

In fact, writes Mecklin ― and here you’ll begin to see the importance of contrails to the argument

Ted Postol, an MIT-based missile defense expert and frequent Bulletin contributor, provided a dose of context to the Iron Dome coverage in a National Public Radio interview Wednesday. “We can tell, for sure, from video images and even photographs that the Iron Dome system is not working very well at all,” Postol said. “It—my guess is maybe [it hits a targeted missile] 5 percent of the time—could be even lower. … And when you look—what you can do in the daytime—you can see the smoky contrail of each Iron Dome interceptor, and you can see the Iron Domes trying to intercept the artillery rockets side on and from behind. In those geometries, the Iron Dome has no chance, for all practical purposes, of destroying the artillery rocket.”

Postol provides more detail in an MIT Technology Review piece titled An Explanation of the Evidence of Weaknesses in the Iron Dome Defense System.

I will show … that Iron Dome performance almost a year and a half later has probably not improved.

One of the most demanding problems in intercepting an artillery rocket is that the interceptor must destroy the warhead on the rocket. … Damaging the back end of the artillery rocket essentially has no effect on the outcome of the engagement.

Protecting a population spread over defended areas from the hazards of such missile attacks must involve protection against falling debris, which can cause serious injuries to individuals who are not in protective shelters.

Just by way of a reminder

Israel does in fact have an extremely effective missile defense. That defense is the early warning system that tells people on the ground a rocket is traveling in their direction, and the shelters that are arranged so that individuals can easily get to protection within tens of seconds of warning.

In the particular case of rocket attacks against Israel, the overwhelming number of artillery rocket warheads are in the 10- to 20-pound range, which makes the effectiveness of shelters even greater.

I will then present photographic evidence of contrails in the sky … from November 2012 and from July 2014 indicating that the Iron Domes are still behaving erratically—resulting in continued very low intercept rates.

Postol admits that he does not

… know why the Iron Domes were not engaging most artillery rockets using the proper front-on geometry. However, it is clear that the Iron Dome radar tracking and guidance system is not working, as it is initially sending Iron Dome interceptors to [the wrong] intercept points.

A winner of the Israel Defense Prize, Dr. Moti Shefer, has said that Israel is inserting “virtual” incoming Hamas rockets into operators’ radar screens in order to claim higher than warranted success rates.

“We’re shooting at ourselves, mainly virtually. The virtual rocket was invented in order to increase the vagueness surrounding Iron Dome. Assume that a real rocket arrives. What does the command and control system do? It creates nine more virtual rockets, and transmits their paths on computer graphics to the rocket launcher operators. The launcher operators see 10 rockets and launch 10 Iron Dome interceptors. People hear 10 booms, one rocket enters, and you get a 90% success rate.

“There is no missile in the world today able to intercept missiles or rockets. Iron Dome is a sound and light show that is intercepting only Israeli public opinion, and itself, of course. Actually, all the explosions you see in the sky are self explosions. No Iron Dome missile has ever collided with a single rocket.”

… noted that appraisals of Iron Dome should not be misinterpreted as vindication of defense systems that aim to protect against sophisticated, long-range missiles of the type designed to carry nuclear weapons. His analysis is worth quoting at length: “First, let’s debunk the myth that Iron Dome—even if as successful as advertised in the Gaza conflict—constitutes proof that missile defense, writ large, works. … Iron Dome is primarily a rocket defense system, and rockets are fundamentally different from missiles. Rockets do not have a guidance system; missiles do. Rockets follow a trajectory that is determined by the position and angle of the launcher and the propellant. … While destroying a rocket in this way is a great technical feat, it is not the ‘hit to kill’ system on which the US missile defense effort has been premised.”

It’s not just Israeli lives that are on the lives, but as David Axe writes at Reuters:

There is a lot of money — and credibility — invested in the system’s success.

Israel has so far purchased nine Iron Dome batteries from the manufacturer Rafael — and plans on buying several more. Each Iron Dome missile reportedly costs somewhere between $40,000and $100,000, compared to less than a $1,000 apiece for the militants’ Qassam rockets.