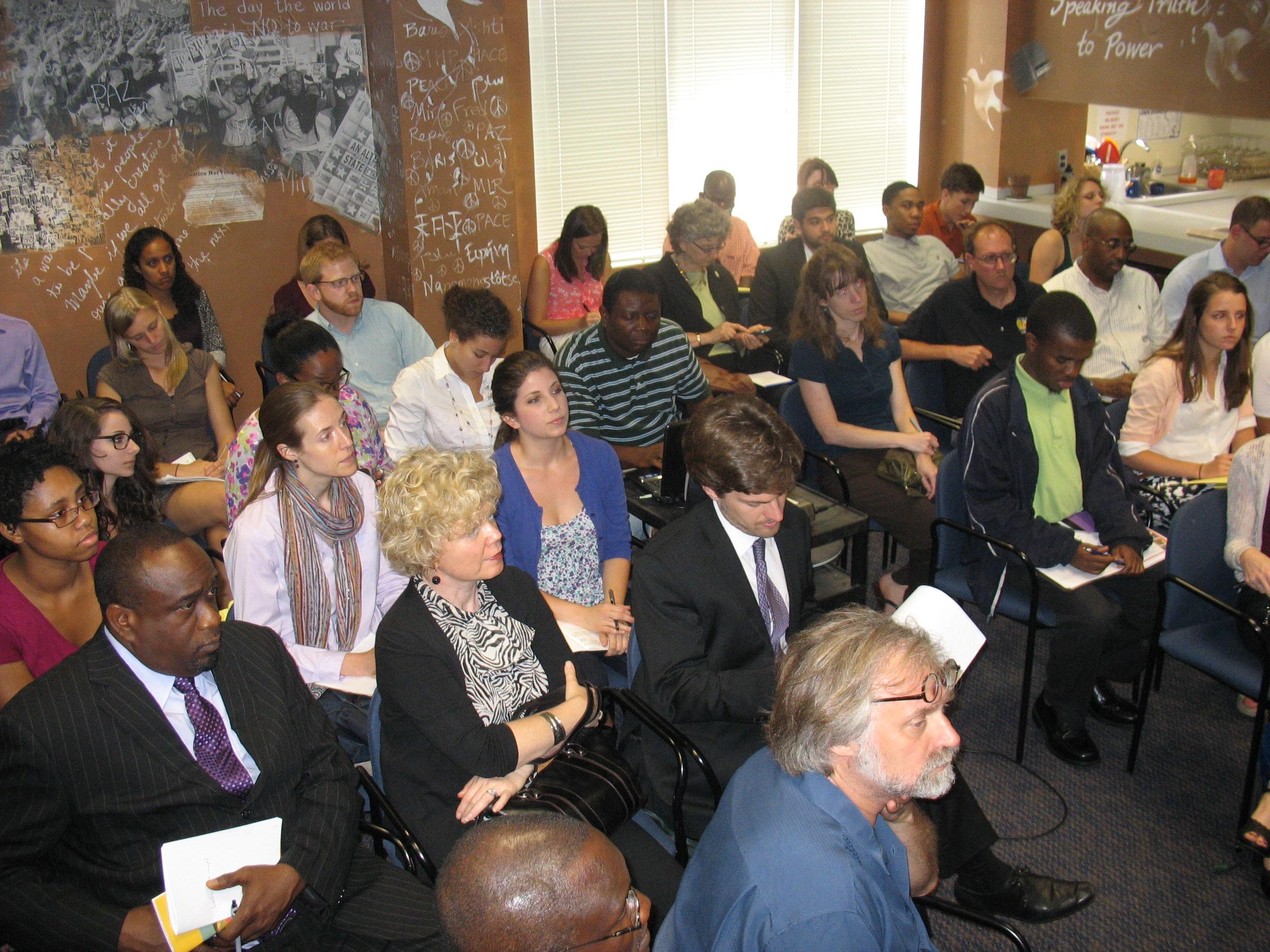 Corporate Accountability In Liberia Gets A Fresh Look

Ellen Johnson Sirleaf, Liberia’s first woman president, has been praised internationally for her efforts to address war crimes from the country’s civil war and for negotiating significant debt relief, even winning the Noble Peace Prize as a result. However, a briefing held last Thursday by IPS’ Foreign Policy in Focus coinciding with Sirleaf’s recent visit to the United States drew attention to areas that Sirleaf has failed to adequately address. The event was well attended, with more people than could fit into our conference room. During the briefing, two of Liberia’s most important civil society leaders discussed issues of land grabbing, corporate responsibility and worker rights in extractive industries. Alfred Brownell is an environmental justice lawyer with Green Advocates, a Liberian environmental justice advocacy organization. He noted that the level of foreign investment in Liberia is between 18 and 20 billion dollars, pointing out the dangers of relying so heavily on foreign investment when Liberia is still attempting to build its economic foundations in the wake of civil war. He also criticized continuing land grabs by foreign companies such as Sime Darby. While there has been some reimbursement for crops taken in these land grabs, the reimbursement is often far lower than the crops’ actual value. One difficulty that Liberians have faced is that often land claims are based on ancestral rights, and while the people know where their land’s boundaries are, they do not have deeds or leases to prove their ownership. When communities and environmental justice lawyer Brownell filed a complaint against Sime Darby on behalf of the local communities, Sirleaf told local communities and Brownell at a town hall meeting “When your government and the representatives sign any paper with a foreign country, the communities can’t change it. “You are trying to undermine your own government. You can’t do that. If you do so all the foreign investors coming to Liberia will close their businesses and leave, then Liberia will go back to the old days.” Brownell was followed by Edwin Cisco, General Secretary of the Firestone Agricultural Workers Union of Liberia (FAWUL). Firestone is Liberia’s largest producer of rubber, the country’s biggest export, and as such has significant economic and political power. Cisco commended Sirleaf for opening space for workers to advocate for their rights as equals with Firestone, which has led to positive changes including occupational health and safety advances such as establishing a safety department and a community relations committee. The company was pressured into building schools and the plantation is also officially rid of child labor — however, this does not extend all the way through Firestone’s supply chain. Despite progress, as it stands, Liberia’s labor law is centered around Firestone’s needs. Currently, a Decent Work bill is before the National Legislature and would improve working conditions and provide minimum wage standards and overtime regulations. Cisco highlighted the importance of pushing this bill forward and expanding protections to other industries.

Maybe the richest part of the event was the dynamic Q & A that followed. U.S. labor union representatives showed up to give support and learn a thing or two from Edwin Cisco and the Firestone Agricultural Worker’s Union of Liberia’s incredible successes. Liberian-Americans working for human rights and the environment added their voices and shared their visions of a peaceful, just, and representative Liberian leadership. There was tension in the room as the dialogue shifted from celebrating Sirleaf, particularly her support of workers rights, to keeping her accountable after her appointment of her third son and Senior Adviser as the chairman of the National Oil Company of Liberia. This tension reminded us that searching for black and white solutions to complex problems may feel easier and more satisfying, but that it is the if’s, and’s, but’s and also’s that really serve to provide solutions. Can we celebrate Africa’s first elected woman head of state and Nobel Peace Prize Laureate while raising concern at her appointment of her son to one of the most lucrative and influential positions in the country? Yes. Can we appreciate Sirleaf’s willingness to create space for trade unionists to advocate for their rights, leading to safer working conditions and better schools, while remembering that under her rule massive land grabs are taking place? Yes. Can we celebrate and gain energy from the successes along the way without forgetting all of the work yet to be done? We certainly hope so.