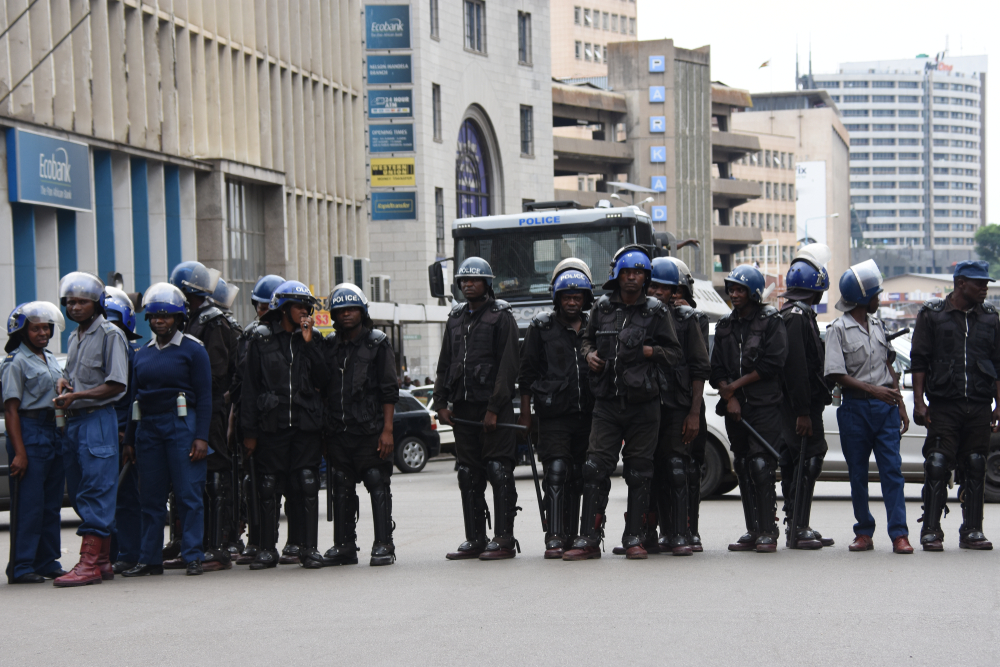 COVID-19, Hunger, and State Violence Are on the Rise in Zimbabwe

In post-coup Zimbabwe, COVID-19 cases are rising along with political repression. Here’s how you can help.
By Imani Countess | September 21, 2020

Africa reports 1.3 million positive COVID-19 cases, leading some health officials to consider that the continent may have escaped the worst of the coronavirus.

In Zimbabwe, the health ministry reports low levels of the virus, with cumulative reports of 7,400 positive cases and 218 deaths by early September. Yet local sources believe that the infection rate is significantly higher and rising. The country’s coronavirus lockdown and curfew have worsened an already weak economy, and Zimbabwe is facing what the UN calls “desperate levels of hunger” exacerbated by a long-running governance crisis.

South Africa has meanwhile recorded over 640,000 cases and over 15,000 cumulative deaths.  The South African government has taken aggressive steps, including announcing a National State of Disaster, enacting lockdown restrictions, and creating a $26 billion special coronavirus budget, which provided cash benefits to at least 37 percent of the population.

The millions of Zimbabwean migrant workers in South Africa’s informal economy, however, were ineligible for those benefits. Without work and no ability to access funds, many migrants have returned home, leading some Zimbabweans to believe that the influx of returning residents has increased infections, particularly in rural areas.

The Zimbabwe government requires returning migrants to quarantine in government-run facilities. Those centers, however, lack testing equipment, running water, and hygiene supplies, and many quarantined individuals have fled these conditions before completing their quarantine. An unknown number of migrants have also re-entered the country through unofficial entry points, bypassing quarantine facilities and likely facilitating the virus’ spread to families and rural communities.

Economic upheaval and the pandemic threaten the global economy, but Zimbabwe was in economic freefall before the virus hit. The country’s health sector is broken, inflation stands at 319 percent, and the UN Office for the Coordination of Humanitarian Affairs reports that drought, crop failures, and economic austerity are a daily challenge. “The delivery of health care, clean water and sanitation, and education has been constrained, and millions of people are facing challenges to access vital services,” the UN warns. Nearly half of the country faces severe food insecurity.

Since the 2017 military coup that removed President Robert Mugabe from office, attempts to shift to civilian-led government have failed. Instead, Mugabe’s successor, President Emmerson Mnangagwe, has consolidated and elevated a clique of military leaders, who have furthered the country’s decline.

Zimbabweans are frustrated with the country’s direction and rumors of a second coup abound, alongside calls from civil society, the labor federation, and progressive thought leaders for a transitional authority as the only way to prevent widespread violence.

There is no quick resolution for Zimbabwe’s dire situation. In the U.S., progressives are appropriately engaged in combating racist, right-wing authoritarian forces here. But can progressives, as one Washington, D.C.-based solidarity leader famously said, “walk and chew gum at the same time?” The fight for economic equality, shared prosperity, and dignity is global, and should be fought on multiple fronts. Zimbabwe needs urgent material aid and visible public support.

TrustAfrica, a Dakar-based 501(c)(3) philanthropy, serves as both fiscal manager and grants administrator for the Alliance. You can make a direct credit card donation to the ZimAlliance here.

Social media is also useful. According to one source, social media in Zimbabwe has flagged missing persons and ongoing abductions. The absence of immediate social media attention can lead to total disappearances or brutal murders that the state can simply deny any knowledge.