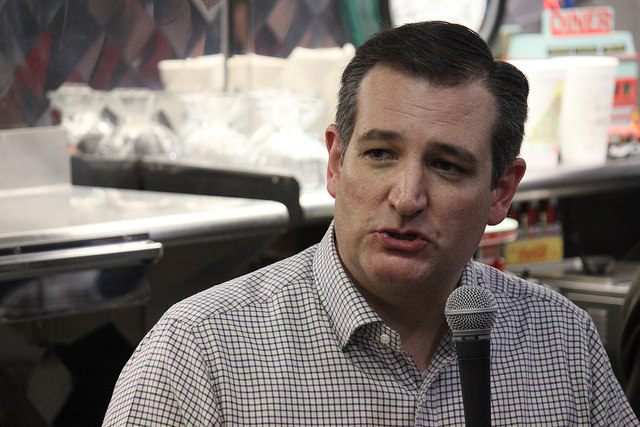 Republican presidential candidate Ted Cruz announced his team of foreign-policy advisors on Thursday, March 17 by saying, “After two terms of a failed Obama-Clinton foreign policy, our allies are confused and frightened, and our enemies are looking for opportunities.”

Never mind our allies, Americans — at least those who follow foreign policy — are confused and frightened by his team. The list includes the infamous Frank Gaffney, a number of people less well-known, and neocon Elliot Abrams, who was an adviser to former President George W. Bush.

Abrams, reports Eli Lake at BloombergView, responded to Cruz’s decision to neither support nor directly criticize fellow Republican presidential candidate Donald Trump’s call for a ban on Muslims entering the United States. Cruz instead introduced “a bill to halt refugees from countries with a significant al Qaeda or Islamic State presence, with exceptions for asylum seekers fleeing genocide.”

“When Donald Trump talked about barring all Muslims from entering into the United States, Senator Cruz of course did not endorse that opinion, in part because he knows the law,” Abrams said.

Abrams does make a modicum of sense at times. He, in Lake’s words, “helped craft Bush’s policy to empower moderate Muslims in the Middle East against radicals.”

“It’s now 15 years since 9/11, and I think it’s obvious that Muslim citizens in the U.S. and Muslim leaders abroad have an absolutely critical role to play in fighting jihadis and other Muslim extremists,” Abrams said. “This is partly a battle within Islam that they are going to have fight and win. Alienating these potential allies is the kind of foolish policy that the Obama administration has engaged in when it comes to Arab states that are our allies.”

It’s unclear how Abrams thinks President Obama alienated those “potential allies.” By intervening in the Libya, Syria, and Iraq, to whatever extent? That’s not very neocon-like. Whatever the case, Abrams is certainly moderate in comparison to the inflammatory Gaffney, whose views, reports Breitbart, were once “considered radioactive by the Republican establishment.” For instance, an Islamophobe, he believes that the United States is in danger of being ruled by sharia law.

Gaffney once actually said that

“… we need to establish a new and improved counterpart to the Cold War-era’s HUAC [House Un-American Activities Committee] and charge it with examining and rooting out anti-American – and anti-constitutional – activities that constitute an even more insidious peril than those pursued by communist Fifth Columnists fifty years ago.”

Oka-a-a-y, back away from the wingnut. Nothing to see here. Certainly, should Cruz somehow win the nomination, fodder for the Democratic candidate.