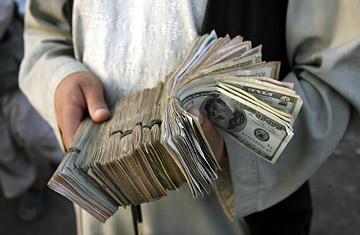 Afghanistan can't prosecute its way out of rampant corruption.
By Inge Fryklund | September 14, 2012 Governmental corruption is a huge issue in many of the countries that the United States seeks to influence. Afghanistan is only one of the more notable cases in which corruption is rampant. America has put millions into USAID and State Department projects designed to combat corruption, but there is very little to show for its efforts. To date, no high-level corruption prosecution has gone forward in Afghanistan.

Why are U.S. efforts to reduce corruption in Afghanistan and other places so unsuccessful? The United States is a well-developed economy with relatively minimal corruption. One would think that our experience can show the way to other countries. It can, but to date we have approached the problem backwards, in ways guaranteed to fail.

When Americans think of anti-corruption programs, they naturally think of prosecution. It seems obvious that detecting and prosecuting those who violate the public trust is the thing to do; it takes the bad actor out of play and deters those who may be similarly inclined.

However, we are not sufficiently aware of the political-cultural context in which prosecution proves useful. Preventing corruption—rather than prosecuting it after the fact—requires fine-tuned day-to-day mechanisms, and these we have developed over more than a century.

We have gradually constructed public systems that prevent most would-be criminals from acting on their desires. We have governmental systems incorporating checks and balances. We prevent the one-on-one citizen-civil servant transactions that offer space for bribes or extortion. A single line at a government office, for example, with each person going to the next available window, may look like good customer service, but it has the underlying purpose of ensuring that clerk-citizen interactions are randomly paired. (It is no surprise that in the United States, building code and health department inspections of restaurants are a common source of graft and extortion. These site visits take place out of public view.)

We are so cushioned by such arrangements that we never notice their ubiquity. (The fish, they say, are the last to discover water.) The threat of prosecution in the United States is for the handful of people who are determined to beat the odds stacked in favor of prevention.

When we go to other countries, we can be misled into applying Western approaches without realizing how context-dependent our tools are. In a country like Afghanistan that lacks all the everyday systems that we take for granted, prosecution is like bailing from a leaking boat. We can prosecute individuals just about indefinitely, but if there are no systemic checks put in place, new miscreants will always replace those who are removed. When prosecution is used as the first (or only) line of defense, the hapless citizen is no better off; he is at the mercy of the next predatory official. Asking President Karzai to prosecute government officials is not a systemic solution.

Corrupt governments are often enthusiastic about prosecution—as long as they can select which individuals are thrown to the wolves (typically internal competitors or someone not sharing kick-backs with higher-ups). There is similar enthusiasm for “anti-corruption commissions.” Western support for such institutions is puzzling. Such panels allow corrupt officials to pretend to virtue, give them cover to remove a few competitors, and allow corrupt business as usual to proceed. The citizen, of course, is the loser.

My approach in countries such as Afghanistan is to focus on systemic improvements—always labeling them “customer service” rather than “anti-corruption.” Reduce the number of signatures required to open a business. (Each signature represents an opportunity for extortion.) Eliminate opportunities for public employees to negotiate fees. The possibilities are unlimited. In Kabul several years ago, a USAID-funded land records project imaged property deeds so they could be retrieved in the records office within minutes. This replaced a system in which it could take two weeks to locate a paper record—during which time the public employee could transfer title to someone else. Just good customer service.

No single step is going to make a dramatic difference. Improvements in public accountability will accumulate slowly, but over time they can systematically reduce vulnerability to public corruption. Improvements create a constituency that will expect more, driving further improvements in customer service and accountability. This approach also ensures sustainability—which prosecutions coached by foreign attorneys and conducted at the whim of the president can never guarantee.

Incremental improvements may not be what the international community wants to see. A highly visible prosecution—even though it effects no change to the underlying system—is much more exciting than a reduction in the number of signatures required for a license. But there are no shortcuts to good government.

Inge FryklundInge Fryklund, JD, PhD, is a former Chicago prosecutor. Over the past decade, she has worked with governmental entities in Afghanistan, Iraq, Kosovo, and Tajikistan.