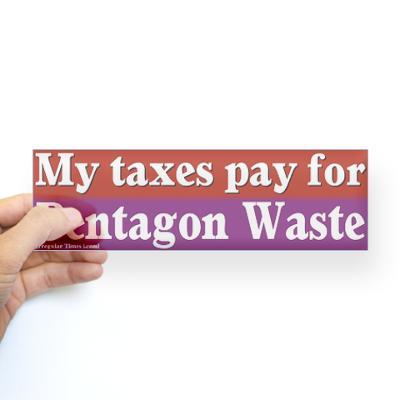 Here's a way to reduce the military budget without threatening national security.
By Gabriel I. Rossman | July 26, 2012 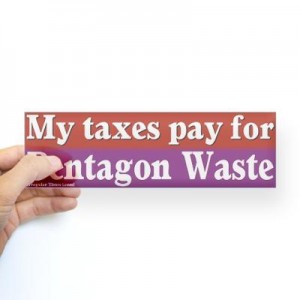 One minor piece of good news came out of the defense spending bill that the House passed last week. While approving a bill giving more to the Pentagon than the Pentagon asked for, the House did remove a few small items from the military budget. One was dear to the heart, and campaign war chest, of Hal Rogers (R-KY), the chair of the spending committee.

In May, The New York Times reported that the Army was purchasing $17,000 drip pans for some of its Black Hawk helicopters. A drip pan’s function is straightforward: catching liquid waste. $17,000? Drip pans costing only $2,500 (nearly eight times less) are regularly purchased for the military’s other helicopters.

The Pentagon has a long history of wasteful spending. But huge budgets, like this year’s $606 billion, are difficult to comprehend and therefore hard to argue with. That’s why things like $17,000 drip pans are helpful symbols of the larger problem of unrestrained military spending. In the mid 1980s, scandals erupted over the $436 hammer, the $7,622 coffee maker, and, perhaps most infamously, the $640 toilet seat. The price tags on these items evoked visceral reactions from citizens who knew how much these things really cost and were outraged that their tax dollars were being spent on overpriced versions of basic household goods.

In the wake of the Times article, the House decided to prohibit the chair of the spending committee from granting future drip pan contracts to a loyal campaign contributor when other manufactures could provide a comparable product for a fraction of the price. This is certainly a small step toward reducing military waste. But if Congress truly wanted to rein in spending, it would do more than take symbolic action to buy cheaper drip pans for a few military helicopters (an action which will save $5 million over three years out of a six hundred billion dollar budget).

Indeed, the Appropriations Committee’s attempt to avoid a scandal should not be mistaken for a serious attempt to curtail military spending. The very same day, the Committee voted down numerous proposals for more substantial waste reduction. One of the rejected proposals sought to reduce annual funding for military bands from $330 million to $180 million. Another sought to cut the $72.3 million the military spends on advertising at NASCAR races. Both proposals would have significantly reduced the budget without compromising national security.

Congressional reluctance to curtail wasteful military spending is particularly perplexing given the current climate of fiscal austerity. If Congress really were committed to reducing wasteful spending, a natural place to start would be decommissioning the F-35 Joint-Strike Fighter. The military plans to spend overt $400 billion to develop and acquire about 2,500 F-35s in the coming decades, despite lingering safety concerns and the questionable usefulness and viability of the aircraft.

Congress could also claim $4.5 billion in savings by canceling the construction of the CMRR-NF, a new nuclear research facility in New Mexico. By scraping the project, Congress would merely be following its own advice: in 2008, the House Appropriations Committee reported that the proposed facility “had no coherent mission.”

Because the “Supercommittee” failed to agree on a deficit-reducing budget, sequestration, which calls for $109 billion in across-the-board spending cuts in 2013, is set to take effect on January 2. Many of the same people who adamantly advocated for sequestration are now insisting that the military be exempt from the cuts should they occur (see House Republicans). Defense Secretary Leon Panetta is also appealing for the military’s exemption, warning of the “doomsday scenario” that would befall the United States should sequestration strike the military.

Sequestration is not the best way to reduce government spending. That is certain. However, sequestration would not incapacitate the military nor decimate its budget—it would simply reduce spending to approximately its 2006 level of $570 billion. China, the world’s second largest defense spender, spent $129 billion on defense in FY 2011. In other words, even with sequestration, the U.S. would be spending four-and-a-half times more than the next largest defense spender (in FY 2010, the U.S. spent as much on its military as the next 17 countries combined). Moreover, reductions in defense spending are appropriate and inevitable, given that the United States has ended the war in Iraq and is withdrawing troops from Afghanistan.

Sequestering military spendingis not a “doomsday” scenario. It is a non-ideal solution to a problem—the bloated military budget—that desperately needs to be addressed. It’s reassuring that Congress is axing those $17,000 drip pans. But that’s only a bit of gristle compared to the huge amount of fat in Pentagon spending.

Gabriel I. RossmanGabriel Rossman is a contributor to Foreign Policy In Focus.