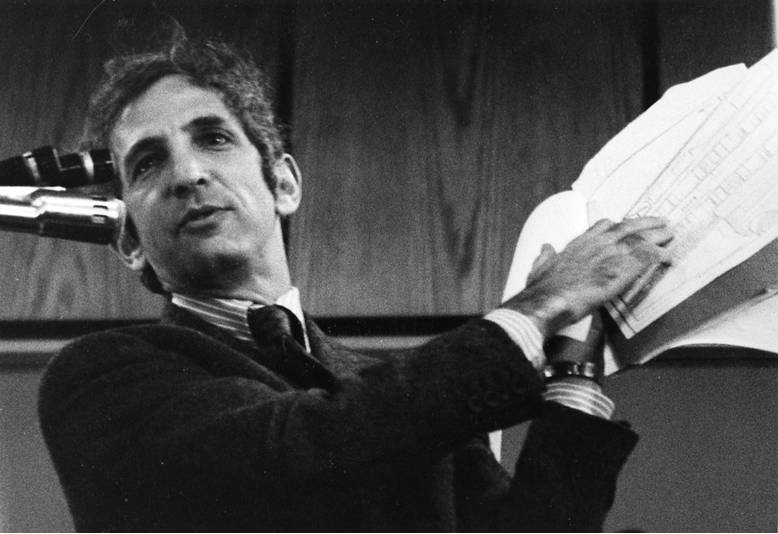 Daniel Ellsberg Was a Hero Long Before the Pentagon Papers

Daniel Ellsberg was critical in dialing back the insanity that was U.S. nuclear strategy in its formative years.
By Russ Wellen | September 11, 2015

Most of us know Daniel Ellsberg because he copied and released the top-secret Pentagon studies of the Vietnam War known as the Pentagon Papers. Ellsberg actually ran the documents by the Institute of Policy Studies before sharing them with the New York Times. As you know, Watergate ensued and American politics has never been the same.

What most of us don’t know is that, long before that, Ellsberg was already a hero, albeit an unlikely one. In The Wizards of Armageddon (Touchstone / Simon & Schuster, 1983), Fred Kaplan’s book on the RAND Corporation, tasked by the U.S. Air Force with sculpting U.S. nuclear weapons strategy, he writes:

Ellsberg, at this time, was an extremely hardline Cold Warrior. After taking his doctorate exams at Harvard in 1953, he had enlisted in the Marine Corps (hardly typical for a budding Ivy League Ph.D. candidate), became a company commander and, in 1956, extended his duty when his battalion was sent to the Mediterranean, savoring the prospect of possible combat in the Suez crisis.

Ellsberg truly believed, as did most of his comrades at RAND, that some sort of armed conflict between the superpowers would erupt in the coming decade. Seeing the military planned on automatically escalating the conflict to all-out nuclear war terrified him.

It called for shooting off, as quickly as possible, the entire portion of the U.S. strategic nuclear force that was on alert, 1,459 nuclear bombs … totaling 2,164 megatons in all, against 654 targets — military and urban-industrial, simultaneously, in accordance with SAC’s “optimum-mix” strategy — in the U.S.S.R., Red China and Eastern Europe. China was targeted because it was part of the “Sino-Soviet Bloc,” Eastern Europe because it hosted hundreds of Soviet air-defense radar and missile sites, which had to be “taken out” so that SAC bombers could fly safely through the corridors leading to the Russian heartland. JSTPS calculated that the U.S. alert force alone would kill 175 million Russians and Chinese.

If the entire force were launched — and this is what was called for if the U.S. fired a preemptive first-strike — the attack would involve 3,423 nuclear weapons, totalling 7,847 megatons; it would kill 285 million Russian and Chinese and severely injure 40 million more. None of these figures included the millions of casualties in Eastern Europe or the fallout victims in the free world.

I know, you’re at a loss for words. To Ellsberg: “the implications were staggering.” To repeat, as Kaplan sums up:

The military’s nuclear war plan was a single war plan, calling for blowing up all enemy targets in Russia, China and Eastern Europe as quickly as possible, with the chances of restraining or redirecting the attack remote at best. Ellsberg saw that the JSCP, the terms defining the overall war plan, called for carrying out this nuclear attack whenever the U.S. and the U.S.S.R directly engaged in battle, however tentatively, over however grand or trivial a cause. [Emphasis added.]

… finished a draft of the revisions for a basic national security policy that … suggested a strategy for achieving U.S. wartime objectives “while limiting the destructiveness of warfare. … Specifically, the United States does not hold all the people of Russia, China or the [East European] Satellite nations responsible for the acts of their governments. Consequently, it is not an objective of the United States to maximize the number of people killed in the communist Bloc in the event of war.” … Over and again, Ellsberg stressed the need for a durable reserve force and an enduring command-control apparatus, which had no place [in the] SIOP-62.

… Meanwhile, Ellsberg was crusading all over official Washington …. urging them to change its definition of “general war” so that an armed conflict between the U.S. and the Russians would not inevitably escalate into nuclear war of any sort.

With practically every national security adviser in the Administration — and the President himself — keen on building up non-nuclear forces, this effort succeeded and the following year’s JSCP was changed accordingly.

Of course, setting the United States on the course to disarmament would have been preferable, but helping draw us back from the brink of disaster was a crucial, heroic act by Daniel Ellsberg arguably equal to releasing the Pentagon Papers.