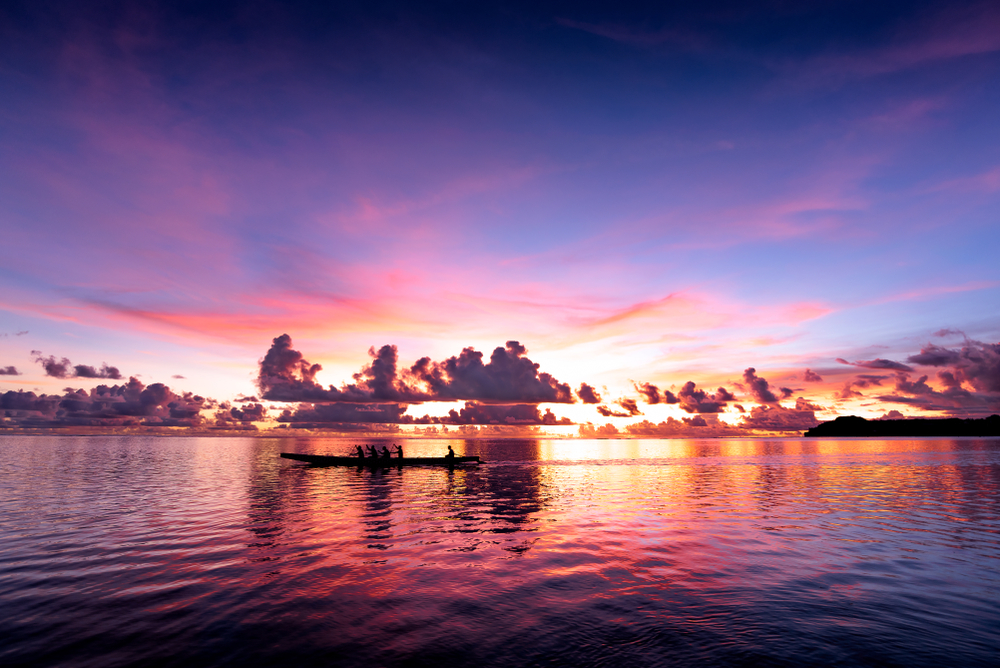 A small rowboat off the coast of Guam (Shutterstock)

Death and Living in the Face of Empire

Julian Aguon’s ‘The Properties of Perpetual Light’ is a thoughtful meditation on how, to understand problems at the center of a colonial society, we have to look at the margins.
By Khury Petersen-Smith | September 7, 2021 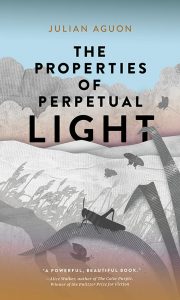 For a series of months in 2017, Donald Trump escalated U.S. belligerence toward North Korea. This culminated in a September speech at the United Nations during which he threatened to “totally destroy” the Asian country. That August, as part of the rising temperature between both governments, North Korean premier Kim Jong-un threatened to attack Guam — which is a U.S. territory — with missiles that could reach the Pacific island in 14 minutes.

The acrimony made for a news story that brought American media to Guam. Reporters descended upon the island. The president called the island’s governor on the phone to assure him and its residents that Washington stood with them “a thousand percent.”

Senator Lindsay Graham, speaking on CBS This Morning, did the opposite. Speaking to a mainland American audience, he vowed, “if there’s going to be a war, it’s going to be in the region, not here in America.”

After a week, the story subsided. The journalists boarded planes and flew away.

In his book The Properties of Perpetual Light, Julian Aguon invites readers to consider these events not from the American metropole, but from Guam itself. He invites us in, to stay a while, after the camera crews leave.

The gesture is a gift. Given the media’s disinterest in Guam and its neighboring islands, it is difficult for those of us living in the continental United States to access the experiences of these places’ residents. Those experiences are relevant to any number of urgent, public conversations here and elsewhere.

Bringing ‘Out There’ In 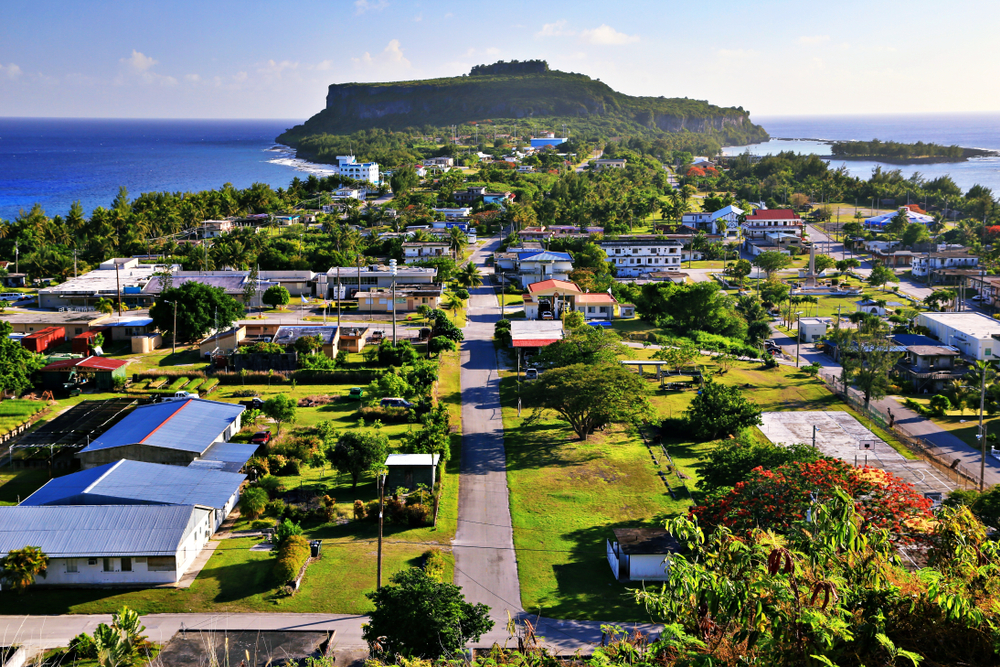 Many of us living in North America who are concerned about climate change, for example, have a sense that Pacific Islands are facing particularly severe impacts from rising sea levels. But that knowledge tends to be vague and limited, as actual residents of these islands are rarely invited to the table to speak for themselves.

This is not accidental. Commenting during the Nixon administration on U.S. nuclear testing in the Marshall Islands, which share the same region of the Pacific as Guam, Henry Kissinger said “there are only 90,000 people out there. Who gives a damn?”

The U.S. has long had an interest in Marshallese and other Pacific Islanders remaining “out there” in the American mind. This marginalization helps allow the U.S. to carry out military operations in the region, along with policies that further climate change and other harms, while keeping most Americans unaware of these practices’ impacts in the Pacific.

This makes Aguon’s offering all the more a blessing.

In The Properties of Perpetual Light, Aguon writes about nuclear weapons, and not only in terms of the threat they pose in potential use during armed conflict today. Aguon writes about the rise of these weapons, and Micronesia’s key — if overlooked — role as a site where they were tested. The U.S. detonation of dozens of atomic bombs in the Marshall Islands’ Bikini and Enewetak Atolls has displaced residents, made generations sick, left behind radioactive waste, and severely contaminated land and water.

Aguon threads stories like these through his book, an assemblage of memoir, poetry, eulogy, and speeches over the years. A human rights lawyer who is part of the CHamoru Indigenous community that is native to the Mariana Islands (which include Guam), Aguon is a longtime critic of U.S. militarism and present-day colonialism. His writing stretches time, reaching back to before crisis points, and continuing after news outlets stop covering the story.

Such an approach allows readers to explore enormous events by tuning into the ways that vulnerable experience them. In a passage about the U.S. Defense Department’s project to destroy 1,000 acres of limestone forest for the purpose of building firing ranges, we are invited to look beyond noisy Caterpillar bulldozers tearing into earth and uprooting trees and notice the actual caterpillars, whose habitat and existence are at stake.

About that habitat, Aguon writes, “such forests house the host plants for the endemic Mariana eight-spot butterfly,” into which the caterpillars transform. “But then again, maybe a country that routinely prefers power over strength, and living over letting live, is no country for eight-spot butterflies.”

In this way, Aguon writes about urgent things without alarm, but with the patience and softness to appreciate their fullness, as well as their gravity. He writes about climate change from the perspective of those with limited resources to defend themselves from its impacts. He writes about conflicts driven by belligerent military powers that threaten to boil over and swallow those who do not figure in the calculations of policy makers or generals. 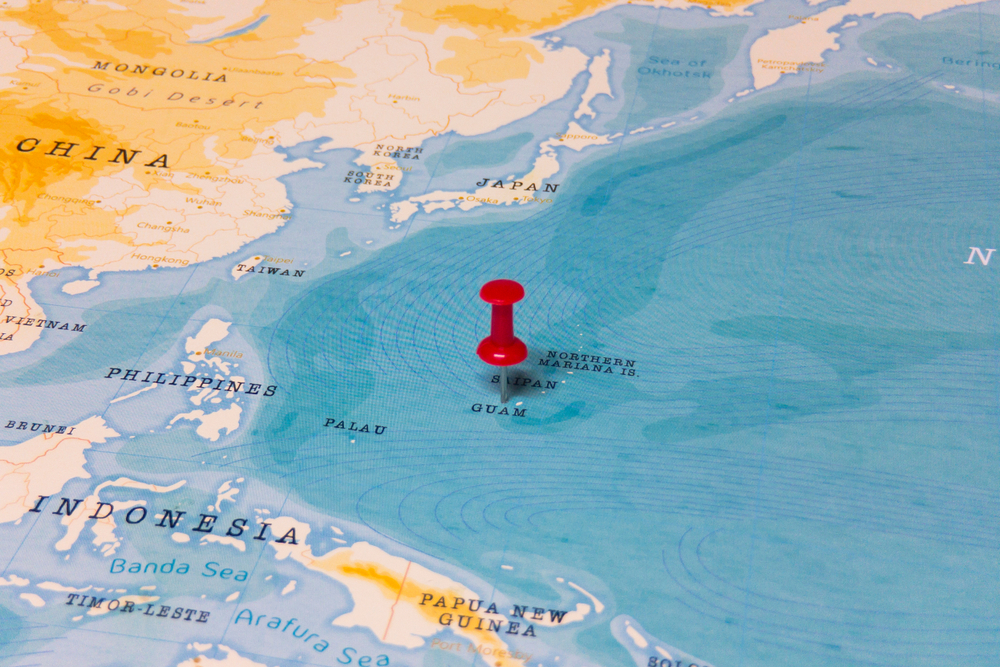 Guam and the Northern Mariana Islands’ location in the Pacific (Shutterstock)

Of course people, animals, and other forms of life exist in these precarious categories all over the world. But it is a gift to consider them from Guam in particular.

Guam is pushed to the margins of the American mind — so much that most people in the mainland U.S. are unlikely to know that the island is formally counted as part of the United States’ territory. That status for the island goes back to the Spanish-American War, in which the U.S., in victory over Spain, seized a number of places that had been colonized by the declining empire — including Puerto Rico, Cuba, and the Philippines.

Between the late 1800s and World War Two, the Spanish, German, Japanese, and U.S. empires vied for control of the islands of Micronesia and others throughout the Pacific. The U.S. saw Pacific islands as useful for locating military outposts and fueling stations — and mining raw materials for explosives — as it projected power into Asia and extended its overseas empire in the 19th and 20th centuries. The American victory over Japan in the Second World War secured its control over the region and cemented an outlook that saw Guam and its neighbors as assets in building military power.

Like the U.S. Virgin Islands and Puerto Rico, Guamanians are U.S. citizens who are not allowed to exercise the full rights of their citizenship while residing on the island. They have only a non-voting delegate in Congress. Guam — along with American Samoa, the U.S. Virgin Islands, and the Commonwealth of Northern Mariana Islands — is administered by the Orwellian-named Office of Insular Affairs. This falls under the purview of the Department of the Interior, which is ironic given Guam’s physical distance from and political marginalization within the interior of the United States.

With this place in U.S. politics and society, Guam enters U.S. national consciousness occasionally and fleetingly — and almost always in the context of the military. Guam as the dry land where the USS Roosevelt — the aircraft carrier where the military’s largest COVID-19 outbreak took place — docked. Guam as a potential target of Asian states deemed “enemies” by the United States.

Universal Experiences at the Margins 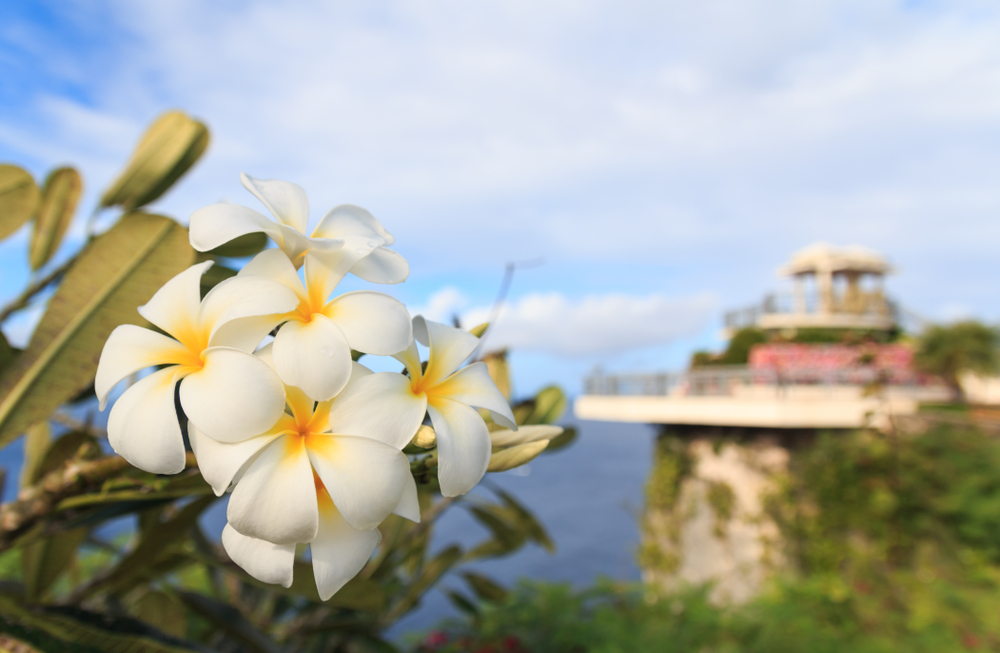 We all benefit from Aguon’s recounting of stories from Guam and its island neighbors, which he has also told in his books Just Left of the Setting Sun, What We Bury at Night, and The Fire This Time. But beyond the richness of experiences particular to Guam and other Pacific Islands, Aguon offers readers precious insights on universally human themes that will resonate with people everywhere, especially now. He writes about finding joy and resilience in the ordinary.

He writes about defending the vulnerable, recalling a childhood memory of standing up for someone when he was targeted for violence on the school bus. In 9th grade, Aguon and another student were kicked off the bus for intervening to stop the stabbing of their classmate, who was from the island of Chuuk, in the Federated States of Micronesia. Aguon and Nikki bonded on their walk home in an electric, adolescent moment of connection set off by being punished for doing the right thing. “I learned that day about what happens when we stand up for each other,” Aguon writes. “We find our friends. And our way home.”

Aguon also writes about death and loss, with the attentiveness of someone who lost his father during childhood — which is an experience that Aguon details with tender courage and honesty. Indeed, the book’s title comes from a mourner’s prayer, “a Catholic prayer for the dead that children in Guam learn early on, our parents having dragged us to more rosaries than we can remember. While the prayer is beloved by Catholics everywhere, here we cradle it closer than most, if only because there is just so much death.”

In addition to a meditation on risk and loss, The Properties of Perpetual Light is a celebration of resilience, individual and collective. Aguon recounts the story of two CHamoru people who were captured by the U.S. Navy in the early 20th century. The man and woman had leprosy, and the Navy had a policy of confining such individuals to facilities where personnel studied the effects of the disease. It was an isolating, dehumanizing, and colonial experience. Both of the patients were unnamed in the historical record, and one had lost his eyesight, while the other lost the use of her legs. The two escaped — one carrying the other, and the other seeing for the pair — and evaded capture by the Navy for a full month in the jungle.

Aguon learned about the story from his mentor and University of Guam professor Anne Perez Hattori.

“As a young activist who had never felt more at home than in the struggle for social justice,” Aguon writes, “and who had always longed to inherit a more magical legacy than the one on offer, the gift Anne gave me was nothing less than the ancestors I looked for my whole life.”

We need these stories of sorrow and survival, and voices like Aguon’s as we collectively face problems like climate change, pandemics, and intractable militarism and wars — challenges that transcend space and borders and affect the whole world, but affect many of us more than others. When conversations meant to address these problems exclude places like Guam, they are painfully incomplete. Failures to include Pacific Islanders in discussions about dismantling the U.S. nuclear arsenal and undoing the drivers of climate change, in addition to overlooking human experiences that matter, undercut those efforts.

We also have much to learn from Guam’s CHamoru community in our conversations about decolonization and racial justice. In The Properties of Perpetual Light, Julian Aguon is extending another opportunity in the form of a warm and generous hand. We would be wise to extend our own in an embrace.

Khury Petersen-Smith is the Michael Ratner Fellow at the Institute for Policy Studies.