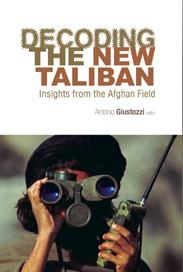 ‘Decoding the New Taliban: Insights from the Afghan Field’

Understanding the strength of the Taliban and its supporters could provide needed insight on how to overcome the Taliban using other tools than just the military.
By Gabriela Campos | February 12, 2010

In early February, President Obama submitted his defense budget, asking for an additional $33 billion for the expansion of the war in Afghanistan on top of a record-breaking $744 billion for the Department of Defense. His request follows the decision to send an additional 30,000 troops to Afghanistan, in the belief that greater military might is needed to defeat the Taliban and win the war. However, understanding the strength of the Taliban and its supporters could provide needed insight on how to overcome the Taliban using other tools than just the military.

Decoding the New Taliban: Insights from the Afghan Field, edited by Antonio Giustozzi, a fellow at London School of Economics, addresses the recent reemergence of a stronger Neo-Taliban. Written by over 10 contributors including journalists, experts, and academics, Decoding the New Taliban focuses on how the Taliban has been able to restructure and reorganize throughout the country. Giustozzi chose to divide the book into regional chapters since Afghanistan is highly diverse ethnically, politically, and economically.

Though each chapter chronicles the presence of the Taliban insurgency in a specific region, the entire book presents itself as a critical tool for understanding the Taliban, how they are organized, as well as through what means and why they were able to reemerge stronger and more widespread since 2001. The first chapter sets this tone, as journalist Gretchen Peters illustrates how opium financed the Taliban’s comeback — they reaped the benefits of opium produced in the southern provinces, accounting for about 80 percent of the global supply in 2008. Joanna Nathan’s chapter on “Reading the Taliban” presents itself as a broader reading of how the Taliban has increased their attention on communications, and have used the media to disseminate their message reaching broader audiences throughout the country and across Afghan borders.

All chapters, to a certain extent, contain firsthand accounts of interviews with civilians and insurgents. Award winning journalist Graeme Smith’s chapter, “What Kandahar’s Taliban Say,” exemplifies such. Interviews with tribesmen, insurgents, and religious students show that the Taliban have been a growing force in Kandahar. Through such interviews, Graeme experiences firsthand the strength of the anti-American sentiment among the insurgents. “Even if you give me so much money that I can’t spend it my entire lifetime, I will not stop. I would not accept it and would continue my fight because I do not want non-Muslims and the people of other religions in my country.”

Other chapters chronicle how the Taliban were able to infiltrate what were once stable regions. Such is the case with the capital city of Kabul, and the “stable and safe” northeast. There is a strong correlation between the strength of the Taliban and the weakness of the state and central government. In Kabul, according to the author and governance advisor at the Asia Foundation, Mohammad Elias, local people’s social and religious mindsets, as well as the presence of government corruption at the state level, facilitated the Taliban’s emergence. A chapter in the regions of the northeast highlights the common misconception that the Taliban do not possess strongholds there, and have slowly moved into the region through holes created by corruption and poverty, creating fertile conditions for recruitment at the village level.

Though Giustozzi and the contributors address the insecurities and the new presence of the Taliban in each region, there are no solutions offered to the quagmire the United States and NATO are encountering. Critical questions remain unaddressed: How should NATO and U.S. forces address the expansion of the Taliban into Kabul or the Northeast? Are U.S. troops only fueling the fire when it comes to resentment and the recruitment of Taliban insurgents at the village level? What are the most effective ways to counter the Taliban?

Though Decoding the New Taliban is a much-needed book to interpret and understand the Taliban’s evolution since 2001, the contribution would be much stronger if it provided recommendations on how the Taliban can be best addressed politically, economically, socially, and militarily. Despite such shortcomings, those making policy in the region would be wise to pick up this work as our nation falls deeper into the war in order to best understand the roots of the problem.