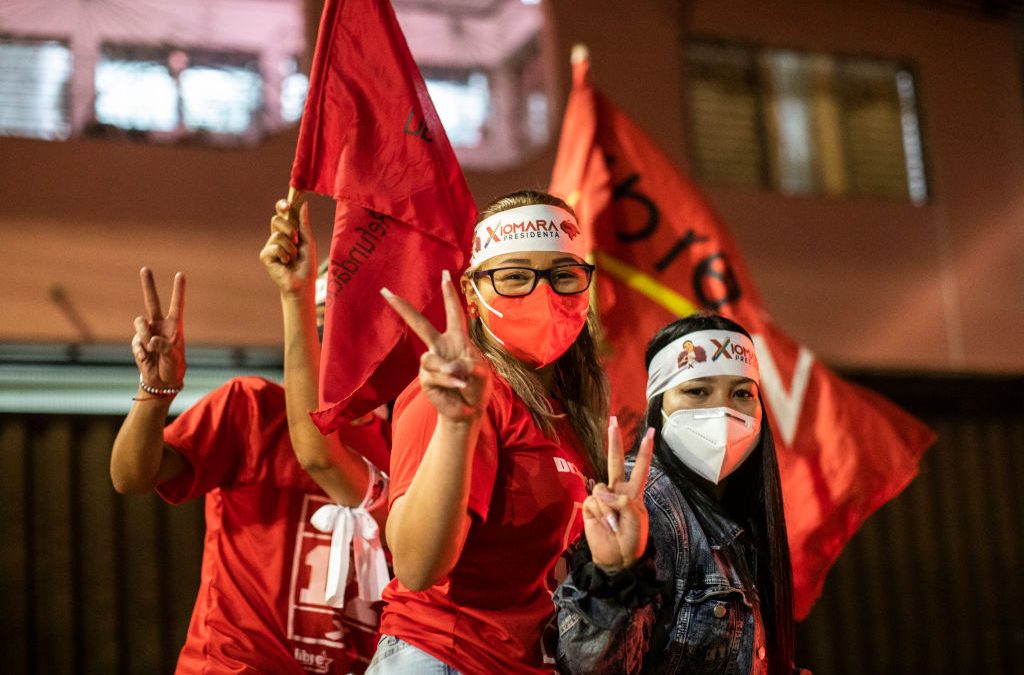 The last decade saw democratization in El Salvador and brutal repression in Honduras. Suddenly, those trends appear to have reversed.
By Manuel Perez-Rocha | December 21, 2021

With the election of Xiomara Castro as their next president, the Honduran people can hope that the state of terror they’ve lived in since the coup d’état in 2009 is a matter of the past. However, their neighbors in El Salvador are facing a different fate as president Nayib Bukele unleashes his dictatorial ambitions, plunging the country into a nightmare.

The two countries have taken a 180-degree turn and are now immersed in very different political trends.

During the past decade, El Salvador and Honduras went in opposite directions.

With the progressive Farabundo Martí National Liberation Front (FMLN) taking power in El Salvador 2009 — the first time since the 1992 peace accords that ended the country’s civil war allowed it to become a political partyt — wo successive FMLN governments led El Salvador on the path of democratization. As Salvadoran civil society got stronger, the country achieved great things, such as the unanimous adoption by the country’s legislature of a law banning metallic mining — the first of its kind in the world.

In contrast, the progressive Honduran government of Manuel Zelaya was toppled by the 2009 U.S.-backed coup d’état which, over the next decade, consolidated a “narco-state” under the presidencies of Porfirio Lobo and Juan Orlando Hernández and served the Honduran elite and foreign corporate interests.

“Behind the coup d’état and its consolidation through successive electoral frauds are the interests of extractive capitalism which, in order to impose itself, has made Honduras one of the most dangerous countries in the world for human rights defenders, particularly for those who defend territories from plunder and environmental devastation,” declared the Women’s Mesoamerican Initiative of Human Rights Defenders. Michael Frost, the UN Special Rapporteur on the Situation of Human Rights Defenders, revealed that around 97 percent of crimes committed against human rights defenders in Honduras remain unresolved.

Carla García, international coordinator of the Honduran Black Fraternal Organization (OFRANEH), tells me with enthusiasm that “the triumph of Xiomara Castro represents hope for the Garífuna people of Honduras of a dialogue and of changes to the territorial policies that aimed at clearing the land to create Zones of Employment and Economic Development (ZEDE) which essentially aim to strip us of our territories”.

For Juan López, a teacher with the Municipal Committee in Defense of the Commons and Natural Assets of the Municipality of Tocoa, the victory of Xiomara Castro “shall allow us to address with greater objectivity and technical truthfulness the case of the eight activists imprisoned for protecting the rivers from mining exploitation, and bring back freedom to our territory.”

In contrast to Honduras’ shift to the left, El Salvador fell in the hands of ultra-right-wing forces since Bukele’s election in 2019, slipping possibly into a more permanent authoritarianism that strives to break away from the tradition of the left and right alternating in power.

Bukele has called himself the “coolest dictator in the worldy world” (sic), mocking his critics dismayed by the massive layoff of state workers and the imprisonment of political adversaries without the right to due process. Bukele’s totalitarian actions also include the adoption of Bitcoin as legal currency and motions to remove the country’s attorney general and Supreme Court justices and replace them with subordinate substitutes. Bukele is also pushing for constitutional changes that would allow him to seek reelection.

Human rights organizations have expressed “concern regarding the deterioration of the human rights situation, [the] consolidation of authoritarian rule and hate speech against human rights defenders, organizations, and media in El Salvador.” They also declared that the “deteriorating human rights situation is a result of President Nayib Bukele and his party’s abuse of power, as well as the ongoing dismantling of public entities and national controls that would be in positions to prevent internal abuses of power.”

Bukele’s Foreign Agents Bill is his most recent authoritarian onslaught. If passed, organizations that receive funding from external sources will have to officially register as “foreign agents” and be excluded from any political activity that is perceived as “disturbing public order” and “threatening national security” or “the country’s social and political stability.” The bill has been strongly condemned by local and international organizations and represents another step towards silencing criticism, restricting freedom of expression and association, and criminalizing independent voices.

“Foreign entities” that fail to register within eight days of the law’s passage and comply with its provisions — to be “determined at the discretion of the authorities” — could lose their legal status, face criminal charges, and receive fines of up to $150,000. This law would also impose a 40 percent tax on the funding received by these organizations, a rule that is unprecedented anywhere in the world. The UN and countries such as Germany voiced their concerns about the initiative, but even as Bukele deploys raids throughout the country against human rights organizations.

In Honduras, El Salvador, and the world, as ousted Brazilian president Dilma Rouseff said in an interview with La Jornada during the last meeting of the Puebla Group, “the greatest mistake is to take democracy for granted.” The ultra-right forces are on the loose.

This article was adapted from a Spanish-language version originally published in La Jornada.

Manuel Perez-Rocha is an associate fellow at the Institute for Policy Studies. He’s on Twitter at @ManuelPerezIPS.