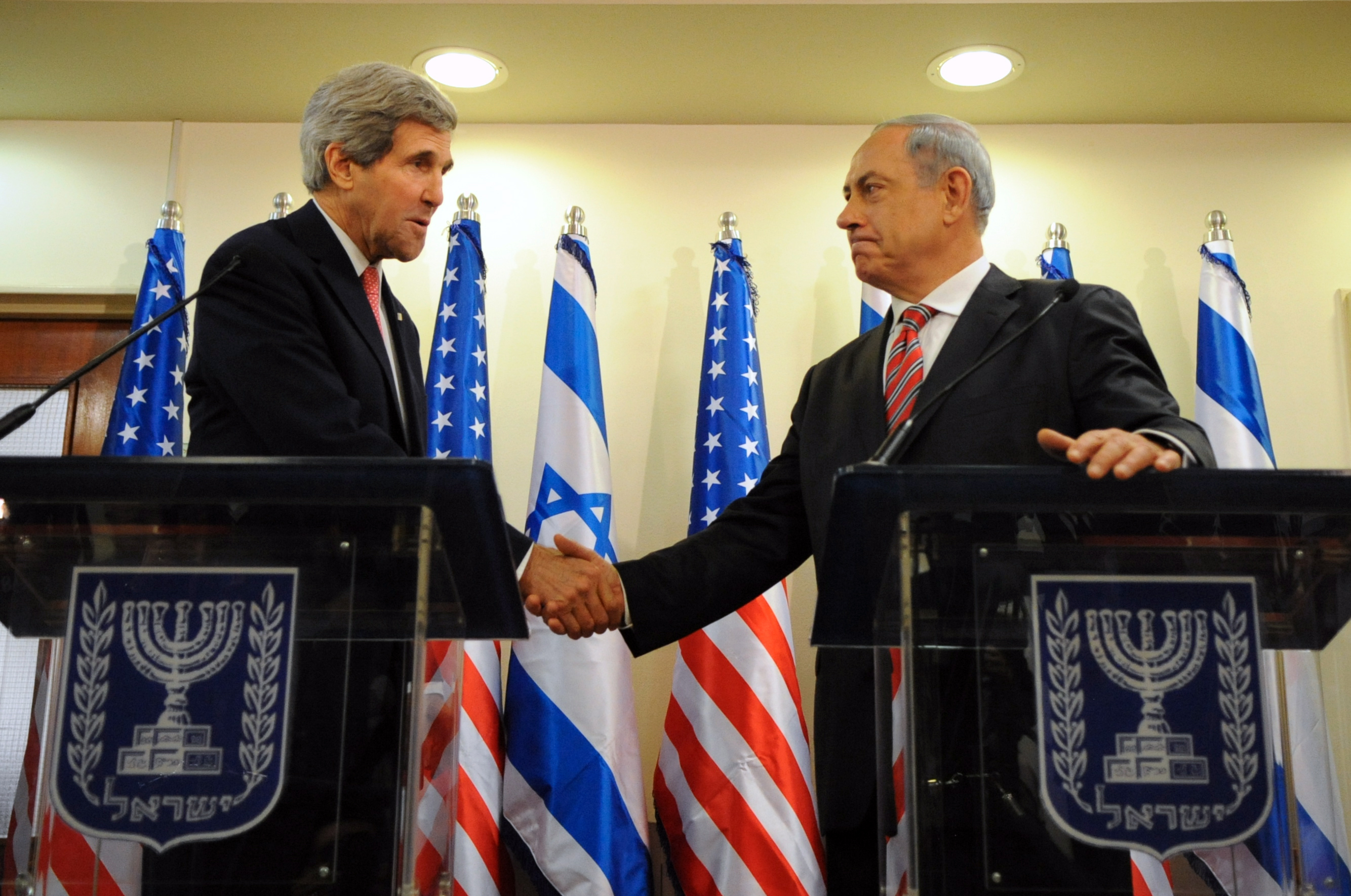 The U.S.-brokered Israeli-Palestinian peace talks have come to a screeching halt. But unlike at Camp David, this time the U.S. has all but admitted the blame lies with Israel. (Photo: Wikipedia)

Once Again, Democrats Are Blowing It on Middle East Peace

In the first major foreign policy vote of the new Congress, most Democrats sided with Donald Trump — and against international law — on Israeli settlements.
By Stephen Zunes | January 11, 2017

On January 5, a majority of House Democrats joined virtually every Republican in voting for a resolution that criticized the U.S. refusal to veto an otherwise unanimous UN Security Council resolution opposing Israeli settlements in the occupied West Bank. The House resolution called opposition to Israel’s illegal colonization efforts “anti-Israel.”

In effect, 109 of the House’s 193 Democrats declined to challenge Trump on the first foreign policy vote of the new Congress, raising concerns that there will be little opposition in Congress to Trump’s agenda once he comes to office.

In a break from the Obama administration’s recent practice at the United Nations, however, the U.S. also declined to veto the resolution, allowing it to pass. Trump and his bipartisan supporters in Congress argued that the United States should have actually vetoed the resolution.

The resolution called on both the Israeli and Palestinian governments to prevent violence against civilians, condemn and combat terrorism, refrain from inciting violence, and comply with their obligations under international law. However, the House statement criticizes the UN resolution for being “one-sided.”

The reason for such a claim was that there were also clauses in the Security Council resolution that criticized illegal Israeli settlements. The reason for “one-sidedness” on this subject is clear: Israel is the only one of the two parties which is illegally settling occupied territory — a violation of the Fourth Geneva Convention, as confirmed by the International Court of Justice and a broad consensus of international legal scholars and human rights organizations.

It’s unlikely that Congress would have opposed any UN resolution against violations of the Fourth Geneva Convention committed by the Palestinian side, such as a resolution that condemned suicide bombings by Hamas.

H. Res. 11, the House statement, effectively equates opposition to the illegal colonization drive by Israel’s right-wing government with opposition to Israel itself. This would appear to be part of a bipartisan effort to delegitimize any criticism of Israeli policies.

Ironically, moderate pro-Israel groups such as J Street and Americans for Peace Now supported Obama’s decision not to veto the resolution, recognizing that unfettered expansion of settlements will make the establishment of a viable contiguous Palestinian state alongside Israel impossible — and therefore eventually force Israel to choose between being a democracy or a Jewish state.

UN Resolution 2334 simply reconfirmed the longstanding consensus that such settlements are illegitimate. Article 49 of the Fourth Geneva Convention — to which both Israel and the United States are signatories — bars any occupying power from transferring “parts of its own civilian population into the territory it occupies.”

The United Nations, through such measures as Security Council Resolutions 446, 452, 465, and 471, has repeatedly recognized that the West Bank and East Jerusalem constitute territories under foreign belligerent occupation — and that Israel’s settlements are in violation of this critical international treaty. A landmark 2004 decision by the International Court of Justice confirmed the same. In that ruling, the World Court enjoined the United States and other signatories of the Fourth Geneva Convention to “ensure compliance by Israel with international humanitarian law.”

Furthermore, the official U.S. State Department position, adopted in 1978 and never repealed, states that “the establishment of the civilian settlements in those territories is inconsistent with international law.”

Both Republican and Democratic administrations, recognizing that the settlements make establishing a viable contiguous Palestinian state impossible, have opposed expansion on the grounds that it’s “an obstacle to peace.” The U.S.-backed peace plans put forward by former CIA director George Tenet and the Mitchell Commission called for a freeze on Israeli settlement activities, as did the much-vaunted “Road Map for Peace,” which both the Bush and Obama administrations repeatedly stressed was necessary to resolve the conflict.

However, H. Res. 11 challenges the United Nations’ right to enforce or even address issues of international law in territories under foreign belligerent occupation.

This contrasts with other such occupations where the United States has pushed for UN involvement, such as Iraq’s 1990-1991 occupation of Kuwait. The United States didn’t insist then that the matter be left to direct negotiations between the governments of Iraq and Kuwait. Congress’s claim that the Israeli-Palestinian conflict should only be the subject of negotiations between the occupier and those under occupation challenges the very basis of why the UN should exist in the first place.

The bipartisan resolution’s attack on Obama includes charges that the administration “departed from longstanding policy” by abstaining from UNSC resolution 2334. In reality, the United States has supported or abstained from voting on more than 50 UNSC resolutions critical of Israeli actions since its 1967 conquest of the West Bank. This latest vote is the first resolution critical of Israeli violations of international law the Obama administration allowed to pass in its eight years in office, but even this was apparently too much for Congress.

Despite polls showing that a majority of Democrats would support imposing sanctions or even more strenuous measures against Israel to stop the expansion of illegal settlements, the Obama administration made clear that it would veto any resolution that had any enforcement provisions. Despite this, H. Res. 11 insists that the UN resolution unfairly “imposes” terms for final status negotiations on the parties, and even “contradicts the Oslo Accords.”

Congress has never, however, indicated that the settlements themselves violate the Oslo Accords, which prohibit both parties from taking any steps which “change the status of the West Bank… pending the outcome of the permanent status negotiations.” Oslo also stipulates that the West Bank should be considered a “single territorial unit,” which presumably means not dividing the West Bank up in a series of non-contiguous cantons as a result of Israeli settlements blocs.

Yet another disturbing aspect of the H. Res. 11 is that it questions the status of East Jerusalem as occupied territory. The U.S. State Department, the International Red Cross, the United Nations, and the International Court of Justice have long recognized lands seized by Israel in the June 1967 war, including East Jerusalem, as “occupied territories.” This has been reiterated in a series of UN Security Council resolutions (beginning with 252, 267, 271, 298, 476, and 478) — passed without U.S. objections during both Democratic and Republican administrations — which specifically recognize East Jerusalem as being under foreign belligerent occupation.

Not only was the wording of H. Res. 11 more extreme than virtually any resolution, the so-called “pro-Israel Lobby” was divided.

The more moderate pro-Israel groups, such as J Street and Americans for Peace Now, supported Obama’s UN position and opposed H. Res 11 as being bad for Israel’s long-term interest. However, the majority of Democrats joined Republicans in siding with right-wing pro-Israel groups, such as the Zionist Organization of America and AIPAC — and, by extension, with right-wing Israeli settlers — in support of Trump’s anti-UN position and against the majority of American Jews who oppose them.

As a result, the ramifications of the resolution go well beyond Israel.

The majority of Democrats essentially challenged the United Nations’ right to enforce or even weigh in on issues of international humanitarian law in territories under foreign belligerent occupation. They insist that ending the colonization of an occupied territory can only take place if, when, and on the terms agreed to by the occupying power — and that negotiations with representatives of the occupied must take place without any outside pressure or interference, and without regard to the illegality of the actions by the occupier.

The implication of this vote regarding the United Nations and international law, therefore, are quite disturbing. And, given the major role that American Democrats once played in drafting the United Nations Charter and Fourth Geneva Convention, it’s particularly disappointing that a majority of congressional Democrats now stand in opposition to those very documents.