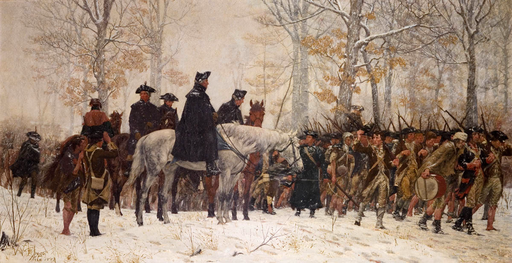 One of the early memoirs by a low-ranking soldier ― and still one of the best ― is Ordinary Courage: The Revolutionary War Adventures of Joseph Plumb Martin, which was published in 1830. He was keenly aware that he was working in a genre that today is known as “people’s history.” One of his main concerns, aside from how poorly the Continental Army was equipped and fed, was what we call today benefits. Martin wrote:

When those who engaged to serve during the war enlisted, they were promised a hundred acres of land each, which was to be in their own or the adjoining states. When the country had drained the last drop of service it could screw out of the poor soldiers, they were turned adrift like old worn-out horses, and nothing said about land to pasture them upon. Congress did, indeed, appropriate lands under the denomination of “Soldiers’ lands,” in Ohio state, or some state, or a future state; but no care was taken that the soldiers should get them. No agents were appointed to see that the poor fellows ever got possession of their lands; no one ever took the least care about it, except a pack of speculators who were driving about the country like so many evil spirits, endeavoring to pluck the last feather from the soldiers. The soldiers were ignorant of the ways and means to obtain their bounty lands, and there was no one appointed to inform them. [Emphasis added.]

Today it’s mainly injured soldiers who experience difficulty obtaining the services and benefits owed them by the Veterans Administration. But as indicated by what was emphasized, soldiers ― just like America’s underserved in general today ― often couldn’t even figure out who to approach for help.

With the sly wit that characterized his colorful book, Martin summarized:

The truth was, none cared for them; the country was served, and faithfully served, and that was all that was deemed necessary. It was, soldiers, look to yourselves, we want no more of you. I hope I shall one day find land enough to lay my bones in. If I had a chance to die in a civilized country, none will deny me that. A dead body never begs a grave; thanks for that.