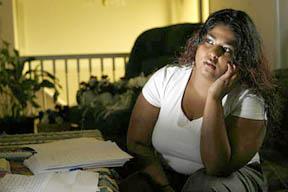 Because of a quirk of U.S. immigration law, some adult adoptees are being kicked out of the country they were brought to as children.
By Jennifer Kwon Dobbs, Caitlin Kee, Kristin R. Pak | July 4, 2012

Excited about turning 18 during a presidential election year, Jenna Johnson registered to vote with her high school classmates and cast her first ballot. She canvassed her local Minnesota neighborhood as a volunteer signing up voters. Then four years later, while sharing stories with other Korean adoptees who remembered their naturalization ceremonies, Jenna couldn’t recall ever experiencing her own. A few days later, she phoned what was then the Immigration and Naturalization Service to check on her status and was shocked to learn that she was not a U.S. citizen. Her green card, which she kept as a memento from her adoption as a 2-year old, had expired.

As a permanent resident, she had unknowingly committed voter fraud, a crime punishable by deportation.

The story of Jenna Johnson (name changed at source’s request) might sound unusual. But she’s actually one of thousands of adult adoptees who were not grandfathered into the Child Citizenship Act of 2000 (CCA), which as of February 27, 2001 grants automatic citizenship to children who arrive in the United States on IR-3 visas. Parents whose children travel on IR-4 visas, which in recent years constitute almost half of all inter-country adoptions, finalize procedures by re-adopting their children in their states of residence at which time citizenship attaches.

Although an estimated 75,000 adopted children were protected on the bill’s enforcement date, adoptees who had already reached the age of 18 were left vulnerable. In this past decade, the media has reported on about 30 of the most urgent cases in which adult adoptees face removal and forced overseas separation from their families in the United States.

Although the CCA exempted adult adoptees like Jenna from losing permanent residency due to voter fraud, it still failed to make her and all other adult adoptees citizens. Why are adult adoptees, who are their parents’ legal children and heirs, any less American than those whose birthdays qualify them for CCA eligibility?

The stories of adult adoptees who lack citizenship and for whom adults acted in “the best interests of the child” bring into question adoption’s most fundamental claim— a forever home for an orphaned child. Yet good intentions do not suffice, and adult inadvertence with regard to a child’s rights creates lifelong hardships.

“My citizenship status is suspended in limbo,” says Jenna, who is now in her mid-30s and struggles to find work as a consequence of her expired green card status. “Why didn’t my adoptive parents get me naturalized?”

Jenna is not alone in asking this question. According to Bert Ballard, critical adoption studies scholar and professor of communications at Pepperdine University, “Hundreds of thousands of children have been adopted to the United States, and if even 1% of those naturalizations never happened under pre-CCA guidelines, then that oversight affects literally thousands of American families.”

The State Department and U.S. Citizenship and Immigration Servicescould cross-reference the number of children who entered the United States on visas issued for the purpose of adoption and the number of these adopted children who were naturalized. However, there is no categorical means by which to identify and track the number of individuals who have already been removed.

Alongside media reports of pending removals, post-adoption service organizations in sending countries like South Korea provide a snapshot of the direst cases. Global Overseas Adoptees’ Link in Seoul, South Koreareports 10 Korean deported adoptees visiting its office for help since 2000. KoRoot, an NGO and guesthouse in Seoul, has brought public attention to three deported Korean adoptees in the past year. One of these adoptees, Tim Yee, was discovered homeless in Itaewon and in need of medical attention.

Adopted children do not emigrate to the United States of their own volition. Instead, globally networked agencies identify and refer them for permanent placement with their adoptive parents who, previous to the CCA’s passage, were expected to file naturalization papers before their children’s 21st birthdays. However, a lack of sufficient agency post-adoption follow-up contributed to parental ignorance or outright negligence.

Erlene Shepherd, adoptive mother to eight children, died of breast cancer before she could file her completed application for Kairi’s citizenship. Growing up in Salt Lake City with seven older siblings, Kairi Shepherd, adopted from India when she was three months old, missed CCA eligibility by a matter of months. After her mother passed away, Kairi was raised by her older siblings despite her grandmother suggesting that she be surrendered for adoption again.

When Kairi was 17, she was introduced to drugs by a co-worker and later charged with check fraud in a state court, which triggered a removal proceeding per 1996 amendments to the Immigration and Nationality Act (INA). Yet the interaction between federal and state laws oftentimes requires navigating a maze of legal definitions, which can be conflicting or unclear in favor of prosecution.

The INA offers immigration judges little discretion when considering humanitarian need. Most adult adoptee removal cases, as reported by the press, are non-violent and involve controlled substance use.

On May 8, an immigration judge ordered Kairi’s removal to India– a country that she has never visited and in which she is a veritable foreigner lacking both cultural and linguistic knowledge. She has 45 days since the date of judgment to enter an appeal before Immigration and Customs Enforcement officials escort her to the airport.

Disabled, she has advanced multiple sclerosis and needs to stay with her family in the United States where she has access to vital care.

“It is incomprehensible to me how the United States can deport her,” says Arun Dohle of Against Child Trafficking based in Brussels, “Just recently, a U.S. adoptive mother [Torry Hansen] was heavily fined for sending her child back to Russia and here the United States is doing something similar by deporting Kairi.”

According to Tobias Hubinette, a researcher at the Multicultural Institute in Botkyrka, Sweden and an expert on Korean adoption, “In Scandinavia, foreign-born adoptees have received citizenship automatically ever since the 1990s although before that, adoptive parents had to apply for citizenship for their adopted children, but even if some might have forgotten or neglected to do that, any deportation of any adoptee has never to my knowledge happened.”

As a signatory to the Hague Convention on Intercountry Adoption since 2008, the United States is obligated to extend all of its rights and privileges to its adopted children (Article 26) and to ensure that they reside permanently in the U.S. — the receiving state (Article 18). Yet the U.S. government has been largely silent about how it intends to fulfill its responsibilities regardless of its adopted children’s birth dates. By comparison, news media from sending countries have voiced their dismay about adult adoptee removals and have called on the United States as the world’s largest adopter of children to take the lead on the humanitarian treatment of them.

Breaking silence, Kairi told The Times of India that she was afraid but not hiding or absconding. “The deportation order will force me to part from my physicians and family, and will be a death sentence.”

Four years after deportation, Joao Herbert’s body was found in the slums of Campinas, north of Sao Paulo, where he had been scraping by as an English instructor. At his funeral in his hometown of Wadsworth, Ohio, his grieving parents, Nancy Saunders and Jim Herbert, remembered their son’s love of soccer and ached for the truth about why their son was murdered.

Joao was survived by a young daughter who was born in the U.S. Under UNICEF’s definition, she became an orphan like her father once was before her grandparents adopted him from Brazil. Yet the conditions of her father’s death and her consequent orphaning could have been averted if Congress had not compromised on a special provision to the CCA granting adult adoptees citizenship.

While Joao’s family struggled to remain together pending his removal, former Congressman William Delahunt, the provision’s sponsor, spoke of Joao’s case before the House of Representatives to emphasize the urgent need for Congress to naturalize all adoptees. “’No one condones criminal acts, Mr. Speaker,” Delahunt said, “But the terrible price these young people and their families have paid is out of proportion to their misdeeds. Whatever they did, they should be treated like any other American kid. They are our children, and we are responsible for them.”

Yet conceding to anti-immigrant sentiment, members of the House stripped out inclusion of adult adoptees in order to push the bill forward, and in so doing, they compromised adult adoptee lives.

“To subject adopted children to deportation, is a gross betrayal of orphaned, abandoned, relinquished children,” says Anjali Pawar, director of Sakhi. “We are aware of cases [similar to Kairi], and as long as children from India adopted by U.S. parents are faced with the threat of deportation, then adoptions from India to the United States, should be halted altogether.”

The United States ought to amend its adoption journey. “Child” refers to kinship, not just age. The United States should immediately naturalize all of its children who immigrated for the purpose of adoption and who were 18 and younger before 1940 when The Nationality Act was enacted. In the interim, the Department of Homeland Security should expedite the withdrawal of all adult adoptee removal cases and permit deported adoptees to return home to their families.

If an adopted child is born through the heart, or so the story goes, then that heart’s love should not expire once the child becomes an adult.