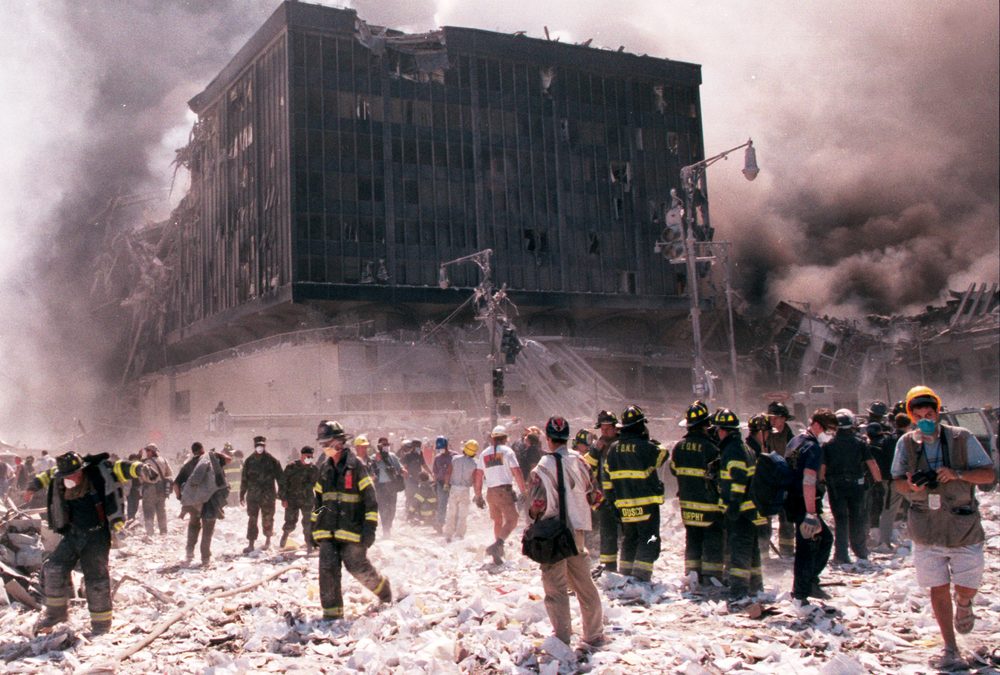 New York City firefighters and journalists stand near the area known as Ground Zero after the collapse of the Twin Towers September 11, 2001 in New York City (Shutterstock)

Twenty years ago, the United States sustained the first substantial attacks on the mainland since the War of 1812. It was a collective shock to all Americans who believed their country to be impregnable. The Cold War had produced the existential dread of a nuclear attack, but that always lurked in the realm of the maybe. On a day-to-day basis, Americans enjoyed the exceptional privilege of national security. No one would dare attack us for fear of massive retaliation.

Little did we imagine that someone would attack us in order to precipitate massive retaliation.

Osama bin Laden understood that American power was vulnerable when overextended. He knew that the greatest military power in the history of the world, deranged by a desire for vengeance, could be lured into taking a cakewalk into a quagmire. With the attacks of 9/11, al-Qaeda turned ordinary American airplanes into weapons to attack American targets. In the larger sense, bin Laden used the entire American army to destroy the foundations of American empire.

The commentary on this twentieth anniversary of 9/11 has been predictably shallow: how the attacks changed travel, fiction, the arts in general. Consider this week’s Washington Post magazine section in which 28 contributors reflect on the ways that the attacks changed the world.

“The attack would alter the lives of U.S. troops and their families, and millions of people in Afghanistan and Iraq,” the editors write. “It would set the course of political parties and help to decide who would lead our country. In short, 9/11 changed the world in demonstrable, massive and heartbreaking ways. But the ripple effects altered our lives in subtle, often-overlooked ways as well.”

The subsequent entries on art, fashion, architecture, policing, journalism, and so on attempt to describe these subtler effects. Yet it’s difficult to read this special issue without concluding that 9/11 in fact didn’t change the world much at all.

The demonization of American Muslims? That began long before the fateful day, cresting after the Iranian revolution in 1979. The paranoid retrenchment in American architecture? U.S. embassies were rebuilt not in response to 9/11 but the embassy bombings in Beirut in 1983-4 and Kenya and Tanzania in 1998. The impact of 9/11 on the arts can be can be traced through a handful of works like Spike Lee’s 25th Hour or the TV series 24 or Don DeLillo’s Falling Man, but it didn’t produce a new artistic movement like Dada in the wake of World War I or cli-fi in response to the climate crisis. Even the experience of flying hasn’t changed that much beyond beefed-up security measures. At this point, the introduction of personal in-flight entertainment systems has arguably altered the flying experience more profoundly.

And isn’t the assertion that 9/11 changed everything exceptionally America-centric? Americans were deeply affected, as were the places invaded by American troops. But how much has life in Japan or Zimbabwe or Chile truly changed as a result of 9/11? Of course, Americans have always believed that, as the song goes, “we are the world.”

More than a Mistake

In a more thoughtful Post consideration of 9/11, Carlos Lozado reviews many of the books that have come out in the last 20 years on what went wrong. In his summary, U.S. policy proceeds like a cascade of falling dominos, each one a mistake that follows from the previous and sets into motion the next.

Successive administrations underestimated al-Qaeda and failed to see signs of preparation for the 9/11 attacks. In the aftermath of the tragedy, the George W. Bush administration mistakenly followed the example of numerous empires in thinking that it could subdue Afghanistan and remake it in the image of the colonial overlord. It then compounded that error by invading Iraq with the justification that Saddam Hussein was in cahoots with al-Qaeda, was building up a nuclear program, or was otherwise part of an alliance of nations determined to take advantage of an America still reeling from the 9/11 attacks. Subsequent administrations made the mistake of doubling down in Afghanistan, expanding the war on terror to other battlefields, and failing to end U.S. operations at propitious moments like the killing of Osama bin Laden.

But to understand the rise of Donald Trump, it’s necessary to see 9/11 and its aftermath as more than just the product of a series of errors of perception and judgment. Implicit in Lozado’s review is the notion that America somehow lost its way, that an otherwise robust intelligence community screwed the pooch, that some opportunistic politicians used the attacks to short-circuit democracy, public oversight, and even military logic. But this assumes that the war on terror represents a substantial rift in the American fabric.

The 9/11 attacks were a surprise. The response wasn’t.

The United States had already launched a war against Iraq in 1991. It had already mistakenly identified Iran, Hamas, and jihadist forces like al-Qaeda as enemies linked by their broad religious identity. It had built a worldwide arsenal of bases and kept up extraordinarily high levels of military spending to maintain full-spectrum dominance. Few American politicians questioned the necessity of this hegemony, though liberals tended to prefer that U.S. allies shoulder some of the burden and neoconservatives favored a more aggressive effort to roll back the influence of Russia, China, and other regional hegemons.

The “war on terror” effectively began in 1979 when the United States established its “state sponsors of terrorism” list. The Reagan administration used “counter-terrorism” as an organizing principle of U.S. foreign policy throughout the 1980s. In the post-Cold War era, the Clinton administration attempted to demonstrate its hawk credentials by launching counter-terrorism strikes in Sudan, Afghanistan, and Iraq.

What changed after 9/11 is that neoconservatives could push their regime-change agenda more successfully because the attacks had temporarily suppressed the Vietnam syndrome, a response to the negative consequences of extended overseas military engagements. Every liberal in Congress, with the exception of the indomitable Barbara Lee (D-Ca), supported the invasion of Afghanistan, as if they’d been born just the day before. That just happens to be one of those side effects of empire listed in fine print on the label: periodic and profound amnesia.

In this sense, Trump is not a product of the war on terror. His views on U.S. foreign policy have ranged across the spectrum from jingoistic to non-interventionist. His attitude toward protestors was positively Nixonian. And his recourse to conspiracy theories derived from his legendary disregard for truth. Regardless of 9/11, Trump’s ego would have propelled him toward the White House.

The surge of popular support that placed him in the Oval Office, on the other hand, can only be understood in the post-9/11 context. Cyberspace was full of all sorts of nonsense prior to 9/11 (remember the Y2K predictions?). But the attacks gave birth to a new variety of “truthers” that insisted, against all contrary evidence, that nefarious forces had constructed a self-serving reality. The attacks on the Twin Towers and the Pentagon were “inside jobs.” The Newtown shootings had been staged by “crisis actors.” Barack Obama was born in Kenya.

The shock of the United States being so dramatically and improbably attacked by a couple dozen foreigners was so great that some Americans, uncoupled from their bedrock assumptions about their own national security, were now willing to believe anything. Ultimately, they were even willing to believe someone who lied more consistently and more frequently than any other politician in U.S. history.

Trump effectively promised to erase 9/11 from the American consciousness and rewind the clock back to the golden moment of unipolar U.S. power. In offering such selective memory loss, Trump was a quintessentially imperial president.

Even after the British formally began to withdraw from the empire business after World War II, they couldn’t help but continue to act as if the sun didn’t set on their domains. It was the British that masterminded the coup that deposed Mohammed Mossadegh in Iran in 1953. It was the British at the head of the invasion of Egypt in 1956 to recapture control of the Suez Canal. Between 1949 and 1970, Britain launched 34 military interventions in all.

The UK apparently never received the memo that it was no longer a dominant military power. It’s hard for empires to retire gracefully. Just ask the French.

The final U.S. withdrawal from Afghanistan last month was in many ways a courageous and successful action by the Biden administration, though it’s hard to come to that conclusion by reading the media accounts. President Biden made the difficult political decision to stick to the terms that his predecessor negotiated with the Taliban last year. Despite being caught by surprise by the Taliban’s rapid seizure of power over the summer, the administration was able to evacuate around 120,000 people, a number that virtually no one would have expected prior to the fall of Kabul. Sure, the administration should have been better prepared. Sure, it should have made a commitment to evacuating more Afghans who fear for their lives under the Taliban. But it made the right move to finally end U.S. presence in that country.

Biden has made clear that U.S. counterterrorism strikes in Afghanistan will continue, that the war on terror in the region is not over. Yet, U.S. operations in the Middle East now have the feel of those British interventions in the twilight of empire. America is retreating, slowly but surely and sometimes under a protective hail of bullets. The Islamic State and its various incarnations have become the problem of the Taliban—and the Syrian state, the Iraqi state, the Libyan state (such that it is), and so on.

Meanwhile, the United States turns its attention toward China. But this is no Soviet Union. China is a powerhouse economy with a government that has skillfully used nationalism to bolster domestic support. With trade and investment, Beijing has recreated a Sinocentric tributary system in Asia. America really doesn’t have the capabilities to roll back Chinese influence in its own backyard.

So that, in the end, is what 9/11 has changed. The impact on culture, on the daily lives of those not touched directly by the tragedies, has been minimal. The deeper changes—on perceptions of Muslims, on the war on terror—had been set in motion before the attacks happened.

But America’s place in the world? In 2000, the United States was still riding high in the aftermath of the end of the Cold War. Today, despite the strains of MAGA that can be heard throughout America’s political culture, the United States has become one major power among many. It can’t dictate policy down the barrel of a gun. Economically it must reckon with China. In geopolitics, it has become the unreliable superpower.

Even in our profound narcissism, Americans are slowly realizing, like the Brits so many years ago, that the imperial game is up.