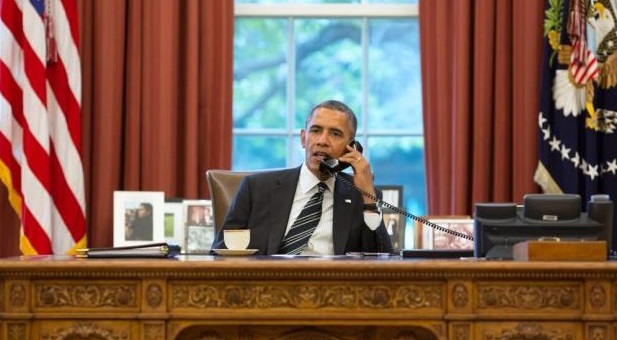 Is Diplomacy, Not War, Finally on the March in the Middle East?

Believe it or not, Western relations with Syria and Iran may actually be on track to diplomatic resolutions.
By Christopher Bolan | October 28, 2013

The Middle East is normally a depressing topic of conversation with talk of ongoing wars, repressive governments, ethnic violence, and terrorist attacks. Yet two of the region’s most troublesome challenges (Syria and Iran) are on diplomatic tracks toward peaceful resolution (although success is far from assured in either of these cases).

In late August, President Obama was poised to “take military action against Syrian regime targets” in response to a violation of his ‘redline’ against the use of chemical weapons. Within two weeks, however, the President reversed course and announced his cautious support for a diplomatic campaign born of an apparent off-the-cuff remark by U.S. Secretary of State Kerry suggesting that strikes could hypothetically be averted if Syria would take the unimaginable step of eliminating its chemical weapons arsenal. International diplomacy quickly began to turn this ideal fictional scenario into reality. Today there are scores of international experts deployed inside Syria who are actively inventorying and destroying Syrian chemical weapons.

This success demonstrates the practical utility of diplomacy in resolving tough security challenges and bolsters hope for a negotiated solution to issues surrounding Iran’s nuclear activities.

In early September Presidents Obama and Rouhani committed themselves to explore a negotiated solution to the issue of Iran’s nuclear program in complementary speeches at the United Nations. While hopes faded for a rumored face-to-face meeting in New York, the two leaders nonetheless capitalized on this positive momentum in a telephone conversation later in the month – the first direct communication between an American and Iranian president in over 30 years.

Nonetheless, all opportunities are ultimately fleeting. The history of U.S.-Iranian relations since the 1979 Islamic Revolution is littered with lost opportunities to repair this broken and tortured relationship.

Indeed, opponents to a negotiated solution today are already hard at work to undermine its prospects. Israeli President Netanyahu warns that Rouhani is merely a “wolf in sheep’s clothing.” He says that Israel will not be satisfied until Iran is stripped of any ability to enrich uranium. He has also renewed his threats to take unilateral military action in order to prevent Iran from acquiring an undefined “nuclear weapons capability.” Meanwhile, the U.S. Congress has sent conflicting messages to the President supporting diplomacy on the one hand; while seeking to impose even more severe sanctions and intensifying threats of a military strike, on the other.

Of these options, only a negotiated solution offers a reasonable prospect for achieving President Obama’s stated strategic goal of “preventing Iran from acquiring a nuclear weapon.”

Military Force: Military strikes targeting Iranian nuclear facilities are quite likely to damage U.S. interests and will not eliminate Iran’s nuclear programs. Iran’s civilian nuclear expertise and knowledge is substantial and can’t simply be bombed or assassinated out of existence. Its nuclear facilities are widely dispersed, heavily protected, and in some cases built deep underground so as to minimize exposure to air attacks. These factors lead security analysts to conclude that sustained American military airstrikes are at most likely to achieve a 1-4 year delay in Iran’s ability to produce a nuclear weapon. Additionally, attacks are likely to solidify the position of hardliners in Tehran as they exploit intense feelings of Iranian nationalism during a time of crisis. Military strikes will counterproductively bolster the case of those arguing that Iran needs a nuclear weapon to deter further attacks. Lastly, military action will strengthen the recruitment of radicals to the ranks of Al-Qa’ida by playing into its strategic narrative that the United States is at war with Islam.

Sanctions: The status quo policy of isolation and sanctions has certainly been successful in bringing additional pressure on the Iranian government to come to the negotiating table. However, history suggests that this policy is not sustainable over time. Iran’s substantial oil reserves and a global economy still thirsty for fossil fuels create irresistible incentives for countries like China, Japan, and India to avoid rigorous enforcement of any sanctions regime. Additionally, international support for stringent sanctions will inevitably fade as the suffering inflicted on the Iranian people becomes more apparent.

Moreover, continued stalemate has only weakened the U.S. negotiating position. As Iranian expert Ali Vaez recently noted, at the time of Iran’s voluntary suspension of uranium enrichment in 2003 “Iran had one enrichment facility, one type of centrifuge, no fissile material stockpile and sought to enrich uranium to 5 percent.” Today, despite being subjected to a decade of intensified sanctions, Iran is enriching uranium at both the 5 percent (for energy production) and 20 percent levels (for medical research & treatment), has tens of thousands of centrifuges, has accumulated a significant stockpile of low-enriched uranium, has constructed an extensive underground uranium enrichment facility at Fordow that is resistant to air attack, and has embarked on a program to enrich plutonium as well.

As the case of North Korea demonstrates, economic sanctions and international political isolation will not prevent a determined country from developing nuclear weapons. With sanctions biting in Tehran, now is precisely the right time to execute a strategic shift to serious negotiations that exchange sanctions relief for voluntary and verifiable restraints on Iran’s nuclear activities.

Diplomacy: Meetings with Iranian officials in Geneva earlier this month provide cause for optimism that a negotiated resolution is attainable. One Obama official participating in the talks said that “I have never had such intense, detailed, straightforward, candid conversations with the Iranian delegation before.” The European Union’s top negotiator echoed these favorable sentiments characterizing the talks as “very useful.” Meanwhile, Iran’s head negotiator described the talks as “serious” and observed they had been conducted in a “highly positive atmosphere.”

Despite these positive signals, it will be easy to fall prey to the distrust that has accumulated over the past three decades in Washington and Tehran. Creative and courageous leaders will need to flush out a detailed agreement that satisfies the basic economic and security interests of all parties. For Iran, diplomacy is the only realistic course leading to the meaningful easing and eventual lifting of international sanctions. Meanwhile, for Western powers, a negotiated deal in which Iran willingly submits to limitations on its civilian nuclear program offers the best practical assurance that Iran does not eventually seek to develop a nuclear weapon.

Most significantly, however, is that successful diplomatic resolutions on Syria and Iran could well set the stage for a peaceful solution to one of region’s most enduring and stubborn conflicts – the Israeli-Palestinian conflict.

Christopher J. Bolan, Ph.D., Col. (R), U.S. Army, is a Professor of National Security Studies at the U.S. Army War College. During his military career, he served as a foreign policy advisor to both Vice Presidents Gore and Cheney on Middle East issues. The views expressed are his own and do not necessarily reflect the positions of the U.S. government.