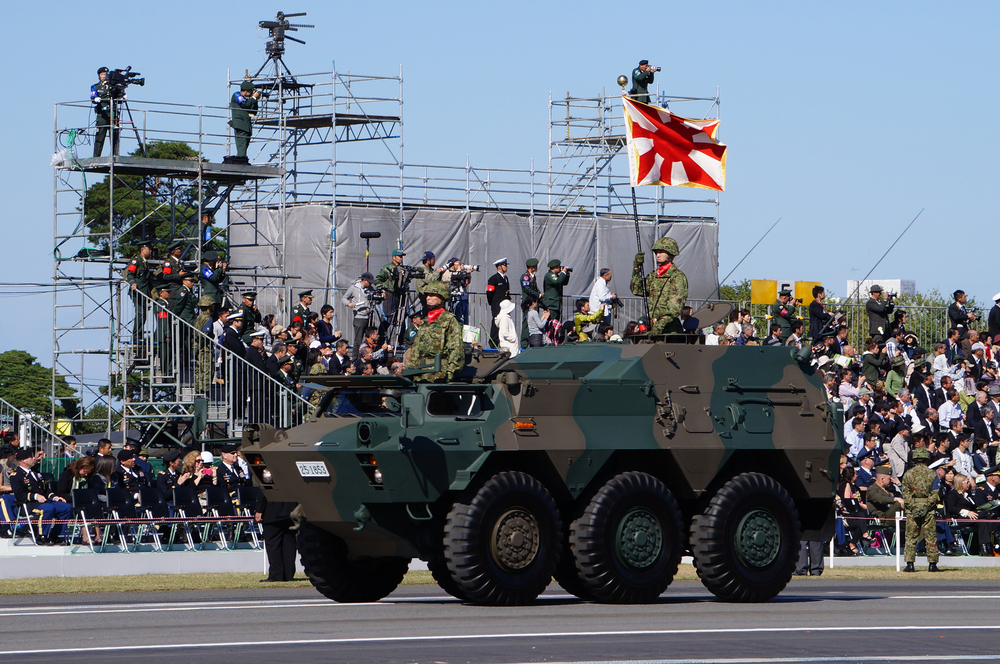 Inspection parade of Japan Ground Self Defense Force in Asaka base, Tokyo (Shutterstock)

Does Japan Aspire to be a Superpower?

Despite its "peace constitution," Japan has a growing military footprint.
By Alec Dubro | January 3, 2022

In early November, the German Navy frigate Bayern docked in Japan after two days of exercises with the Japanese Maritime Self-Defense Force destroyer Samidare.  No, it’s not the reestablishment of the Axis Powers, but it’s still significant.

“The Indo-Pacific is today one of the strategically most important regions of the world,” Gen. Eberhard Zorn, chief of Germany’s armed forces said at a Tokyo press conference. “Here, important decisions over freedom, peace and well-being in the world are being made. Deploying our frigate to the Indo-Pacific makes clear that Germany stands up for our common values.” In other words, the Germans are doing their part to contain China, just as the British, French and Dutch have done. And, of course, the Americans.

The Japanese Self-Defense Forces have been described as the world’s fifth most powerful military. In November 2021, Japan’s military budget of $47 billion was supplemented by an additional appropriation of $6.7 billion. Prime Minister Yoshihide Suga and the ruling LDP had pressed for the supplement because of the ongoing threats not only from China but Russia and North Korea.

This comes as no surprise to the Americans. In their April high-level meeting in Washington, both Suga and President Biden declared their intention to increase Japan’s national defense capabilities to “further strengthen the US- Japan alliance and regional security.”

Regional security implies a strategic force, something that flies in the face of Japan’s 1947 Peace Constitution. That basic document is quite explicit in its dedication to world and regional peace. Its Article 9 reads:

Aspiring sincerely to an international peace based on justice and order, the Japanese people forever renounce war as a sovereign right of the nation and the threat or use of force as means of settling international disputes.

In order to accomplish the aim of the preceding paragraph, land, sea, and air forces, as well as other war potential, will never be maintained. The right of belligerency of the state will not be recognized.

Yet that stunning declaration by the nation that ravaged East and Southeast Asia, as part of a document forced upon Japan by the American Occupation, has been eroding since the day ink was committed to paper. Presently, Japan has a larger military budget than either France or the UK, and it continues to grow. Japan now openly admits its intention to militarily engage in the defense—whatever that means—of its littoral waters and its remote islands, most of which China claims. These Japanese-controlled islets in the East China Sea are called the Senkakus in Japanese and the Diaoyu in Chinese. But Tokyo is also quite open about its goal to become a major player in the East and South China seas, as well as the rest of the Western Pacific.  This apparently has the blessing of the Pentagon.

Following his April 2021 meeting in Washington with President Joe Biden, new Japanese Prime Minister Fumio Kishida said “that he received a “strong” message from the U.S. president of the “U.S. commitment to defending” the Senkakus. The statement lacked specifics, probably because the United States doesn’t quite know what such a defense would look like.

Currently, Japan has 150,000 active ground forces, including 50,000 in the Maritime SDF (as well as 150 ships and 350 aircraft) and 50,000 air force personnel. That’s more military personnel that either Britain or France. In addition, November’s extra appropriation goes to purchasing American surface-to-air missile (SAM) systems and other high-tech apparatus as well as more prosaic maritime patrol aircraft, naval mines, torpedoes, and other hardware. All of which goes toward countering North Korea’s missile-threatening misbehavior and China’s encroachment on Japan’s mostly uninhabited western Pacific islands.

However, budget numbers don’t necessarily reveal a military’s effectiveness. The trouble is, the JDF has relied mainly on Japanese equipment, and that equipment is both outdated and expensive. For instance, the tanks displayed at a much-ballyhooed Hokkaido set of public maneuvers recently were 30 years old. This not only puts the JDF at a battlefield disadvantage, but it cuts into Japan’s arms sales worldwide. According to defense expert Heigo Sato, speaking to the AP: “The problem is, Japan’s defense products are not first grade. Nobody is interested in buying second- or third-grade products at higher prices.”

Moreover, Japan is also hampered by its sub-optimal relationship with its nominal anti-China ally, South Korea. The Koreans are perennially seething over Japan’s failure to adequately make amends for its wartime treatment of its then-colony, with the Japanese saying in one form or another, “Get over it.”

On the other side, China has a much larger army and probably the world’s largest navy. But a huge defense budget alone is not a reliable measure of power, according to Richard Samuels, director of MIT’s Japan Program and of its Center for International Studies. Said Samuels, “Japan is unlikely to be ever be able to deter China on its own (short of nuclear breakout), and is therefore being diligent in hugging the US and cultivating relations with other countries in the region—and, you will have noticed, in Europe as well.”

And then there’s the pesky matter of Japan’s Peace Constitution which, while often creatively interpreted, still remains in effect. In short, although the Japanese right wing is all for reclaiming an aggressive military, it’s not at all clear that the general population will want to follow. Sabine Frühstück, chair in Japanese Cultural Studies at University of California in Santa Barbara, raised that point: “No matter who you speak to, I’d ask whether they believe that Japan’s young men and women would be willing to go to war should there be a conflict once it becomes a reality.” Especially over a few desolate rocks on the maritime border of Japan and China.

It’s not just a question of will. There’s also the matter of a declining population. In 2020, according to the Strategic Studies Institute, US Army War College:  “The lack of manpower imposes a structural constraint on Japan’s ability to expand its military, even if resources were available for a major buildup. Personnel levels for the SDF have stayed stagnant since the end of the Cold War. More worrisome, the SDF has struggled to fill its ranks.”

I’m not taking bets on whether the Japanese are willing to risk their still-prosperous and well-ordered civilization over the remnants of their once vast Pacific empire—even with the United States and the one-boat German Navy at their side.

Apparently, Tokyo is willing to hedge its bets. On December 28, The Japan Times wrote: “Defense Minister Nobuo Kishi said Monday that he agreed with his Chinese counterpart Wei Fenghe on opening up a hotline between their officials amid tensions over disputed islets in the East China Sea.”

But neither China nor Japan appeared willing to concede any territorial claims.