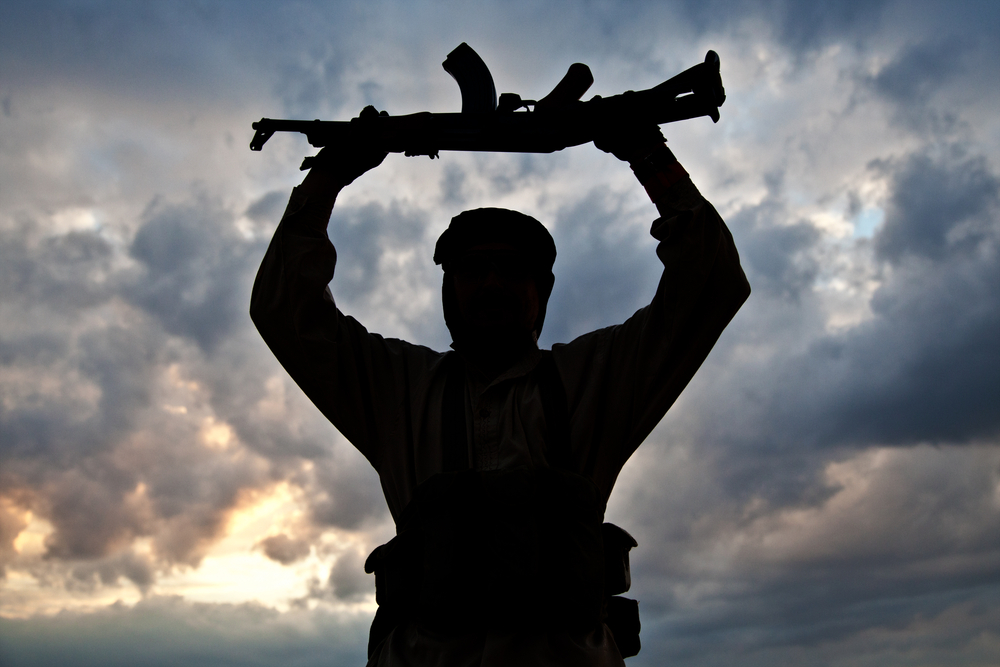 Does the Future Belong to the Taliban?

Afghanistan is not the only place at risk of takeover by extremists.
By John Feffer | August 18, 2021

It’s as if a sudden natural disaster has just struck Afghanistan.

The scenes from the capital Kabul reflect the kind of panic that comes when a Category 5 hurricane makes landfall, when the waters rise and the levees are breached, when a forest fire jumps over a fuel break to spread out of control.

The Taliban victory this past weekend was not a complete surprise. The news had been full of warnings of their territorial advance, and pundits had worked hard to out-Cassandra one another with their pronouncements of impending doom.

And yet no one expected the sky to fall quite so quickly.

The Biden administration had been expecting at best some kind of power-sharing agreement and at worst a few months to prepare for the fall of Kabul. In the end, the Taliban needed only a few days to go from seizing the last provincial capitals to marching into the Afghan capital and occupying the presidential palace this weekend. Also unexpected was their method. They accomplished this blitzkrieg as much with political persuasion as military force—by negotiating surrender agreements with Afghan army and government officials in the areas where they were advancing.

The Biden administration has tried to reassure the American people that it is presiding over an orderly response. The media, however, has depicted a street-level reality of chaos. The international airport in Kabul, where the United States is making its last stand, has been the last hope for many Afghans who fear that their collaboration with the Americans, their support for human rights, or even just their style of dress will earn them a jail sentence or worse. They are desperate to get on the last flights out, even to the point of clinging to the fuselage of a departing U.S. plane.

Until we get full eyewitness reports, the best description of the catastrophe in Kabul comes from Viet Thanh Nguyen’s novel The Sympathizer, which has a harrowing section on the last-minute scramble of South Vietnamese to get on American transport planes as Saigon was falling in 1975.

“The plane was a garbage truck with wings attached, and like a garbage truck deposits were made from the rear, where its big flat cargo ramp dropped down to receive us,” Nguyen writes of the C-130 Hercules and its open compartment.

Adults squatted on the floor or sat on bags, children perched on their knees. Lucky passengers had a bulkhead berth where they could cling to a cargo strap. The contours of skin and flesh separating one individual from another merged, everyone forced into the mandatory intimacy required of those less human than the ones leaving the country in reserved seating.

From the Western perspective, this exodus is the result of an unnatural disaster, an armed band of religious fundamentalists that have seized Afghanistan and are determined to drag it back to the Middle Ages. They have little professed interest in democracy, human rights, or pluralism. The last time they were in charge in Kabul, they presided over a theater of cruelty: stoning, floggings, amputations, executions. This last week, in the territories they grabbed on their way to taking power, the Taliban enlisted child soldiers, rolled back the rights of women, and restricted free expression, showing little sign that they’d updated their style of governance.

The velocity with which the relatively modest number of Taliban (75,000) swept aside the Afghan national army (300,000) is reminiscent of the sudden expansion of the Islamic State throughout Syria and Iraq in 2014. Then, too, U.S. allies in the region proved no match for a highly mobile and fiercely dedicated group of insurgents. The United States and its allies, deeming this so-called caliphate a risk to the region and the global order, conducted an all-out war that culminated in the Islamic State’s defeat.

As the presumed linchpin in the war on terror, Afghanistan once commanded similar attention from Washington. But that was 20 years ago, and the United States is now leading the charge for the exit. In recent months, the Biden administration downplayed the risk of the Taliban taking over the country—on July 8, the president said that “the likelihood there’s going to be the Taliban overrunning everything and owning the whole country is highly unlikely.” The Pentagon, meanwhile, was arguing back in June that the risk of the country again playing host to terrorist organizations was only a “medium” risk, with Pentagon chief Lloyd Austin maintaining that “it would take possibly two years for them to develop that capability.” The Pentagon is now in the process of “reassessment.”

The Taliban are now more firmly control of the entire country than they were back in the late 1990s. It’s not just the Afghan national army that has given up. It seems like the country’s entire civil society is trying to get out as soon as possible. But that also demonstrates how different the country has become. When the Taliban were last in charge, there was barely any civil society.

The images from Kabul might seem horrifying, but you reassure yourself by saying that all of this is very far away. Also, the Taliban don’t have global ambitions. What happens in Afghanistan, stays in Afghanistan.

Next Steps for Afghanistan

Stalin once complained that imposing the Soviet model on the Poles was like “saddling a cow.” The Catholic Church remained a powerful force in communist Poland, and Polish farmers put up so much resistance to collectivization that the land remained largely in private hands. It took more than 40 years, but the cow eventually threw off its saddle.

Surely Western efforts to liberalize Afghan society can’t be compared to the attempted Stalinization of Poland: different times, different ideologies. But the Soviets, too, thought that they were bringing modern civilization to the benighted Poles. Similarly, the United States believed that it could drag Afghanistan kicking and screaming into the twenty-first century. It found willing partners: a government, an army, a lot of NGOs.

Consider just one indicator of modernity: the rate of literacy. In Afghanistan, less than 20 percent of the population could read in 1979. By 2018, that rate had grown to 43 percent. On the one hand, that’s a big jump. On the other hand, Afghanistan continues to have one of the worst literacy rates in the world, well below Sudan and Yemen. Compare Afghanistan’s current literacy rate to that of Iraq (86 percent), Iran (86 percent), and Syria (81 percent) and you can understand the utter presumptuousness of U.S. efforts to modernize the country.

A thin layer of human rights activists did manage to do some extraordinary work in Afghanistan. But if you listen to this interview on the new podcast Strength & Solidarity with Shaharzad Akbar, the chairperson of Afghanistan’s Independent Human Rights Commission, you can hear the frustration in her voice as she talks about dealing with the entrenched interests and the outright corruption in her country. She has continued to do her work up to the last minute, reporting on the Taliban’s human rights abuses in the territories it was capturing. She tweets on latest developments here.

Anyone like Akbar who might form a domestic opposition to the Taliban has emigrated, is trying to leave, or is lying very low. Protests have broken out, including one in Jalalabad that the Taliban shut down by firing into the crowd of demonstrators, killing three. Pushback will come in other forms as well. Relying primarily on support from the Pashtun community, the Taliban will face resistance from other ethnic groups. It may also have to deal with doctrinal disagreements with other Islamic forces in the country. But the Taliban can make up for any deficit in popularity with its capacity for total ruthlessness.

At the same time, this is not the same Taliban that ruled 25 years ago. A number of the current leaders have negotiated with U.S. representatives in Doha, and they’ve met with numerous foreign leaders. In late July, Chinese Foreign Minister Wang Yi welcomed a delegation of Taliban officials in Tianjin, which suggests that both sides are willing to compromise after some significant disagreements over what constitutes religious extremism. With the United States blocking the Taliban from accessing billions of dollars in Afghan reserves held in U.S. banks, Kabul will increasingly rely on China for capital and technical expertise. Beijing will be happy to provide that capital without the pesky political strings that the West attaches, though it will likely demand other quid pro quos, like access to the riches that lie beneath Afghan soil.

Some form of rapprochement with the West is not impossible. The Taliban, after all, have learned how to craft messages that resonate in Western capitals. “We are committed to working with other parties in a consultative manner of genuine respect to agree on a new, inclusive political system in which the voice of every Afghan is reflected and where no Afghan feels excluded,” wrote Sirajuddin Haqqani, a deputy leader of the Taliban, in The New York Times last year.

I am confident that, liberated from foreign domination and interference, we together will find a way to build an Islamic system in which all Afghans have equal rights, where the rights of women that are granted by Islam—from the right to education to the right to work—are protected, and where merit is the basis for equal opportunity.

Taliban spokesmen have echoed these same phrases in some of their recent statements as well. There is no consensus on political and economic issues within the Taliban leadership. Ousting the foreign powers will soon seem easy in comparison to running a country where the citizens, even if mostly illiterate, have different expectations of the state than they did 25 years ago.

Those within the leadership who favor rapprochement with the West will only prosper politically if they can point to some reciprocal interest. The Biden administration should not, in Afghanistan, repeat its mistake of letting reformists twist in the wind, as it has done in Iran.

Will the Taliban Take Over the World?

The Taliban represent a powerful strand in Afghan society: fiercely anti-colonial and distrustful of the West. They are not alone. These sentiments can be found throughout the region. The mullahs in Iran and the crown princes in Saudi Arabia, despite their many mutual disagreements, have their own versions of this ideology. Given their historical experiences, who can blame them.

We also make a fatal category error when we assume that fundamentalism is somehow a Middle Eastern or Islamic character flaw. Outside the region, you can find the Taliban wherever people gather in the name of rejecting modern politics in favor of tribal affiliations, decrying the permissiveness of liberal culture, and elevating religious dogma to the single principle governing society.

So, let’s stop all the hand-wringing about the barbarians massing at the gates of the West. Whether it’s Steve Bannon, Robert F. Kennedy Jr., or Jim Dobson, the barbarians have been inside the gates all along.

The U.S. war in Afghanistan is over. Let’s now focus on the fight against these homegrown extremists.

John Feffer is the director of Foreign Policy In Focus. His latest play is Clowntime.