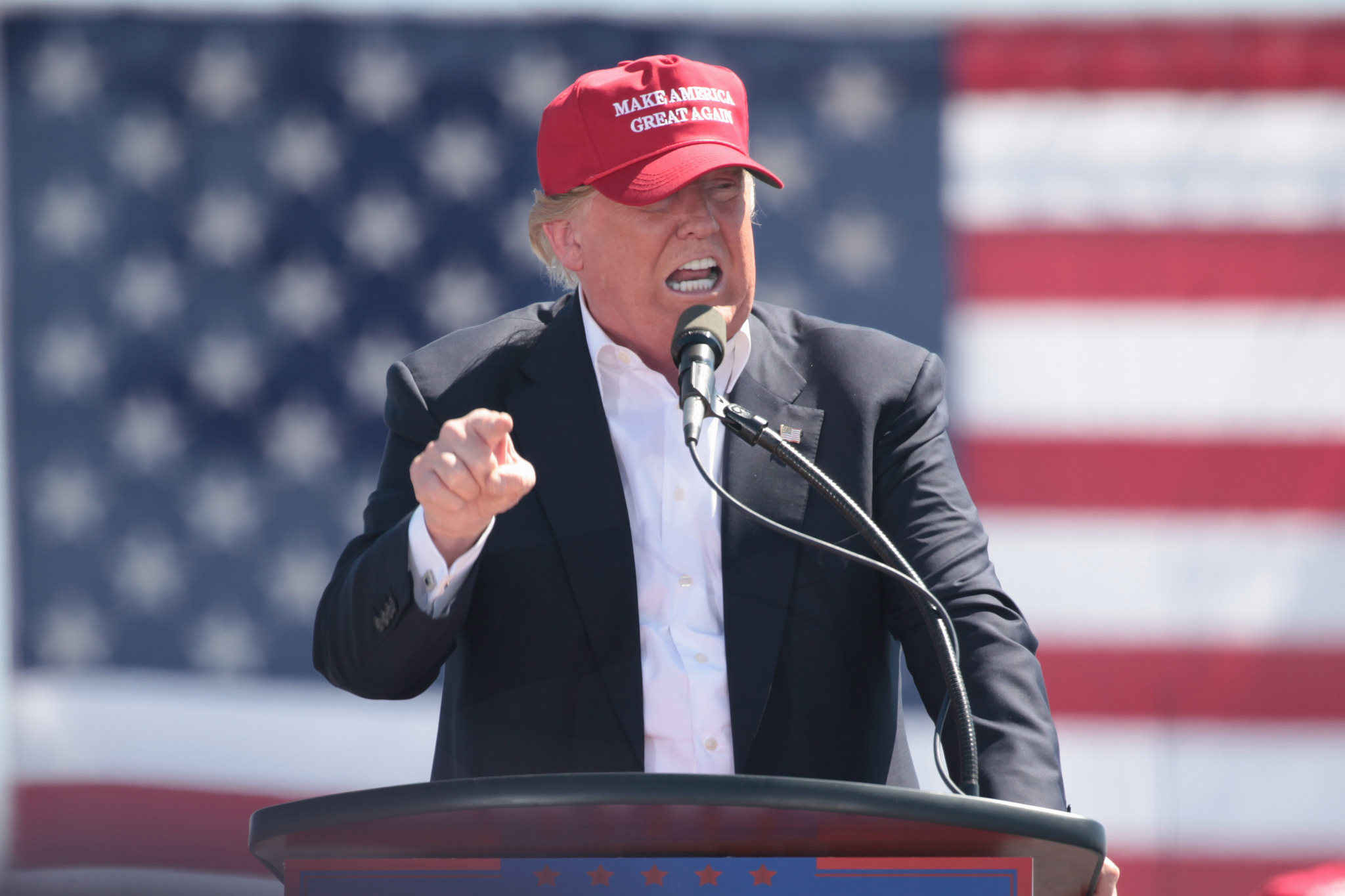 Donald Trump may be a bigot and a bully, but it's hard not to applaud when he pisses off the stuff shirts at the Washington Post. (Photo: Gage Skidmore / Flickr)

It might take someone of Trump’s vapid visibility to drive home the point that "world’s policeman" is not a viable role for the U.S. to play.
By John Feffer | March 30, 2016

He wants to cut back on U.S. military commitments overseas. He calls the Iraq War “one of the worst decisions ever made in the history of our country.” He promises to make deals with America’s adversaries. He’s comfortable with the détente with Cuba.

And he really pisses off the stuffed shirts at The Washington Post.

Well, a great deal, of course. The man is an incoherent, misogynistic bully. But his foreign policy vision, a kind of fun-house version of Reaganism, is upsetting Beltway mandarins, shaking up the Republican Party, and pointing to a potential rupture in the informal liberal-conservative consensus on foreign policy that has prevailed in Washington since the end of the Cold War.

It’s hard not to enjoy a frisson of schadenfreude watching Trump tear through the conservative mainstream like Jack the Ripper at a Heritage Foundation tea party.

For all his earlier flirtations with the Democratic Party, the Donald is a product of the same right-wing extremism that has flushed moderates out of the Republican Party, reduced political discourse to a debate over the relative size of bank accounts and genitalia, and revealed “politically incorrect” talk to be naked racism, sexism, and xenophobia. Trump is a rogue elephant, and he might just lead the entire herd over the electoral cliff. It’s a drama that’s almost Shakespearian in its combination of low comedy and fratricidal bloodletting.

I was confident back in August that Trump could win the Republican primary, because his messages were perfectly tailored to 95 percent of self-identified Republican primary voters (i.e.: conservative white people). I suspected that he wouldn’t crash and burn because the more he pissed off those outside his core demographic, the more his supporters believed that he was an authentic truth-teller.

I am equally confident that Trump will go down in flames during the general election, even if the Democratic Party chooses neither Clinton nor Sanders but instead fields a toaster oven as a candidate.

When the neo-fascist Jean-Marie Le Pen won a surprising second-place finish in the first round of the French presidential elections in 2002 — capturing 16.86 percent of the vote to Jacques Chirac’s 19.88 percent — virtually all of French society came together to defeat the monster. In the second round, Chirac racked up 82.2 percent of the vote to Le Pen’s measly 17.7 percent.

The gap won’t be nearly as large in a showdown with Trump. But whatever reservations people might have about Hillary Clinton’s emails, Bernie Sanders’s socialism, or the toaster oven’s lack of sentience, the idea of Donald Trump controlling the nuclear football will send a clear majority of voters running screaming to the polls to cast their anti-Trump ballots. In addition, many Republicans will simply stick their heads in the sand on Election Day until, they hope and pray, the problem goes away.

The real question is: Will the problem go away even after Trump slinks back to his New York City penthouse?

According to one strain of thought, Trump will leave behind no mark on politics because he’s a one-of-a-kind disrupter. American politics, bruised by the new low bar it had to shimmy under, will nevertheless return to its previous state of subservience to more predictable corporate and geopolitical interests.

But the mainstream is worried, and not just about the prospect of Trump turning the White House into just another jewel in his real-estate crown.

America’s very leadership in the world is at stake, argues Fred Hiatt, who came away clearly shaken from a recent Washington Post editorial board meeting with the Republican Party candidate. The tradition of “U.S. leadership, beginning with presidents such as Truman and Kennedy, Reagan and Clinton…stands in danger today,” Hiatt wrote this week. He was clearly not pleased to hear about Trump’s preference to see the United States disengage, however modestly, from its overseas military commitments.

After all, it’s not just Trump who is pummeling America’s tradition of leadership, Hiatt argues. It’s a one-two punch, with President Obama delivering the other blow. The so-called political center is worried that Trump is tapping into a much deeper sentiment that the president has also been cultivating of late: a desire to see America withdraw from the world.

It’s amusing to read the transcript of the Post’s confab with Trump. It could have been written by the recently departed Garry Shandling, the master of stand-up who brought cringe comedy to the small screen with It’s Garry Shandling’s Show in the 1980s. Trump, with all his bloated self-importance, sounds like someone Shandling might have created solely for the purpose of skewering.

The Post staffers seemed as if they couldn’t quite believe what they were hearing. They were thrown by the candidate’s flagrant bombast and refusal to play by the rules of the game. The Post editors expected a round of bridge. Instead, Trump brought a Louisville Slugger to the game.

HIATT: Well I guess the question is, does the United States gain anything by having bases?

HIATT: So you don’t think the U.S. gains from being the force that sort of helps keep the peace in the Pacific?

TRUMP: I think that we are not in the position that we used to be. I think we were a very powerful, very wealthy country. And we’re a poor country now. We’re a debtor nation.

Trump’s description of the United States as a “poor country” elicited an immediate rebuke from Robert Samuelson, again in the Post. But Trump’s essential point, that perhaps the United States can’t quite afford to garrison the globe — when U.S. infrastructure is falling part and large communities are mired in poverty — remains an important one. He also wonders why the United States lavishes funds on Saudi Arabia, why European allies don’t pay more for NATO, and why our adversaries are using our own weapons against us — all legitimate questions.

But it’s the way he lays out his arguments that confounds his interlocutors. The fact that he has great relationships with South Korea is irrelevant. And he avoids any discussion of Asian security — probably because he can’t tell a Dokdo from a Senkaku. As MSNBC’s Andrea Mitchell points out, Trump’s conversational gambits are designed to conceal his own vast ignorance. “When he doesn’t know something, he just changes the subject, and makes it all about himself,” she observes.

In this way, Trump is Chance the Gardener, but instead of gardening, he talks about himself. No one misinterprets this as profundity, as they do when Chance becomes a media celebrity in Jerzy Kozinski’s novel Being There. But it’s a strategy perfectly designed to throw opponents off guard and prevent them from challenging his positions. Trump doesn’t even pretend to play the same game.

As the Donald might say, he’s in a league of his own.

But let’s focus on the heart of the matter — Trump’s challenge of the bipartisan consensus that the United States should lead the world.

Democrats and Republicans disagree about many things. But with a few exceptions they all support an enormous military budget, an expensive overseas expeditionary force, and unilateral acts of force when necessary to protect U.S. national interests (understood broadly).

It’s an odd paradox that Trump, who blathers on about making America great again, departs from this consensus. Probably as president, he wouldn’t. But he’s decided that, as an electoral strategy, bringing the war dollars home to rebuild America is popular among those who have largely lost out during the tech booms, the real estate booms, the financial booms, and all the other economic bubbles that have helped redirect money from the struggling middle class and the working poor to wealthy professionals and a few magnates (like Trump himself). That voters support someone who so clearly doesn’t represent their economic interests speaks not to their stupidity but to the obvious lack of anyone else in either party who actually cares about the interests of those left behind.

Bernie, you say? Yes, but he’s only been a Democrat for a tiny percentage of his political career. Indeed, he made a name for himself in Vermont by opposing Democrats, and aligning himself with Republicans if necessary. Unions have dwindled in membership. Progressives command little respect within the Democratic Party. And the Republicans long ago became the party of oligarchy.

This is really what the political mainstream is worried about — not that Trump will win. Or that Hillary Clinton will decide somehow to pursue Obama’s legacy of disengaging from the Middle East, which he articulated in some detail in a set of interviews with The Atlantic’s Jeffrey Goldberg. Neither of these scenarios will play out. Trump will lose; Hillary firmly supports the foreign policy status quo.

No, the mainstream is worried that the political parties will realize that the “bring the war dollars home” message can win a national election and disrupt the comfortable revolving-door consensus. Perhaps Elizabeth Warren will run on this platform in 2020. Perhaps the Republican Party, which will fracture as a result of Trump’s current suicide bombing attempt, will reform around its older, more isolationist tradition.

Before that happens, of course, we’ll have to endure a very ugly election followed by four years of foreign policy as usual. The United States will continue its drone attacks, its selective interventions, its costly alliances. Meanwhile, America will continue to implode structurally, the population becoming even further polarized politically and economically. The essential choice — to refocus national energies on rebuilding the economy at home or to wage endless conflict overseas — will be put off until 2020.

Trump is a terrifying figure. But he may prove to be a useful idiot. It probably takes someone of Trump’s vapid visibility to drive home the point that “world’s policeman” is not a viable role for the United States to play. Eventually, someone with a bigger brain and a smaller ego will pick up this message, run with it, and win big at the polls.

John Feffer is the director of Foreign Policy in Focus.