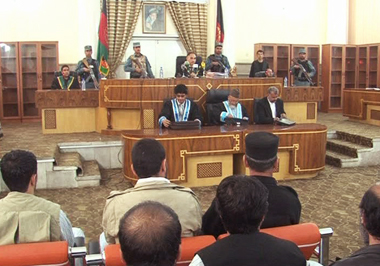 Afghan justice is buried three sub-basements down.
By Russ Wellen | May 14, 2014

In the New York Times, Rob Nordlund has been covering the story of young Afghan couple Zakia and Mohammad Ali, who, after eloping in March, have been on the run from her family. Since Zakia refused her father’s first choice for a husband, they fear her family will make her the victim of an “honor” killing. On May 3, in a piece about them and a young woman who was the apparent victim of an honor killing, he wrote:

Neither Amina nor Zakia and Mohammad Ali did anything against the law — or, more specifically, against two of the legal systems in effect in Afghanistan: the body of civil law enacted over the past decade with Western assistance, or the classic Islamic code of Shariah that is also enshrined in law. Both protect the rights of women not to be forced into marriage against their will.

Then how do those who commit these murders, for which they’re seldom arrested and tried, get away with it? In Afghanistan, explained Nordlund

As you can see, justice is buried three levels down. One is left to wonder how, if they’re following neither civil law nor religious law, they can call themselves judges? Apparently, they’re not what’s thought of as a judge in the developed world. Nordlund again.

… in many places, judges are poorly educated — a majority do not have actual law degrees, and a significant percentage have not even finished high school — a situation that continues to exist, despite $904 million in “rule of law” funding from the United States alone between 2002 and 2010, much of it earmarked to improve the judiciary.

It’s bad enough when a society is encumbered with judges who decide which laws they wish to observe. Even worse ― and making a mockery of the concept of cultural relativism ― is when a segment of society believes that a woman who refuses to marry who her family designates or who takes a lover outside her marriage is bringing more dishonor on her family than the family members who kill and support her killing.