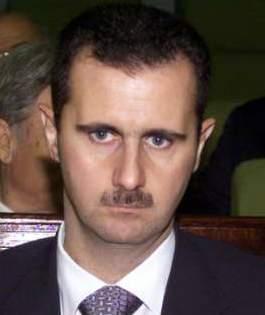 The protests in Syria are encouraging, but Bashar al-Assad will pull out all the stops before he leaves voluntarily.
By Daniel DePetris | May 11, 2011 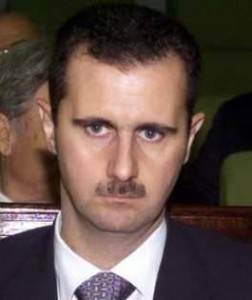 When Yemen’s Ali Abdullah Saleh finds himself in jeopardy of being defeated by his own countrymen, the United States and its European partners tend to shudder at the thought of losing a valuable ally. For years, Washington has used Arab despots like Saleh to advance U.S. security interests, particularly in the realms of counterterrorism and intelligence cooperation. But when a man like Syria’s Bashar al-Assad starts to feel the same heat from the current wave of popular protest transforming the Middle East, Washington and its allies are conflicted.

Indeed, the demonstrations in Syria could not have come at a more awkward time for President Barack Obama’s Middle East team. Over the past two years, the White House has attempted to recalibrate its Syria strategy from the Bush years, when isolation, condemnation, and sanctions were the hallmarks of U.S. policy. Shortly after his inauguration, Obama dispatched senior officials in his National Security Council to meet with the Syrian foreign ministry for a much-needed “icebreaker” in relations. Senator John F. Kerry (D-MA), chairman of the Senate Foreign Relations Committee, also met with Assad directly. That meeting produced good will between both sides on issues of mutual interest, such as Iraqi security and counterterrorism cooperation. The thaw in relations peaked with the nomination of Robert Ford in 2010 as U.S. ambassador to Syria, the first American diplomat in five years to live on Syrian soil.

Some former U.S. officials, particularly those that demonized Syria during the Bush years, are thrilled by the turn of events. Elliot Abrams, the man responsible for President George W. Bush’s Middle East policy at the National Security Council, has forcefully come out against the current pragmatic U.S. policy toward the Syrian leader, proposing that Washington instead focus on “

seeing a barbaric dictatorship replaced by a democracy, having Iran weakened by the loss of its only Arab ally, and celebrating the end of a regime that helped jihadis kill hundreds and hundreds of American servicemen and women in Iraq.”

Others in Washington have taken a more nuanced and cautious approach toward Assad. Andrew Tabler, a Syrian specialist at the Washington Institute for Near East Policy, wrote recently that a classic carrot-and-stick dichotomy may edge Assad closer to dialogue. And with a little economic pressure along the way, Assad’s regime might move away from Iran and align closer with Western objectives in the region:

“Pressure alone, much like engagement alone, will not be enough to change Assad’s policies. Both stand a far better chance of being effective if used in concert. That requires focus and creativity: two things Washington’s Syria policy has historically lacked.”

Regardless of which side of the pragmatists-versus-idealists debate one falls on, the United States and its allies must take some position and soon. Since 1979, the Syrian government has deepened its political alliance with Iran, a relationship that provides Tehran with a connective corridor to Lebanon and a useful beachhead in Arab politics. Syria’s well-documented alliance with Hezbollah in Lebanon allows Assad’s security services to control Lebanese affairs in an efficient yet behind-the-scenes manner. The political leadership of Hamas is located (and perhaps protected) in Damascus, far away from the extensive arms of Israel’s intelligence apparatus. Syria also happened to be a central haven for Sunni militants traveling to Iraq to fight the U.S.-led occupation. Indeed, U.S. diplomats have publicly acknowledged in congressional testimony that many of al-Qaeda’s recruits often took advantage of Syria’s porous eastern border.

All of this evidence would seem to indicate a universal acceptance in the United States of adopting a strong and visible anti-Assad policy. Yet Syria, much like the Middle East generally, is a complicated place. The country’s demographics, Assad’s relative popularity inside Syria, and the sectarian violence that could unfold if Assad were to fall should give all of those rooting for his demise second thoughts.

Although Syria is poor in resources with little to no oil reserves, the country nevertheless holds a strategic position in the region. Surrounded by Israel, Iraq, Turkey, Jordan, and Lebanon, Syria is key to Middle Eastern stability. Indeed, all of the major security issues in the Middle East today — the Palestinian question, Iranian intransigence, the stability of Lebanon and Iraq — are all tied directly to Syria in some way.

Syria’s population is approximately 22 million, more than 70 percent of whom are Sunnis spread out across the country’s major cities and rural areas. Assad and his family, however, are members of the minority Alawite sect, a small order of Shia Islam that some but not all Sunnis in the Middle East regard as heretical to the faith.

This Alawite sect, representing only 12 percent of the population, dominates Syria’s political establishment. Unlike the Egyptian and Tunisian militaries, which were both relatively professional and beholden to the people, the Syrian military and the intelligence apparatus is stocked with Alawite generals and intelligence officers, all of whom owe their positions to the Assad dynasty and retain a deep affinity for the current regime. The Alawites running Syria’s ministries and intelligence networks have just as much to lose as the ruling family if the Syrian people continue to build upon previous protests and expand into other areas of the country. A Syrian local perhaps said it best in an interview with The Economist: “They [the security services] provide security for the regime, not the state. They will never defect.”

Although that statement may sound simplistic, it is not necessarily inaccurate. Christians, Ismaili Shias, Druze, and especially Alawite Shias know all too well what could happen if the Assad regime fell and a Sunni-led government took over in its place. Should a Sunni leadership emerge, the power, prestige, and financial benefits that Alawite officers take for granted would likely decrease substantially. Indeed, a new, Sunni-led government in Syria would likely take revenge on their Alawi countrymen for their numerous crimes of oppression over the past 40 years. The infamous 1982 massacre in Hama, while certainly the most graphic illustration of violence against Sunnis, is but one case in a long line of abuses.

Assad is also relatively popular inside his country, at least when compared to other autocrats in the region either facing similar internal challenges or who have already been deposed. Assad may not be the most enlightened political leader in terms of Western democracy, but many Syrians nevertheless consider him a reformer, particularly when compared to other figures in the regime, such as the president’s brother, Maher al-Assad, who is the commander of Syria’s most ruthless army division. As Gary Gambill, formerly of the Middle East Intelligence Bulletin, unequivocally wrote in Foreign Policy earlier this month, “even embittered Syrian exiles often acknowledge that the Assad regime would be more repressive without Bashar in it.”

Assad’s anti-Western and anti-Israel foreign policy provides him with most of his legitimacy in the Arab world. Assad may still be young compared to other politicians in the region, but his age has not stopped him from using his platform of Arab resistance to build himself — and Syria — up as a major player in Middle Eastern geopolitics. Bashar’s rhetorical, financial, and logistical support to Hezbollah in Lebanon and Hamas in the Gaza Strip continues to boost his image as one of the most significant defenders of Arab social and political causes. Arab leaders such as former Egyptian President Hosni Mubarak and Yemen’s Ali Abdullah Saleh failed to obtain this same level of credibility due to their close association with, and outright dependency on, the United States. Indeed, the Annual Arab Public Opinion Survey conducted by University of Maryland Professor Shibley Telhami ranked Assad the most popular Arab leader in 2009.

This support has decreased over the past two years, and it has certainly diminished substantially over the past two months. Yet Assad’s unwillingness to cater to Washington’s demands continues to score him points with Syrians and other Arabs who are tired of their politicians touting an unconditional pro-Western line. This could help explain why, just as thousands of Syrians are protesting against the regime, thousands more are still leery of participating.

Assad’s anti-U.S. foreign policy will not help him withstand popular protests indefinitely. The actions of his security forces over the past month have had particularly detrimental effects to his political legitimacy and his personal character. Syrians that would normally be on the sidelines are now questioning whether Assad is truly a reformer, despite the creation of a new cabinet, Syrian naturalization of 250,000 Syrian Kurds, and the dissolution of the 48-year old Emergency Law. According to human rights activists embedded in the country, over 700 Syrian protesters have been killed since initial protests began in Daraa, and tension between the government and the people will only increase if more activists are gunned down. By all indications, an increase in violence is precisely what will occur if the current trend continues over the last two weeks. The government is currently using its army to root out and arrest anyone suspected of joining the demonstrations. Thousands have been arrested so far. The single biggest death toll during the entire crisis occurred April 22, with a reported 109 people killed in cities and towns across Syria after the completion of Friday prayers.

Further complicating the Syrian situation is the international community’s uncertainty over how to deal with the problem. The most confused actor to date has been the United States, which remains nervous about what might come after Assad. For all of the brutality and excesses of the Assad dynasty, the United States views the ruling Syrian Baath Party as a secular organization constantly on guard against Islamism in its own society. This was visibly demonstrated in 1982 when Hafez al-Assad sent in the Syrian army to quell a Muslim Brotherhood uprising in the city of Hama.

In an age where Islamic extremism and terrorism continue to dominate Washington’s foreign policy relations in the Middle East, the Obama administration has been careful not to prematurely push Assad overboard. White House rhetoric is heating up, President Obama’s National Security Council continues to demand that Assad halt the killing of unarmed protesters, and the administration has recently drafted individual sanctions. But in the case of Syria, Washington has yet to adopt the regime-change outlook that became so prevalent during the Tunisian and Egyptian uprisings.

Though revolting to some, this course of action may be Washington’s best short-term fix. The Saudi royal family, which above all is intent on promoting regional stability, has already made its concerns known over what a post-Assad Syria could look like. Israel, which is arguably the Syrian government’s most potent adversary in the region, is also monitoring the events in Syria closely. According to conventional wisdom, Israel should be rooting for the Syrian protesters, due to Assad’s contributions to anti-Israel groups. However, Syria has kept its border with Israel quiet since the 1973 Arab-Israeli war. Much like post-Mubarak Egypt, a post-Assad Syria might take the country in a brand new foreign policy direction vis-à-vis Israel, for instance rekindling the Golan Heights conflict.

In other words, the demonstrations currently sweeping Syria have generated a complex set of choices for the United States and other countries. Syrian demonstrators view their actions as a drive for more political representation and civil rights. The rest of the world, however, is still undecided about how to achieve those goals in Syria.

Daniel DePetrisDaniel R. DePetris is an M.A. student in the Maxwell School of Syracuse University, an associate editor of the Journal on Terrorism and Security Analysis, and a contributor to Foreign Policy In Focus. He blogs at the Atlantic Sentinel.