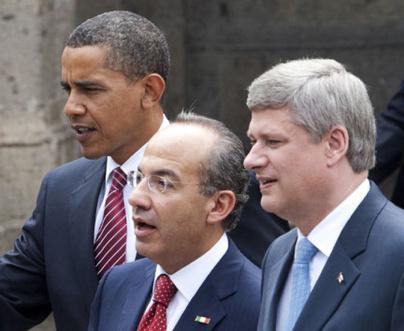 The United States is leading the way to another corporate-friendly free-trade agreement, and it's bringing its NAFTA partners along for the ride.
By Manuel Perez-Rocha, Stuart Trew | July 26, 2012 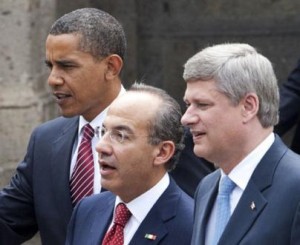 The United States recently announced that Canada and Mexico will join negotiations for the Trans-Pacific Partnership (TPP)—a secretive U.S.-led multinational trade and investment agreement currently being negotiated with eight other countries in the Pacific Rim region.

On the other side of the Pacific, Japanese legislators are defecting in droves to try to stop the country’s entry into the negotiations. But the situation is much different in Canada and Mexico, which were admitted to the table with much fanfare during the G20 summit in June. The Japanese response is justifiable, and a recent statement of solidarity against the TPP by North American unions offers a good building block for resisting an agreement that for Mexicans and Canadians amounts to a neoliberal expansion of NAFTA on U.S. President Barack Obama’s terms.

Mexico and Canada had been trying to secure a spot at the TPP table for months prior to the G20, and it became a leading story in both countries. Their anxiety played nicely into Obama’s hands, allowing the U.S. trade representative to put humiliating entry conditions on both countries — essentially giving these NAFTA neighbors a second-rate status, or what in Spanish is called convidados de palo (to be invited but without a say). Neither Canada nor Mexico will be able to see any TPP text until they finally join the negotiations in December, following the required 90-day U.S. congressional approval process. Once at the table, they will not be able to make any changes to the finished text or propose any new text in the finished chapters. There is a very real possibility that the existing TPP countries, the United States in particular, will use the following months to fashion a trap for the TPP latecomers.

While most media outlets welcomed the NAFTA partners to the TPP table, national labor federations from the United States, Mexico, and Canada were cautious for very good reasons, and it wasn’t just the obviously imbalanced negotiating dynamic. On July 11, the AFL-CIO, the Canadian Labour Congress, and the National Union of Workers (UNT) of Mexico outlined some of those reasons in an important statement of solidarity, which included a vision of what they believe a 21st-centry trade agreement should look like.

The labor unions state that although they “would welcome a TPP that creates good jobs, strengthens protection for fundamental labor rights—such as freedom of association and authentic collective bargaining—protects the environment, and boosts global economic growth and development for all, American, Canadian, and Mexican workers cannot afford another corporate-directed trade agreement.” The joint statement explains that to have any positive effect on the region, “the TPP must break from NAFTA, which imposed a destructive economic model that expands the rights and privileges of multinational corporations at the expense of working families, communities, and the environment.”

The unions conclude that if “the TPP follows the neoliberal model and substitutes corporate interests for national interests, workers in all three countries will continue to pay a high price in the form of suppressed wages, a more difficult organizing environment, and general regulatory erosion, even as large corporations will continue to benefit.” Unfortunately, by all accounts, including leaked TPP chapters and statements from the U.S. trade representative, this is exactly what the Obama administration hopes to achieve through these negotiations.

Instead of breaking with NAFTA, the TPP expands it in almost every chapter, from intellectual property rights to “regulatory coherence,” and from rules for increased “competition” in state-owned enterprises to opening government purchases to foreign bidders.

Particularly worrying to Canadians and Mexicans, and not mentioned in the joint statement from North American unions, are the extreme investors’ rights foreseen in the TPP. Under NAFTA, Mexico and Canada continue to be pummelled by investor-state lawsuits from U.S. and Canadian companies, or international firms using their U.S. registration to challenge government measures that can be shown to interfere with profits, even if that interference is not intended. These investment disputes, launched under NAFTA’s Chapter 11 protections, have resulted in hundreds of millions of dollars in fines or settlements to be paid out from public funds. Two recent cases against Mexico and Canada help describe the problem.

In 2009, two separate NAFTA investment panels established through the International Center for Settlement of Investment Disputes (ICSID) ruled in favour of U.S. companies Cargill and Corn Products International in their nearly identical cases against a Mexican tax on drinks containing high fructose corn syrup (HFCS), a sugar alternative. The tax was a means of levelling the playing field for Mexican cane sugar producers, who were having no luck accessing the U.S. market on equal terms to U.S. sugar producers despite NAFTA’s promises of open borders.

Cargill and CPI argued in part that the Mexican tax made soft drinks sweetened with HFCS less competitive on the Mexican market, depriving them of their national treatment rights in NAFTA. The ICSID panels did not agree that the HFCS tax amounted to a form of regulatory expropriation or performance requirement as the firms had also argued, but did agree on the national treatment claim. Cargill was awarded more than $77 million and CPI more than $58 million in damages. In the CPI case, the ICSID panel deprived Mexico of any countermeasures to defend against a one-way inflow of cheap sugar supplements from the United States.

Canada also just lost an important investor-state dispute with Exxon Mobil, which could cost the Canadian government as much as $65 million. At issue were measures requiring offshore oil and gas producers in the province of Newfoundland and Labrador to turn over a portion of their profits to research and development or education and training programs. A NAFTA investment panel ruled in favor of the company, which claimed that the measures were an illegal performance requirement on the firm. Three Canadian courts had previously upheld the legality of the measures, and the Canadian government had excluded the legislation enforcing the measures from national treatment and other investment protections in NAFTA, making the investment panel ruling extremely perplexing. The frustration is worsened by the fact that Exxon Mobil was the richest company in the world in 2011. Under NAFTA and the TPP, investors have rights but no enforceable responsibilities to the countries in which they are operating.

These are just two local cases amid a myriad of investor lawsuits against countries all over the world. Though the Obama administration recently released a new model Bilateral Investment Treaty, it is almost identical to NAFTA, with only modest safeguards for regulation in the public interest — safeguards that closed-door tribunals are under little obligation to take into account. In fact, the trend globally is for these secret tribunals to rule expansively in the interest of corporations, perhaps as a means of perpetuating the system by making it more attractive to investors. There is simply no justification for reproducing the investor-state dispute regime in the TPP. In fact, NAFTA should be renegotiated to remove investor-state dispute settlement from Chapter 11.

This outcome—removing extreme investment protections from the TPP—is not out of the question. In June of this year, before a negotiating round in San Diego, California, 130 state legislators from all 50 states and Puerto Rico signed a letter to President Obama’s senior trade official warning that they will oppose the deal unless the administration alters its current approach. In the letter they say that “Our experience with NAFTA and other trade deals shows that investor-state dispute settlement is used by large corporations to undermine state and federal laws they don’t like – laws that are fully constitutional, that do not discriminate, and that are needed to protect public health and safety.”

There is also the question of Australia, the one TPP partner refusing to abide by these investment rules. In April 2011, the Australian government released a new trade policy that discontinues the inclusion of investor-state dispute settlement in bilateral or regional trade agreements. Despite their second-rate status at the TPP table, Canada and Mexico could eventually help the United States put pressure on Australia and others who doubt the value of these extreme corporate rights. But public pressure might prove strong enough to foil these efforts, as it did when the Multilateral Agreement on Investment was ditched in 1999, followed by the Free Trade Area of the Americas (FTAA) in 2005.

A New FTAA, A New Struggle

With Canada and Mexico joining the TPP, the agreement is looking more and more like a substitute for the FTAA. So it is not surprising that opposition to the TPP is growing as quickly as it did against that former attempt to expand the neoliberal model throughout the Western hemisphere.

The intense secrecy of the TPP negotiations is not helping the Obama administration make its case. In their statement, North American unions “call on our governments to work with us to include in the TPP provisions to ensure strong worker protections, a healthy environment, safe food and products, and the ability to regulate financial and other markets to avoid future global economic crises.” But the truth is that only big business is partaking in consultations, with 600 lobbyists having exclusive passwords to online versions of the negotiating text.

A majority of Democratic representatives (132 out of 191) have expressed that they are “troubled that important policy decisions are being made without full input from Congress.” They have written to U.S. Trade Representative Ron Kirk to urge him and his staff to “engage in broader and deeper consultations with members of the full range of committees of Congress whose jurisdiction touches on the wide-ranging issues involved, and to ensure there is ample opportunity for Congress to have input on critical policies that will have broad ramifications for years to come.” In their letter, the representatives also challenge “the lack of transparency of the treaty negotiation process, and the failure of negotiators to meaningfully consult with states on the far-reaching impact of trade agreements on state and local laws, even when binding on our states, is of grave concern to us.” U.S. Senators, for their part, have also sent a letter complaining of the lack of congressional access to the negotiations. What openness and transparency can we in Canada and Mexico expect when the decision to join the TPP, under humiliating conditions, was made without any public consultation?

NAFTA turns 20 years old in 2014. Instead of expanding it through the TPP we must learn from NAFTA’s shortcomings, starting with the historic lack of consultation with unions and producers in the three member countries. It is necessary to correct the imbalances in NAFTA, which as the North American union statement explains enhanced corporate power at the expense of workers and the environment. In particular, we need to categorically reject the investor-state dispute settlement process that has proven so costly, in real terms and with respect to our democratic options in Canada and Mexico. The unions’ statement of solidarity provides a strong foundation for the growing trinational opposition to the TPP in Leesburg, Virginia, and beyond.

Manuel Perez-Rocha, Stuart TrewStuart Trew is the trade campaigner for the Council of Canadians.Manuel Pérez Rocha is a Mexican national and an associate fellow at the Institute for Policy Studies in Washington D.C. They are both contributors to Foreign Policy In Focus.