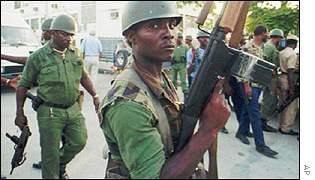 Haiti badly needs to provide for its own security, but it should avoid reconstituting its coup-prone army.
By W. Alex Sanchez | June 29, 2012 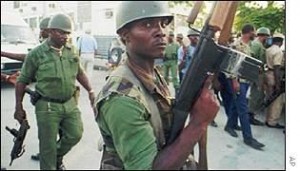 Haitian President Michel Martelly finds himself in an increasingly difficult position on the military question. In mid-May, several former army officers met with Martelly and urged him to uphold his presidential campaign promise that, if elected, he would reintroduce the army.

But this is one pledge the Haitian president should renege on. The Haitian military is notorious for its history of corruption, violence, and disrespect for human rights. If the army is reconstituted — which would be a worst-case scenario for Haiti — Washington should sharply restrict the security assistance it provides Port-au-Prince in the future.

A Brief History of Violence

Any analysis of the historical instability, corruption, and violence in Haiti must touch on the country’s infamous dictator, Francois “Papa Doc” Duvalier, who came to power in a 1956 military coup. The Duvalier family depended on the armed forces to remain in power for decades. “Baby Doc” Jean-Claude Duvalier, Francois’ son, became president in 1971 and ruled until 1986, when he fled the country amid protests and under U.S. pressure. A National Council of Government was formed, comprised of military officers, including General Henri Namphy and a number of civilians charged with facilitating the country’s return to democratic rule.

Haiti’s subsequent experiment with democracy was short-lived. In 1988 General Namphy overthrew the elected president, Leslie Manigat, and installed a civilian government under military control. Government control continued to switch between civilian and military leadership. In 1991, Brigadier General Raoul Cedras overthrew President Jean-Bertrand Aristide, who had been elected the previous year. The country then witnessed a period of unrivaled brutality and the dire consequences of military rule. After several years of violence by the ruling junta, the military was pressured to relinquish control in 1994 amid fears of a U.S. military invasion (though the United States was criticized at the time for offering military leaders bribes, or “golden parachutes,” to resign). Ultimately, the Clinton administration deployed up to 20,000 Marines to oversee the return of pseudo-democracy, whereby Aristide was again nominally in control but hardly in a position to lead.

Nevertheless, even after the army was disbanded, former soldiers continued to sow instability, as exemplified by the 2004 violence that toppled President Aristide during his second presidential term. In March of that year, rebel leader Guy Philippe told journalists that he was the new head of Haiti’s military: “I am the chief…the military chief.” A former police chief from 1995 to 2000, Philippe had links to drug trafficking in the country and was allegedly among the masterminds of an attempted uprising in December 2001.

Calls for the reconstitution of Haiti’s military have escalated considerably since the country’s devastating 2010 earthquake. The 7.2-magnitude quake struck the island just as Haiti was beginning to establish some kind of internal stability after Aristide’s 2004 overthrow and to prepare for congressional elections. Thousands died in the earthquake. The natural disaster exhausted the capabilities of the Haitian government as well as the capabilities of the UN Mission to Haiti (MINUSTAH). The challenges they faced immediately after the quake included dealing with internal security issues like looting, assembling security units to provide aid to civilians and to protect sensitive areas, and apprehending the 5,000 prisoners that had escaped from the national penitentiary, as well as neutralizing gangs and stemming the tide of street crime.

Even before the quake, Haiti suffered from a number of internal security issues, like drug trafficking and rampant corruption within the Haitian police force. It is unclear how widespread the consumption of cocaine and other illegal drugs is in Haiti, but the island of Hispaniola certainly serves as a major transit point for drugs coming from South America to the United States or Europe. In June 2005, Haiti’s former national police commander, Rudy Therassan, pleaded guilty to offering to protect Colombian cocaine shipments in the country. He was sentenced to almost 15 years in prison. Similarly, in early May 2007, the police in Port-de-Paix arrested nine individuals suspected of involvement in illicit drug trafficking, seizing more than 200 kilograms of cocaine.

The question remains: why should Haiti reinstitute a military force instead of investing in a better police force or a national constabulary? Countries like Panama and Costa Rica have achieved reasonable success in dealing with internal security issues despite their lack of militaries. Furthermore, considering the generally stable relations between Haiti and the Dominican Republic in recent years, where would an external security threat to Haiti originate? Interstate combat between the two countries remains highly implausible. In fact, after the earthquake struck, the Dominican Republic sent up to 150 troops to join MINUSTAH to help with rescue and relief operations. A February 2010 report in The Wall Street Journal noted that less than 48 hours after the earthquake struck, Dominican President Leonel Fernández met with then-Haitian President Rene Préval in the Haitian capital in a demonstration of solidarity.

To be fair, suggestions about reinstating the armed forces in Haiti have come not only from disgruntled former Haitian soldiers. Shortly after the 2010 earthquake struck, a former U.S. diplomat to Haiti, Ambassador William Jones, argued on CNN that disbanding the army “was a mistake because whenever you have a natural disaster such as this, the first thing we do is to call out the national guard. Well, there is no national guard in Haiti. There is no army. There is no force that can be deployed throughout Port-au-Prince to bring order. And without order it [will] be very, very difficult to coordinate the aid program.” Supporters of restoring the Haitian military also argue that it would help bolster the government’s internal control of the country, enforce the rule of law, provide security in the event of another disaster, and offer a source of employment and discipline to young Haitians.

The Need for Security

Reinstituting the military would be no easy task. Besides the political issues, there are basic logistical and financial components that must be overcome, something that the Canadian International Development Agency learned a decade ago. At the time, the Canadians were trying to train Haitian security forces at the Royal Canadian Mounted Police (RCMP) facilities in Regina, Saskatchewan. Speaking about the initiative in the mid-1990s, Timothy Donais, a Wilfrid Laurier University professor who has studied police reform in Haiti, explained to the Canadian National Post that you cannot simply provide six months of basic training to police officers, send them out into the street, and expect them to be police officers in the vein of the RCMP. He observed, “It’s easy to teach people the technical skills. It’s much harder to change the culture of a police organization.”

Moreover, if a Haitian military is reconstituted, the nation’s youth will be expected to make up its rank and file, but filling senior officer positions presents a greater challenge. One option may be to reinstate former officers who served until 1995 when the military was disbanded, but this would be an extremely risky move considering the former military’s propensity for coups.

In addition, Haiti remains a poor country, and unfortunately its economic situation is unlikely to improve in the near future. Hence, the government will have to focus its small budget on providing relief, reconstituting state services, and rebuilding infrastructure. A Haitian military — or a bigger police force, coast guard, or border patrol — could most likely come only from international aid, including the donation of equipment.

Haiti’s internal security issues and the possibility of future natural disasters make it a priority for the country to have well-trained and well-prepared security forces. But there is no logical reason to re-establish an army, as the training and weaponry soldiers require are simply not necessary for Haiti’s security needs. It would be much more advantageous for Haiti to devote its limited budget to improving the judiciary, the police, the coast guard, and special units, including border guards and prison security officials. There is reason to believe that the government is somewhat committed to this path. In late May, Reginald Delva, the secretary of state for public security and Mario Andresol, the director of the National Police, visited two specialized units of the National Police, CIMO and SWAT TEAM. The government officials promised new uniforms and vehicles, as well as the construction of new police stations, though it’s unclear when these promises can be fulfilled.

Armies are not trained for internal security, but rather for inter-state warfare. When they are deployed internally, human rights abuses usually occur. To patrol the streets of Port-au-Prince, Jacmel, or Jeremie, Haiti does not need a soldier with a machine gun on every corner, but rather properly trained and equipped police that know the national laws, as well as a detective corps that can carry out investigative work. In addition, Haiti would greatly benefit from a larger coast guard to patrol the country’s territorial waters for drug traffickers and smugglers.

In addition, these specialized security forces would have the advantage of providing employment to thousands of Haitians, which is particularly important in a country where high unemployment has exacerbated crime levels.

The key challenge to developing an effective security force is not one of training and equipment, but of creating a chain of command that has integrity and is loyal to elected rulers. The last thing Haiti needs is an unreliable security force that could sow future instability and undermine Haiti’s already fragile democratic society.

American personnel deployed after the earthquake have long left Haiti and returned to the United States. The question that remains is how MINUSTAH and the Haitian police will work together to keep the country under control in coming years. Ongoing protests near the UN mission after an outbreak of cholera (apparently caused by UN peacekeepers), along with accusations of rape by Uruguayan peacekeepers, have further aggravated popular discontent with MINUSTAH.

It is unclear how long MINUSTAH will remain in Haiti, and there are signs that some donor countries, particularly Brazil, are losing interest in this operation. If MINUSTAH leaves Haiti, it will be up to the government in Port-au-Prince and its security forces to monitor the country, both internally and externally. It is unlikely that Haiti’s police alone can deal with these issues in the near future, which may encourage the Haitian government to yield to the pressure of former soldiers to reconstitute the army. Whatever the country decides, Port-au-Prince will have to rely on international aid.

Haiti is an independent nation and its government can carry out whatever security initiatives it sees fit, free from the intervention of foreign powers. Nevertheless, if the army is reconstituted, Washington should set strict limits on the kind of assistance it is willing to offer Port-au-Prince. For example, instead of military advisors, Washington could offer police advisors or decommissioned cutters and other vessels to improve the capabilities of Haiti’s coast guard. It would then be up to the Haitian government whether to accept or refuse this aid.

The United States has a controversial and problematic history with Haiti. But by limiting the amount of military-related aid it is prepared to give Port-au-Prince for internal stability, Washington would go a long way toward helping avoid future tensions in the troubled Caribbean state.

W. Alex SanchezW. Alejandro Sánchez is a contributor to Foreign Policy In Focus and a research fellow at the Council on Hemispheric Affairs where he focuses on international security and geopolitical issues. His personal blog can be found by clicking here.