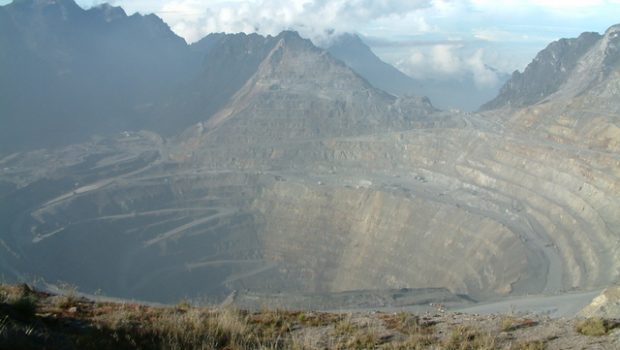 During Genocide, Trump Intervenes for Himself and Friends

In Papua New Guinea, the Trump administration is combining its fondness for extractive industries with its disregard for human rights.
By Alec Dubro | August 4, 2017

The Grasberg Mine is a massive scar 14,000 feet atop West Papua’s part of New Guinea’s Central Cordillera. It’s is the world’s biggest, most profitable gold mine and the world’s third biggest copper mine, with estimated reserves of $100 billion.

Some 20,000 people work there, making it the largest employer on the divided island and the largest source of revenue in all of Indonesia. Many of those engaged in the dangerous work of mining come from the 40,000-year-old indigenous community of New Guinea, a people the Indonesian authorities are slowly pushing into non-existence.

In 1962, the Indonesians, with the connivance of the US, grabbed the western half of New Guinea. Since then, the destruction of the environment and the local communities has advanced as Indonesians displace the indigenous population and scramble over valuable resources. Although Indonesia has barred a full accounting, there have been hundreds of thousands of deaths—many in the most brutal and deliberate fashion.

Responsibility for the destruction and slow genocide now rests securely with the Indonesian government. But the US continues to defer to its ally in the same way it does to, say, Saudi Arabia: in short, weak complaints and no action.

But to see how the current US administration does bring its power to bear on Indonesia, let’s turn to yet another scandal involving Donald Trump. Last April 20, Mike Pence made an unexpected trip to Indonesia where he discussed one pressing matter of business with his hosts: The Grasberg mine in West Papua.

Right now, Indonesia is grappling with the mine owners and operators, Phoenix-based Freeport-McMoRan, trying to abrogate a treaty from the Suharto era that ceded control to the Americans. Jakarta has wrested 50 percent of the mine. Now it and wants it all, essentially threatening to expropriate Grasberg, which is the largest source of income in all of Indonesia.

Enter Donald Trump. Unlike the previous president, Trump never lived there nor does he speak Indonesian. But he does own two hotel projects going up in Java and Bali. And Trump is working in partnership with Indonesian billionaire, Hary Tanoesoedibjo, known in the media as Hary Tanoe or, simply, Hary. He’s also known as the Indonesian Donald Trump.

According to Forbes, Tanoe “built his fortune—estimated $1.1 billion—in real estate and media on a mountain of debt. He tweets nonstop to more than 1 million followers. He stages beauty pageants. He loves reality TV. He has a glamorous wife.” And Tanoe’s considering a run for the presidency. Trump and Tanoe are close enough that the Indonesian attended Trump’s inauguration, even as he remains embroiled in a series of scandals and fights with the government.

But Trump is more directly tied to Grasberg through billionaire wheeler-dealer Carl Icahn. The former corporate raider is Trump’s good friend and, according to Trump, one of “the great businessmen of the world.” In January, Trump named Icahn “special adviser to the president on regulatory reform.” Although the role has no official standing, it worked magic for Icahn: his oil company, CVR, “saved about $60 million in the first quarter because of expectations that the federal government will ease a regulation involving renewable fuels.”

More to the point, Icahn is also the largest shareholder in Freeport-McMoRan with 91.6 million shares worth over $1 billion, or 6.33 percent of total shares. When Jakarta moves to weaken Freeport, Icahn’s stake sinks.

So, it’s not entirely surprising that Pence was on assignment for Trump, Inc. And within hours after Pence departed, Jakarta relented… somewhat. Freeport McMoRan was granted a six-month reprieve from takeover. Freeport wasn’t entirely happy, but it had benefited from a presidential intervention.

The ongoing scandal, though, isn’t the machinations of Trump and Jakarta. Rather it’s the reluctance—bordering on refusal—of Washington to do anything effective to alleviate the genocide and destruction in West Papua.

There have been some past US efforts: USAID projects in West Papua, notations by the State Department in its human rights reports, occasional congressional hearings. But all are constrained by the US geopolitical relationship with, ironically, the world’s largest Muslim nation.

Washington needed an anti-communist Indonesia during the Cold War—which led to the Sukarno massacres of 1965. And Washington now needs Indonesia as a defense against China. The lives of the Papuan people are simply an inconvenient obstacle. Trump, Icahn, and Freeport will play their games, but the Pentagon will ultimately prevail.